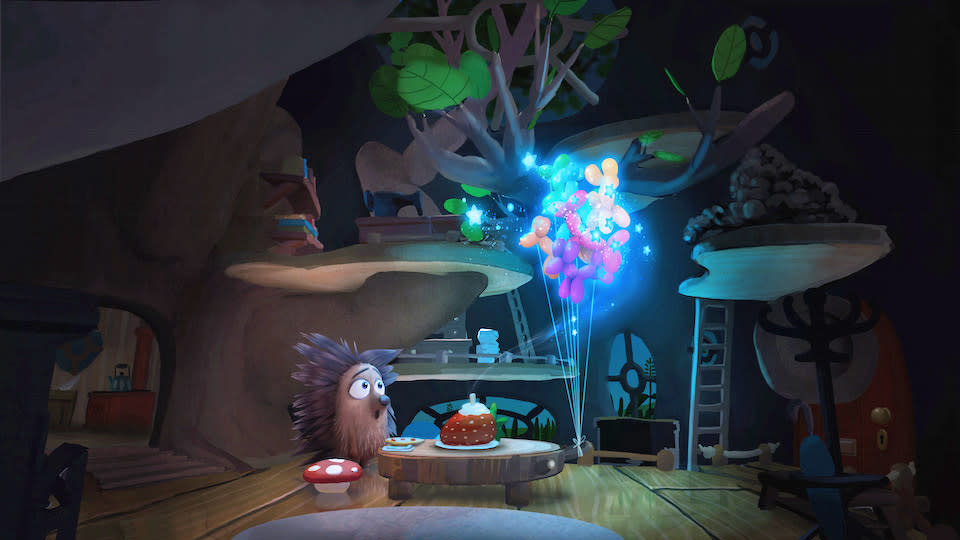 Oculus' big push into cinema began at the 2015 Sundance Film Festival, where it introduced its VR filmmaking endeavor, Story Studio. Back then, the company debuted Lost and revealed a list of other shorts it had plans for -- though it didn't go into much detail about them. Today, however, we're getting to know Henry, the second film from the virtual reality studio. Directed by Ramiro Lopes Dau, who previously worked on animation for Pixar's Brave and Monster University, Henry tells the story of a cute hedgehog that has trouble making friends because of his appearance. Oculus Story Studio describes it as a heartwarming comedy. "One of the cool things about Henry is that we're incorporating more of that interactive discovery, where you can find his photo album and see elements of it brought to life," Oculus Story Studio Producer, Edward Saatchi, told me in an interview recently. "You can feel as though you're discovering parts of his story, which is really powerful. You'll have a greater agency of discovering elements of his house."

Rift owners will be able to experience Henry for free when the consumer headset ships in 2016, Oculus says in a blog post. The film is slated to debut later this year (perhaps at E3?), but you can watch the trailer right now.

In this article: Facebook, hands-on, hdpostcross, Henry, Oculus, Oculus Story Studio, OculusStoryStudio, OculusVR, VirtualReality, VR
All products recommended by Engadget are selected by our editorial team, independent of our parent company. Some of our stories include affiliate links. If you buy something through one of these links, we may earn an affiliate commission.