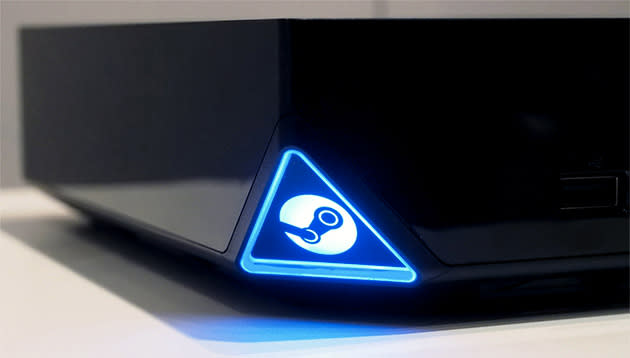 Look, there's literally no shortage of things you can slot into your home theater system for a spot of streaming media or some melt-into-your-couch gaming. If you want to be able to recline in your living room and comfortably sneer at people who play games on consoles, though, you can pre-order an official Steam Machine -- and the accoutrements to make it shine -- starting today.

In case you haven't been closely following the Steam Machine saga, Valve first unveiled its vision of living room domination -- high-powered PCs running a special Steam-flavored version of Linux -- in September 2013. Anyone can shove a PC into a sleek box and proclaim its chops as a seriously console competitor (and we've seen a few already), but really, it's about time these things emerged from the vapor. Up for pre-release grabs right now are rigs from Alienware and CyberPower, which start at $449 and $499 respectively. That base model Alienware Steam Machine will pack a dual-core Intel Core i3-4130 chips, along with 4GB of DDR3 RAM, a 500GB hard drive and a (mostly unspecified) NVIDIA GeForce GTX graphics card with 2GB of GDDR5 memory. Meanwhile, you'll spot one of Intel's Core i3-4160 chips and a NVIDIA GeForce GTX 750 lurking away in CyberPower's poorly named Syber box, not to mention the same (relatively paltry) 4GB of RAM and 500GB hard drive.

If none of that means much to you, just know this: even at their most rudimentary, both machines will give your Xbox or PlayStation some solid competition. Oh, and naturally, you can throw more money at both companies involved to trick out your home theater computer even further. Just to top it all off, a pair of Steam Machine accessories are up for pre-order too -- $49 will nab you one of those funky looking Steam Controllers or the Steam Link, a tiny box that'll let you stream games from your existing gaming rig to any TV in the house. Normally you'd have to wait until November 10 to pick all these goodies up, but some immediate pre-order action might mean you'll get your Steam Machine a full month ahead of everyone else.

In this article: alienware, cyberpower, gaming, hdpostcross, pc, steam, steam machine, steam machines, steammachines, steamos, valve
All products recommended by Engadget are selected by our editorial team, independent of our parent company. Some of our stories include affiliate links. If you buy something through one of these links, we may earn an affiliate commission.