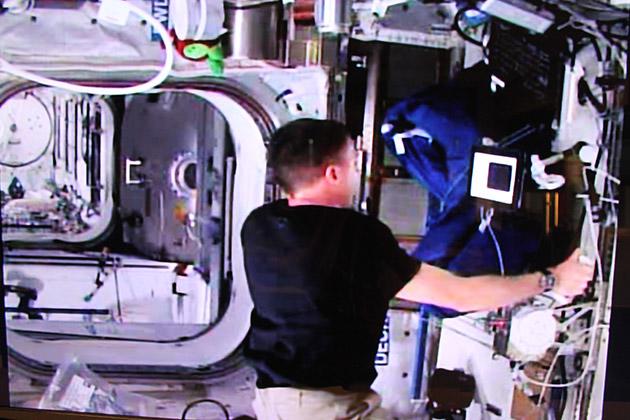 NASA astronaut Terry Virts is part of the current ISS crew, while ESA telerobotics specialist André Schiele is in the Netherlands. Thanks to two special joysticks with force feedback in both locations, though, they were able to "shake hands" during a recent demo of the first space-to-ground remote control. They took turns to move their respective joysticks, while the other felt the movement through theirs. Schiele said "[i]t felt as though Terry was extending his arm down from space to shake [his] hand." This is the first time the technology was tested between two people -- astronaut Butch Wilmore tried it alone in the past -- and it seemed to work great even if the ISS was in orbit, flying over 3,000 miles away from the Netherlands at that moment.

The European Space Agency plans to use to the technology for future rover missions. See, it takes 12 minutes for a command from Earth to reach a Mars rover, and it would take a lot longer if the rover's perched on a farther planet or moon. So instead of sending commands to a rover from Earth, the ESA wants an astronaut aboard a spacecraft orbiting the target celestial body to control it. During Virts' and Schiele's test, they only experienced a 0.8 second lag -- that's pretty much negligible when you consider the fact that the signals traveled through Houston mission control, across the vast Atlantic Ocean and to/from outer space.

It's worth noting that Virts had a real time video of the ground, superimposed with augmented reality elements, telling him the direction and force he needs to exert on the joystick. Those elements might be incorporated into a rover's control system in the future. Before the technology can be put in charge of billion-dollar space machines, though, it has to be tested further. For the next round, ESA plans to conduct blind tests using different objects made of foam to determine if astronauts can detect an item's hardness remotely. That could become an important feature when picking up sample rocks, dust, ice, et cetera from extraterrestrial lands.

[Image credit: ESA–J. Harrod]
In this article: esa, space
All products recommended by Engadget are selected by our editorial team, independent of our parent company. Some of our stories include affiliate links. If you buy something through one of these links, we may earn an affiliate commission.