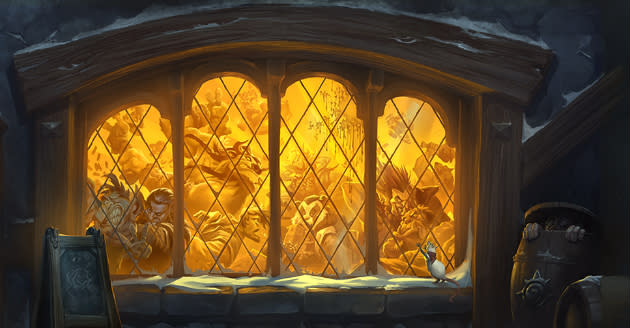 Hearthstone, the massively popular digital card game from Blizzard, is getting a new mode that pits players against each other, one-on-one, in weekly battles with special rules. The mode is called Tavern Brawl and it's due to launch in mid-June. Tavern Brawl allows players to battle strangers or friends, though only for a limited time each week. "One week might feature preset decks, while another week could have you crafting a brand new Tavern Brawl deck following specific guidelines, while others might offer buffs to specific minion types—who knows!" Blizzard writes.

Tavern Brawl will be free "when the new mode becomes available" -- which could imply charges in the future -- and players will need at least a level-20 Hero before joining the fray. Otherwise, Tavern Brawl hits Hearthstone in patch 2.7 later this month. Also in that update, grab some customizable decks and new Heroes.

In this article: Activision, Blizzard, hearthstone, tavernbrawl
All products recommended by Engadget are selected by our editorial team, independent of our parent company. Some of our stories include affiliate links. If you buy something through one of these links, we may earn an affiliate commission.