David Attenborough's hologram will help you study fossils in VR 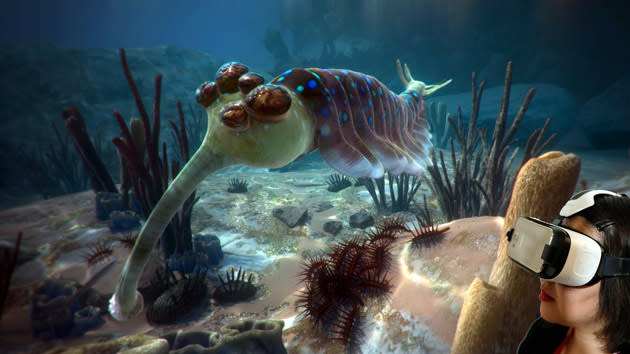 Wildlife documentarian and hypnotizing narrator Sir David Attenborough will finally lend his storytelling expertise to the fledgling medium of virtual reality later this month, in a special exhibit opening at London's Natural History Museum. As stunning as the HD footage that typically accompanies Attenborough's shows may be, for the past year the presenter has been working with Alchemy VR, a partnership of Atlantic Productions and Zoo VFX, to create even more engaging experiences using VR. A 15-minute adaptation of 2010 miniseries First Life, which uses CGI to reconstruct our prehistoric oceans and the beasts lurking within, is the first Attenborough VR project ready for general release, and it'll be debuting at the museum on June 19th.

For £6.50 a pop, visitors will be invited to don one of Samsung's Gear VR headsets and get face-to-face with some of the earliest forms of life to inhabit our seas. Attenborough's mellow narrative will be your personal guide, of course, but to some extent, exploration of this virtual world will be in your hands. The First Life experience is one of a number of VR projects Attenborough and Alchemy are invested in. The next is expected to be released later this year, and should serve as further proof virtual reality as a medium has plenty to offer non-gamers.

In this article: DavidAttenborough, firstlife, gearvr, naturalhistorymuseum, samsung, samsunggearvr, virtualreality, vr
All products recommended by Engadget are selected by our editorial team, independent of our parent company. Some of our stories include affiliate links. If you buy something through one of these links, we may earn an affiliate commission.