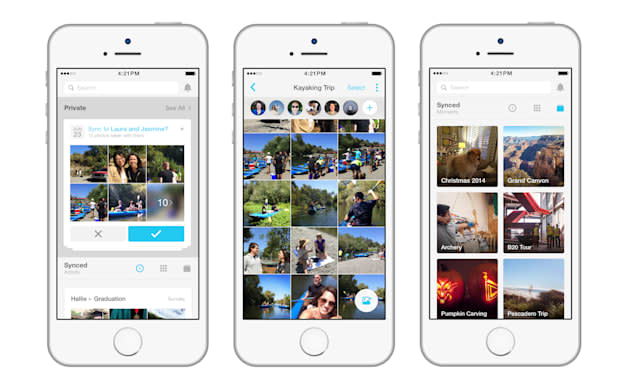 Facebook's Creative Labs has produced yet another app that feels like it should be a feature within the main Facebook app rather than another icon taking up space on your smartphone. The new Moments app creates shared photo albums from a group of people at an event. Photos are curated using location information and facial recognition, individuals can share and see photos from friends that were at the same place at the same time. So instead of everyone taking a photo of a sunset, one person can take it and share it with the group via the standalone app. The technology used in the app is based on the Facebook AI Research (FAIR) team's work. While the pitch is to share photos privately, shared photos can be uploaded to Instagram and downloaded to a user's camera roll. So they're private until a friend decides to put that weird face you made on their Instagram feed. Moments is available today for iOS and Android in the United States and will be rolling out to other regions over time.

In this article: Android, CreativeLabs, facebook, iOS, Moments, Photos, Sharing, SocialNetworking
All products recommended by Engadget are selected by our editorial team, independent of our parent company. Some of our stories include affiliate links. If you buy something through one of these links, we may earn an affiliate commission.