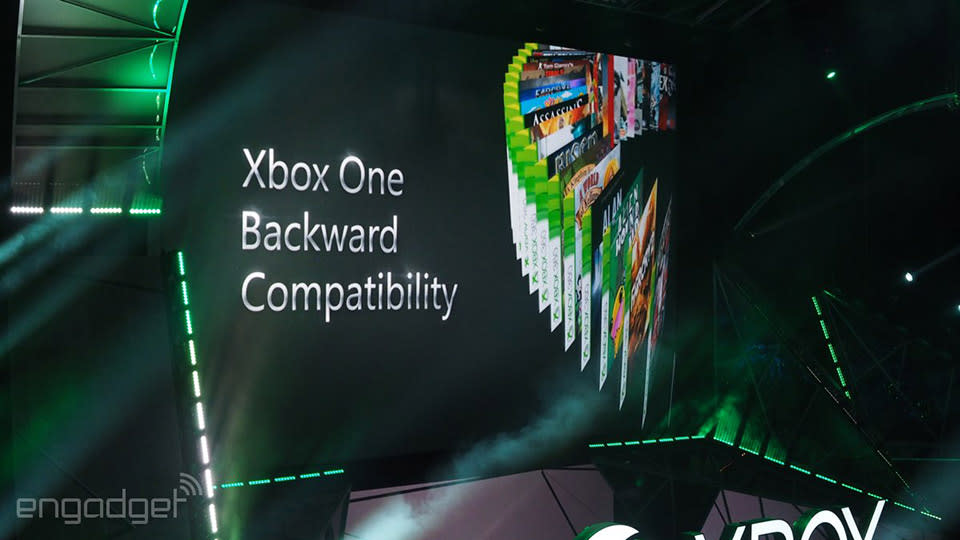 Fans of backward compatibility are getting their wish: Microsoft just announced that the Xbox One will be able to play Xbox 360 games, and if you're in the preview program you can start testing it today. Demonstrated onstage with Mass Effect, it's not exactly like the Xbox 360's implementation, since it's all digital. If you bought a game online and it's available, you just download it on your Xbox One and start playing. If you have it on disc, just pop the disc in and it will download so you can play, although you will need to have the disc in the tray for it to work. Additionally, on Xbox One you'll be able to to take advantage of new features like the Game DVR, screenshots and game streaming. Microsoft says it should have more than 100 games ready for the program when it launches for all this holiday season, and that all developers need to do is approve their games for the system to make them available -- no extra work should be required.

Check here for everything happening at E3 2015!
Microsoft took a chance to ding Sony for its PlayStation Now streaming setup too, promising, "Gamers won't have to pay to play games they already own." If you're in the Xbox preview program, you will be able to try this out later today with a limited set of titles. A teaser image for the feature showed off other games like Perfect Dark Zero, Gears of War, Super Meat Boy, Halo Reach, Halo 3, Shadowrun and Borderlands. We'll try it out once it launches, but wow, funny to see this here just two years after Don Mattrick called it "backwards."

Update: Microsoft updated its website with more information about the new program. The page confirms that this applies to digital and disc games, cross-console multiplayer is included, and it will pull over your cloud game saves, achievements, Gamerscore to the new system. This PDF lists all the games it currently works with -- excuse me while I dig up my Perfect Dark Zero Collectors Edition.

Get ready to play your #Xbox360 games on #XboxOne. #XboxE3 pic.twitter.com/emuzzpbOMa

Re Xbox One Back Compat: Game developers just need to approve titles showing up. Preview members will get it later today !

In this article: breaking news, E3, e32015, hdpostcross, microsoft, Xbox, Xbox One, Xbox360, XboxOne
All products recommended by Engadget are selected by our editorial team, independent of our parent company. Some of our stories include affiliate links. If you buy something through one of these links, we may earn an affiliate commission.