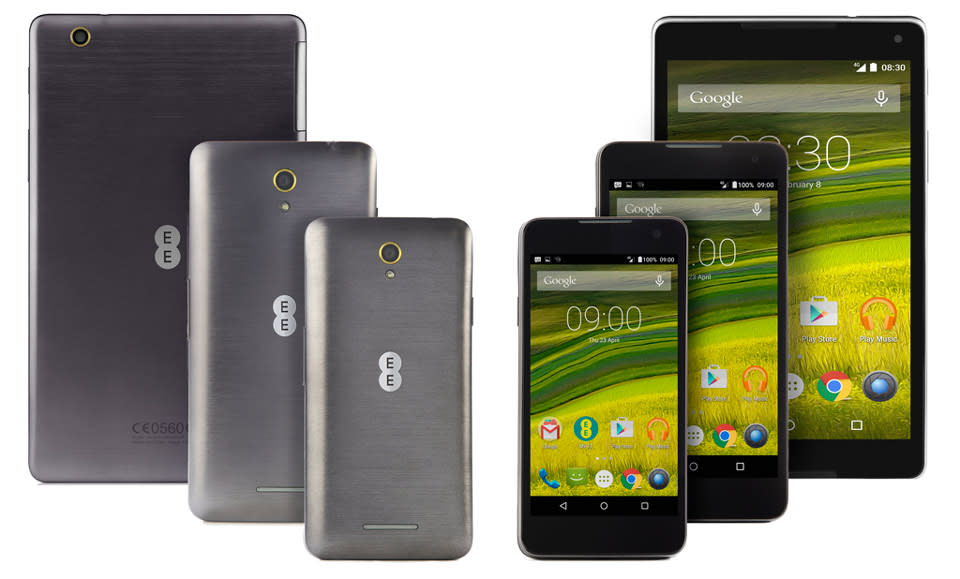 EE wasn't kidding around when it said its new "connected strategy" would yield a whole host of additional own-brand devices this year. Merely a week after launching the 4GEE action cam, the carrier is back with another new product bearing its logo: the Harrier Tab. Just as the recently released Harrier and Harrier Mini smartphones were designed to replace the older Kestrel, EE's latest tablet is the successor to last year's Eagle. On the specs front, the Harrier Tab heralds several improvements, including an 8-inch, 1080p display, octa-core 1.5GHz Snapdragon 615 CPU, 2GB of RAM and 8- and 2-megapixel cameras. You're also looking at Android 5.1 Lollipop, 16GB of internal storage (expandable via microSD), a 4,650mAh battery, and of course, Cat 4 LTE for taking full advantage of EE's 4G network.

The Harrier Tab is available across all EE sales channels from today for free on contracts from £18 per month, or for £200 on pay-as-you-go (the Eagle was the same price at launch). Unsurprisingly, it works out as the cheapest tablet EE now offers -- barring the lower-spec Alcatel OneTouch Pop 7S, anyway. If you're not that bothered about numbers on a spec sheet and are after a reasonably priced tablet for mobile internet access, though, then keep your eye on the Eagle. We imagine there could be some attractive discounts on the way as the older device prepares for retirement.

In this article: ee, EEharriertab, harriertab, tablet, uk-feature
All products recommended by Engadget are selected by our editorial team, independent of our parent company. Some of our stories include affiliate links. If you buy something through one of these links, we may earn an affiliate commission.