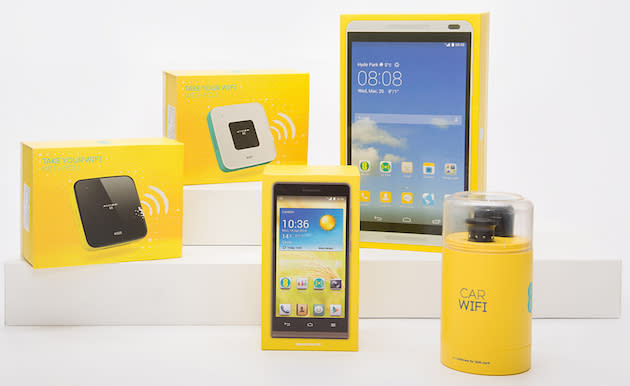 Something told us that when EE unveiled an own-brand 4G smartphone, a similarly-equipped tablet wouldn't be too far behind. The UK's biggest operator today confirmed it's launching a new 8-inch Android slate, it's called the Eagle and it'll set you back £199 on a pay-as-you-go tariff or £49.99 if you sign up to a £15 pay monthly plan. For that, you'll get a 1280 x 800 display, 1.6GHz quad-core processor, 1GB of RAM, 16GB internal storage and a 5-megapixel rear camera. That puts it on a level footing with Tesco's £119 Hudl, a tablet that has already enjoyed over half a million UK sales. The Eagle has an ace up its sleeve, though, offering built-in LTE connectivity that takes advantage of EE's double speed 4G network to deliver download speeds of up to 60Mbps. While it may lack the power and speedy updates that the LTE-capable Nexus 7 enjoys, EE's budget slate costs £100 less than Google's top-end tablet.

The Eagle isn't the only avian-themed device EE is unveiling today: there's also the Buzzard, a £49.99 plug-and-play 4G MiFi designed specifically for your car that'll let you add up to 10 connections; the Kite, a £69.99 MiFi for business users; and the Osprey, a slightly cheaper 4G WiFi unit designed for younger customers. All of the carrier's new devices will be available from May 28th -- we expect to get an Eagle in our possession, so keep an eye out for our full review in the near future.

In this article: 4g, eagle, ee, ee eagle, kite, lte, mobilepostcross, osprey, uk-feature
All products recommended by Engadget are selected by our editorial team, independent of our parent company. Some of our stories include affiliate links. If you buy something through one of these links, we may earn an affiliate commission.