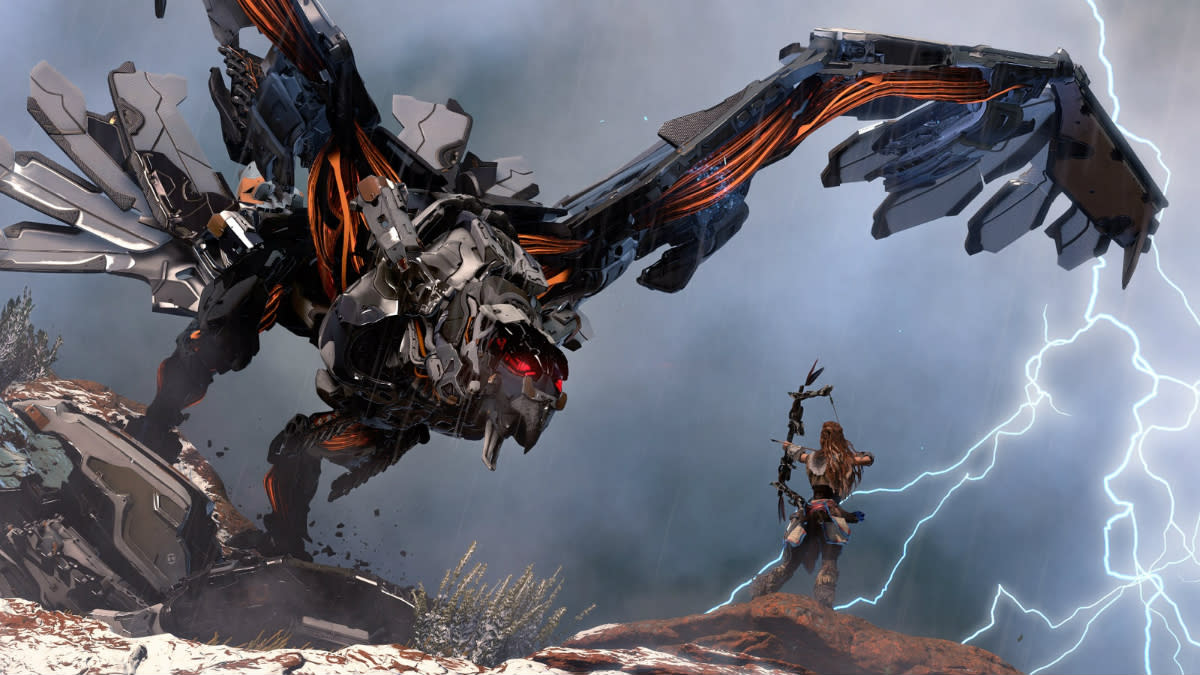 Horizon: Zero Dawn was a bright spot of Sony's E3 press conference, largely because it was so unexpected. It broke through the monotony of sequel and remake reveals, and it was surprising to see a new IP from Guerrilla Games, a studio that's been dedicated to the Killzone franchise since 2004. Horizon is a post-apocalyptic action, survival and crafting game starring Aloy, a huntress and expert archer who lives in a world where nature has overrun everything man ever built -- except for the robot dinosaurs. The violent, hulking, terrifying robot dinosaurs. During the game's reveal at Sony's conference, Aloy crouched through the brush, shot arrows through the metallic hearts of sleek silver beasts and absolutely dominated a gigantic, robotic monster. Turns out, that was only the half of it.

Aloy is special. She's a master craftswoman and an agile hunter. She understands things about this strange, post-apocalyptic world that no one in her tribe does, and she understands physics in a way that no one else can. This means there's an emphasis on crafting in her world, Guerrilla Games explains during Horizon's first-ever live, public gameplay demo.

When Aloy kills a robotic beast -- whether by setting traps and tripwires, shooting it with arrows or taking it down hand-to-hand, silently -- she can loot its remains for parts. She doesn't love slaughtering these animals, even though they're composed of metal and electricity that she needs to survive. During the live demo, Aloy creeps up on a beast called a "Watcher" and takes it down stealthily; as it dies she says, "Sorry little one." She cares for these robots as if they were alive, and they very well might be. Aloy resides in a tribal society that knows nothing of the skyscrapers, vehicles and technological feats of humankind's past, and these beasts are, by all appearances, sentient. In Aloy's mind, she just slaughtered something akin to a gazelle or a deer. There are specific types of robot animals: Watchers guard the herd and send out a screech if they see a threat, while Grazers travel in groups and carry glowing green canisters on their backs (these cans are hugely important to Aloy's society and, in the demo, she is on a mission to collect them). Each of these creatures is roughly the size of a velociraptor, and they're mostly harmless. Most of the Grazers, for example, will simply run away from a threat, though a few will stay behind to defend the herd. Aloy takes two down by diving away when they charge and shooting them from afar.

And then there's the Thundermaw. Guerrilla Games breaks down some numbers for this gigantic, angry animal: It's 80 feet long by 30 feet tall (roughly the size of an adult blue whale); it has 93 destructive elements along its body, all of which Aloy can shoot to reveal weak points; and it has 12 attacks, including a tail swipe and long-range projectiles. The Thundermaw is huge, but Aloy is faster and she's able to shoot arrows directly into some of its weak points. She also has electrical ammo that stuns the beast, plus trip wires that can hold it in place for a while. Aloy can also pick up weapons that fall off of the Thundermaw as she fights it. It's a big, fierce battle. When Aloy wins, it's truly triumphant.

There's much more mystery in Horizon. Guerrilla has crafted an expansive, fully explorable world -- Aloy can travel to every point she sees, including to the tops of distant mountains, the studio says. By the time Horizon launches in 2016 for PlayStation 4, we'll probably have more answers about Aloy's role in her society, the world in which she resides and the robot dinosaurs that she's fighting -- but we probably still won't know the half of it.

In this article: e32015, GuerrillaGames, hdpostcross, horizonzerodawn, sony
All products recommended by Engadget are selected by our editorial team, independent of our parent company. Some of our stories include affiliate links. If you buy something through one of these links, we may earn an affiliate commission.