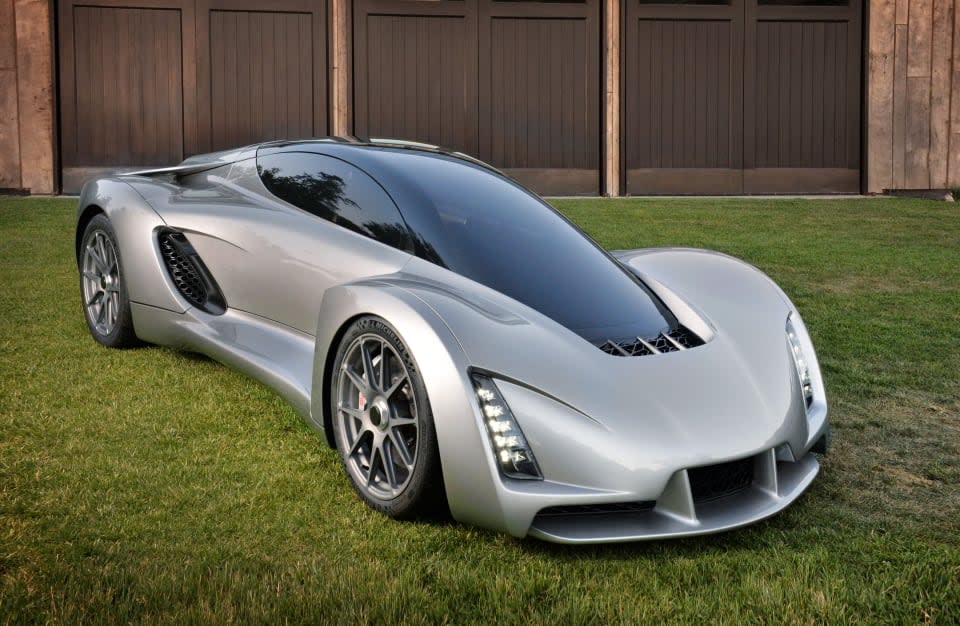 3D printing technology has already revolutionized the aeronautics industry. Manufacturers can create lighter, stronger components at a fraction of the time and cost of traditional production methods. Now a San Francisco-based startup called Divergent Microfactories is trying to do the same in the automotive industry. To that end, the company debuted a 3D printed supercar dubbed "Blade", reportedly the first such vehicle to ever be additively manufactured.

The Blade's chassis is quite unique. Instead of having to generate the entire thing as a single unit, Divergent developed an 3D printed aluminum "Node" joint. The printed carbon fiber tubes that make up the chassis plug into these nodes to form a strong and lightweight frame for the rest of the vehicle. Divergent claims that this method can reduce the weight of the chassis by as much as 90 percent compared to conventional cars though the fact that it's carbon fiber and not steel or aluminum probably has a lot to do with those weight savings. In all, the vehicle weighs just 1,400 pounds (just a touch more than the Caterham Seven 620 R) but features a 700HP engine capable of running on both CNG and gas.

The company plans to produce a limited number of these vehicles to start (surprised Jay Leno doesn't already own one) but hopes to franchise its technology and let smaller boutique manufacturers build their own cars. And seriously, if the Department of Energy can build its own e-Cobra, how tough could it really be?

In this article: 3dprinting, automobiles, automotive, blade, cars, divergentmicrofactories, supercars, transportation
All products recommended by Engadget are selected by our editorial team, independent of our parent company. Some of our stories include affiliate links. If you buy something through one of these links, we may earn an affiliate commission.