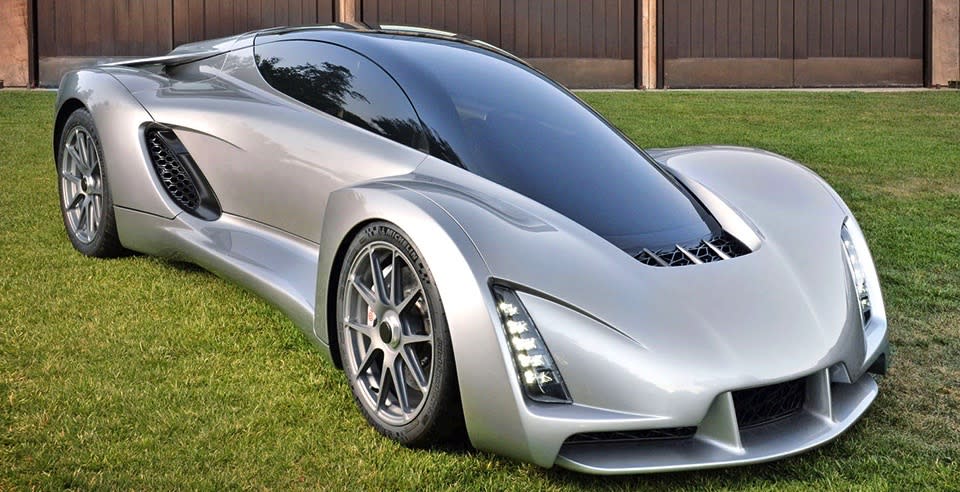 A working hoverboard has been the elusive dream of Back to the Future fans and transportation nerds for decades. Now, Lexus claims that it has built a prototype. The company's SLIDE hoverboard uses magnetic levitation technology, similar to high-speed bullet trains, and it is cooled by liquid nitrogen. In other transportation news, the US Department of Defense is working with Malloy Aeronautics to develop a hoverbike for the Army. Getting stuck behind a big truck isn't just annoying -- it can be very dangerous. So tech giant Samsung has designed "see-through" trucks with rear-mounted video panels that display the road ahead.

Elon Musk's high-speed Hyperloop could completely revolutionize transportation, but what will it be like to actually ride in it? Argo Design recently released detailed renderings showing its vision for a Hyperloop pod. Tesla's electric vehicles are obviously better for the environment than traditional internal-combustion cars, but how do they actually perform? A new video shows the Tesla Model S P85D squaring off against some of the world's fastest drag racers, and it more than holds its own. Tesla also celebrated the fact that Model S drivers racked up 1 billion all-electric miles, which translates to 570,000 tons of CO2 saved. Fans of classic sports cars can now go electric, too: British car company Morgan just announced plans to produce an all-electric version of its classic, sporty 3-Wheeler. And startup Divergent Microfactories unveiled the world's first 3D-printed supercar.

Evaporation moves vast quantities of water through the air every day. But could that process be harnessed to produce renewable energy? Researchers at Columbia University believe it can, and they've created two devices that generate renewable energy from evaporation. In other clean energy news, the Indian government recently announced plans to boost the country's solar production from 4.5 gigawatts to 100 gigawatts by 2022. Tesla's Powerwall home battery could be a game changer that disrupts the existing energy grid. Last week, Inhabitat rounded up the many ways the Powerwall will change the energy landscape. C.F. Møller Architects just unveiled plans to build a massive 25,000-square-meter school in Copenhagen that will be entirely solar-powered. As attached as we've all become to our smartphones, they all need a recharge sooner or later. Soofa, a woman-owned company, is currently in talks with the city of New York to launch a line of innovative solar-powered benches that double as charging stations.

Bionic hand technology has taken some major steps forward in recent years. A 26-year-old woman from London recently received the world's most advanced bionic hand, which can make precise movements and is anatomically accurate. In other tech news, the Japanese company Aldebaran has created a robot named Pepper that's designed to understand your feelings. The robot sold out online in less than 60 seconds. London's Design Museum has selected an unusual new technology as the winner of its Design of the Year contest: microchips covered in human cells that are designed to imitate the complexity of human organ tissue. The designers hope the microchips will eventually replace animals for drug and cosmetic testing. Rhinos are critically endangered, largely because of horn poaching. In hopes of curbing poaching, a San Francisco-based biotech company is planning to flood the market with 3D-printed synthetic rhino horns that are genetically identical to the real thing. Lego recently announced plans to invest $150 million to develop sustainable manufacturing materials that could one day replace the plastic used in Lego bricks. The bindi is a common ornamental mark that Indian women wear on their foreheads, and now one NGO is producing bindis that deliver essential nutrients directly to the skin. And in other wearable tech news, researchers in Australia have created a new type of stretchy sensor that could be worn on clothing or even skin to alert people about exposure to toxic gases.

In this article: 3d printing, EcoFriendly, green, inhabitat, InhabitatsWeekInGreen, Lego, powerwall, solar, Tesla, WeekInGreen
All products recommended by Engadget are selected by our editorial team, independent of our parent company. Some of our stories include affiliate links. If you buy something through one of these links, we may earn an affiliate commission.