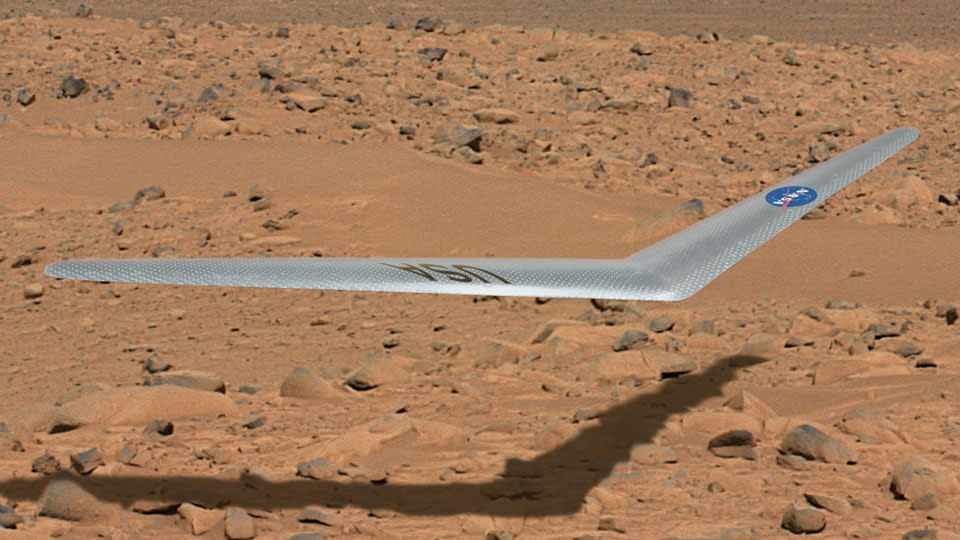 No, you're not looking at a very sophisticated boomerang -- that may be the first aircraft to fly the Martian skies. NASA has revealed that it's building a prototype for Prandtl-m (Preliminary Research Aerodynamic Design to Land on Mars), a glider drone that would launch from a descending rover and survey landing sites for the eventual manned mission. The two-foot-long vehicle will weigh about 2.6 pounds on Earth, but Mars' gravity will reduce that to 1 pound -- light enough that the craft could travel up to 20 miles after starting at 2,000 feet above the surface.

The rover won't launch until sometime between 2022 and 2024, but you won't have to wait so long to see the prototype in action. When the prototype is ready later this year, it'll take off from a balloon carrying either the surveyor camera or equipment to study high-altitude radiation. A second flight in 2016 will see Prandtl-m fly for as long as five hours until it lands on Earth, and a potential third flight would simulate the final drone's planned launch from a CubeSat. While it'll likely take much, much longer before humans are soaring over the Red Planet, this should represent an important first step.

In this article: aircraft, airplane, drone, mars, marsplane, nasa, prandtl-m, science, space, transportation, uav
All products recommended by Engadget are selected by our editorial team, independent of our parent company. Some of our stories include affiliate links. If you buy something through one of these links, we may earn an affiliate commission.