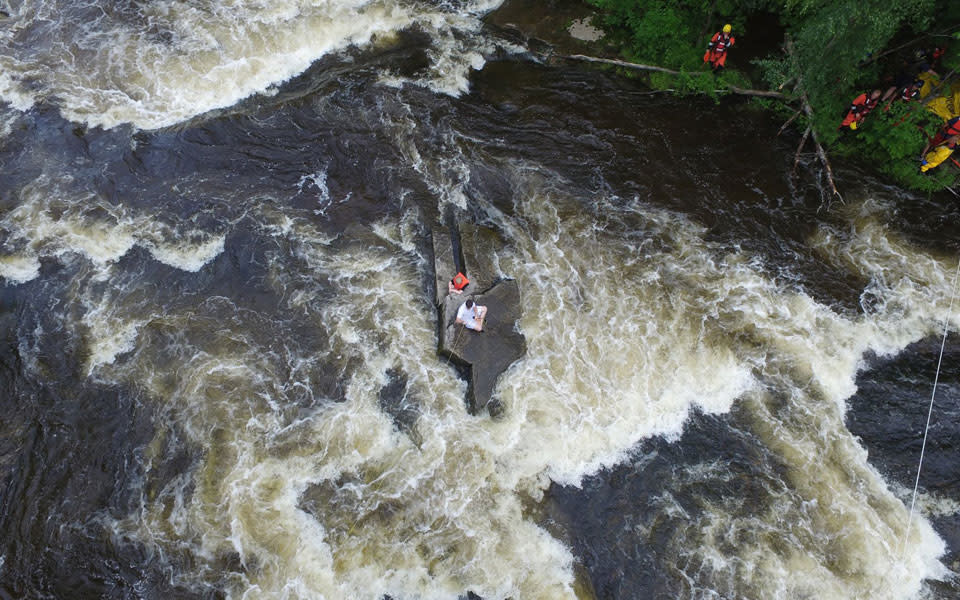 Drones aren't just useful as scouts and signalers during rescue operations -- they can play a hand in the actual rescue, too. When the Auburn Fire Department went to help recover two young men stranded in the middle of rapids in Mechanics Falls, Maine, Fire Chief Frank Roma used a DJI Phantom 3 to deliver a tag line that carried a much-needed life jacket. It also doubled as an observer while emergency crews sent an inflatable boat to bring the men back to shore, as you can see in the video below. While Roma notes that the Phantom 3 was his personal machine rather than official equipment, he's eager to see drones used more often in the field. This only "scratch[es] the surface," he tells TV network WMTW. It'll be a while before robots are carrying you out of danger, unfortunately, but that key role in a river rescue offers a glimpse of what's possible.

The AFD responded to assist Mechanic Falls with a swift water rescue. Also on location was the Poland FD, Oxford FD, Maine Game Wardens, Mechanic Falls PD and Androscoggin County Sheriffs Dept. Two young people had become trapped on a rock in the middle the river while trying to tube in the high water. One had a life jacket, the other did not. As rescue lines were set up down stream and a haul system was configured to allow for an inflatable rescue boat to be placed into the water to effect rescue of the two trapped young men, the AFD utilized a drone to fly out a tag line to the young man with no life jacket. He was instructed in how to untie the line from the drone and then pull a life jacket to him. You can see him doing so in this video. This technical rescue went very well and is an excellent example of inter agency cooperation and the benefits of training for these demanding events.

In this article: drone, gear, rafting, rescue, robot, robots, searchandrescue, TL18HELP, video
All products recommended by Engadget are selected by our editorial team, independent of our parent company. Some of our stories include affiliate links. If you buy something through one of these links, we may earn an affiliate commission.