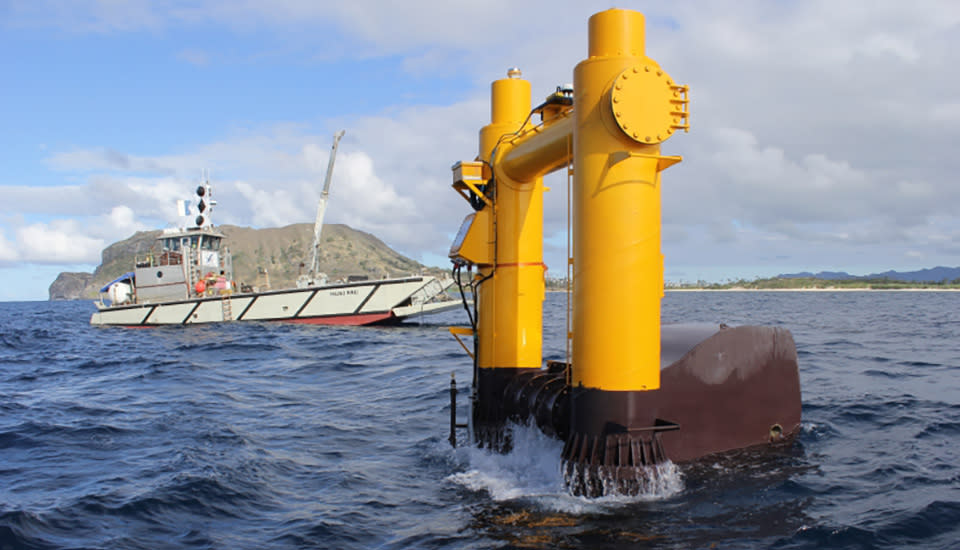 A prototype wave generator called Azura is supplying grid power to Hawaii, the first time such a feat has been officially verified, according to the US Department of Energy (DoE). Though it can only produce 20 kilowatts, the DoE said that similar devices could eventually provide large amounts of clean power to coastal cities. The project is co-sponsored by the US Navy and was developed by an Oregon-based company called Northwest Energy Innovations (NWEI). It's located at the Navy's Wave Energy Test Site in Kaneohe Bay in Oahu, at a depth of about 30 meters (100 feet).

The prototype consists of a 45-ton wave energy converter that can capture energy from both the heave (up/down) and surge (front/back) motions of waves. It has an onboard generator to convert kinetic motion to electricity, which is transferred to the grid via an undersea cable. The device first went online last month, bringing an unknown quantity of power to Hawaii's electrical grid. Researchers from the University of Hawaii recently confirmed its performance, marking the first time that US cities and homes have officially been powered, in part, by waves.

Following further tests on the current system, the NWEI and DoE plan to ramp things up considerably. They'll use the result from the current trial to design a new generator that will operate in bigger waves at 60-80 meter depths (100-150 feet) and generate up to 1 megawatt, enough energy to power several hundred homes. That system could come online as early as 2017, but meanwhile, researchers will continue testing Azura over the next year.

In this article: Azura, Department of Energy, DoE, green energy, grid-connected, Hawaii, Northwest Energy Innovations, timeline16gonegreen, US Navy, video, Wave power
All products recommended by Engadget are selected by our editorial team, independent of our parent company. Some of our stories include affiliate links. If you buy something through one of these links, we may earn an affiliate commission.