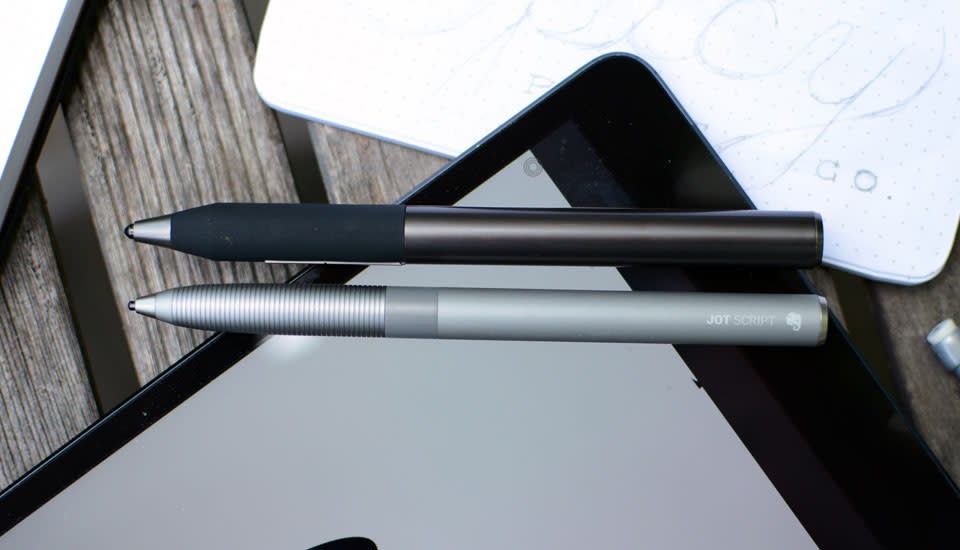 I've never been a big fan of the stylus. Sure, I don't really have a choice when I'm using Wacom's Cintiq pen displays, but other than that, I don't care much for styli. Adonit has a pair of them -- the Jot Touch and Jot Script 2 -- and they promise a more pen-like feel, so now seemed like as good a time as any to give the stylus another shot. Alas, though, after spending a few weeks getting to know these two gadgets, I can confidently say that I'm not ready to give up the ol' pen and paper just yet. Getting either of the two styli up and running is a breeze. For some apps, like Noteshelf, you fire up the mobile software to pair the accessory with your tablet (in my case, an iPad Mini). From the settings menu, you simply choose your brand of stylus from the list, whether or not you want palm rejection enabled and your writing style. That's not always the method for pairing, though. For software like Evernote's Penultimate, you tap the stylus menu and press and hold the gadget on screen for a few seconds to pair it. It's similar to what I saw on Adobe's Ink and Slide apps, and indeed, it shaves a few seconds off of the setup process. When it comes time to charge either the Jot Touch or Jot Script 2, they both come with a small USB dock. That diminutive charging station has a magnetic base, so when you get the stylus close, it locks into place. The Jot Touch and Jot Script 2 are easy to tell apart. The Jot Touch is black with a rubber grip and two shortcut buttons. It's also the bigger of the two, feeling a bit more like a Sharpie in the hand than a pen, and the tip is a bit wider, too. As for the Jot Script 2, its silver metal frame looks and feels more sophisticated, and the thinner body feels more like a real pen. It's still a little larger than your traditional ballpoint -- think of something along the lines of a fine-point Sharpie. In fact, that's how I would describe the pen tip as well. Due to the smaller overall size and fine point, I found myself gravitating toward the Jot Script 2 most of the time -- even if it meant giving up those built-in shortcut buttons. It just felt more comfortable. However, it really just depends on how you intend to use your stylus.

Let me explain what I mean. If you're more of the note-taking type rather than an artist or illustrator, the Jot Script 2 is probably the choice for you. It's meant for scribbling notes and marking up documents on a tablet -- simple and straightforward. Don't confuse that with boring, though; as I've said, it both looks and feels better in the hand. Just because it doesn't pack in a ton of bells and whistles doesn't mean this device is lacking. For example, my wife used the Jot Script 2 at work for a few days and she found it useful for adding notes to PDFs or pointing out key items on construction plans a contractor might overlook. If you're using a stylus for drawing or sketching, or if you plan on using design-focused apps, you'll likely want to consider the Jot Touch. Those shortcut buttons come in handy for erasing and undoing, and the pen works well with Adobe's Illustrator Line and Photoshop Sketch. It also packs in 2,048 levels of pressure sensitivity (similar to Wacom's offering), so when it comes to detail work with brushes, you'll be able to handle that as well. Personally, I'd rather sketch on paper, and during my testing I primarily used a stylus for note taking; hence my preference for the Jot Touch.

The key reason I never cared much for a stylus was the stubby rubber tips. They worked, but most of the time, they didn't glide across an iPad screen with ease. And when the time came to do some work with fine lines, the nib was thicker than the line on the screen. Far from an ideal situation. Adonit's Jot Touch and Jot Script 2 employ a more pen-like plastic tip capable of finer lines and more control. It's a slick plastic, though, so you don't get the resistance of a pen on paper, but the line quality is much more in keeping with the real thing. Yes, the resistance issue is a combination of the stylus tip and the glossy iPad screen, but if there were an option for using them with a matte display, they'd probably get higher marks from me. I like that feel of pen on paper, and while the difference may be subtle, it's important to me. Call me a Luddite, but it's probably more a product of my art school education than anything else. Carrying around a small sketchbook to jot down notes, create lists and catalog my doodles is a habit formed long ago. More importantly, it allows me to not look at a screen for a few minutes.

The Jot Script 2 is the least expensive of the two, priced at $75. It also comes with six months of Evernote Premium, so if you've been eyeing that and haven't yet splurged, the add-on might be the extra nudge you needed. In fact, the model I tested was optimized for Evernote's Penultimate. The Jot Touch costs $100 due to its added controls and pressure sensitivity. Perhaps the best part about either of these is that they work with a variety of apps, so you're not locked into a limited selection due to compatibility. Don't like Adobe's drawing apps? Try Forge. Not a big fan of Penultimate? Give Noteshelf a shot. Offering a number of options means you can test-drive a few and find which works best for you. At the end of the day, Adonit has made one of the most compelling cases I've seen for going paperless with the Jot Script 2 and Jot Touch. I'm just not ready to take the leap.

In this article: accessories, art, irl, jot, jotscript, jottouch, jottouch2, notes, styli, stylus
All products recommended by Engadget are selected by our editorial team, independent of our parent company. Some of our stories include affiliate links. If you buy something through one of these links, we may earn an affiliate commission.