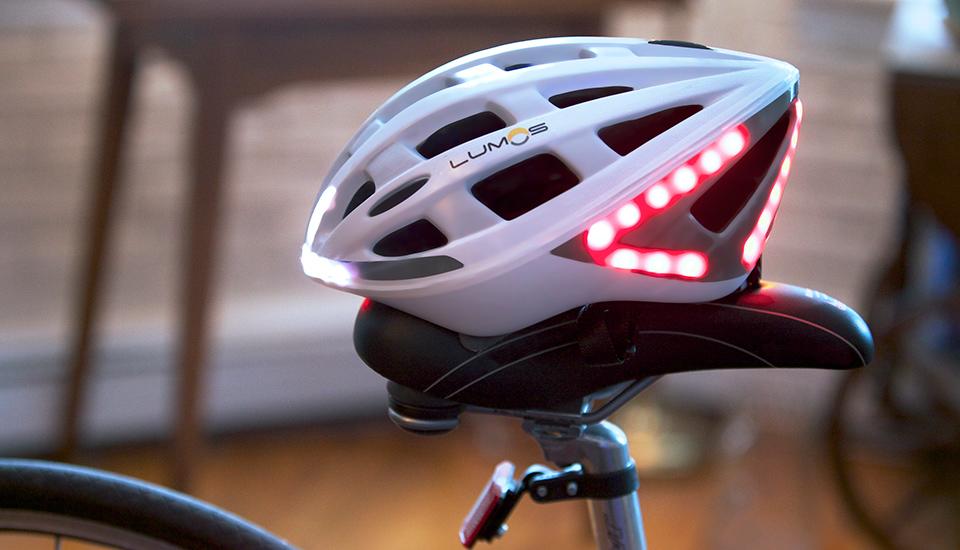 For cyclists, the road can be a nasty place to be at night, so we're all for technologies that can help draw drivers' attention in order to reduce the number of accidents. The latest of such attempt is the Lumos helmet, which not only comes with turn signal indicators that can be controlled wirelessly, but also packs a brake light that comes on automatically as you slow down. This seemingly simple idea came from Eu-wen Ding (who looks like an Asian clone of Miles Teller) and Jeff Chen. The two first bonded at the HackMIT 2013 weekend hackathon and have since been working on this project with a helmet manufacturer for 10 months. Ding pointed out that while there are already light attachments available for bicycles, cyclists may still unwittingly leave them behind; but most cyclists wouldn't ride without their helmets, hence the Lumos. And it's obviously not a case of just slapping lights onto a helmet, because those already exist. Instead, the Lumos comes with a dual-button handlebar attachment that lets you toggle either the left or right turn indicator via RF signal; and when you decelerate, the brake light on the back of the helmet automatically lights up, though Ding and Chen are still fine-tuning this part. There's also a set of LEDs on the front side that stays on permanently, so there's little excuse to miss the cyclist at night. According to the product page, a single charge should last up to a week on average use (30 minutes per day); and recharging is simply a matter of plugging in a micro-USB cable.

Even though the Lumos is launching with two sizes on Kickstarter today, it won't come cheap, but there's a good reason for this: it's still a proper cycling helmet that's passed impact tests and meets safety standards -- CPSC in the United States (CPSC 16 CFR Part 1203) and EN1078 in Europe. With the super early bird offer you can nab one for $85 and expect an April 2016 delivery, followed by the $99 batch in May and the $119 batch (or the $190-for-two deal) from June onwards.

In this article: biking, brakelight, cycling, helmet, hongkong, kickstarter, lumos, safety, sports, video
All products recommended by Engadget are selected by our editorial team, independent of our parent company. Some of our stories include affiliate links. If you buy something through one of these links, we may earn an affiliate commission.