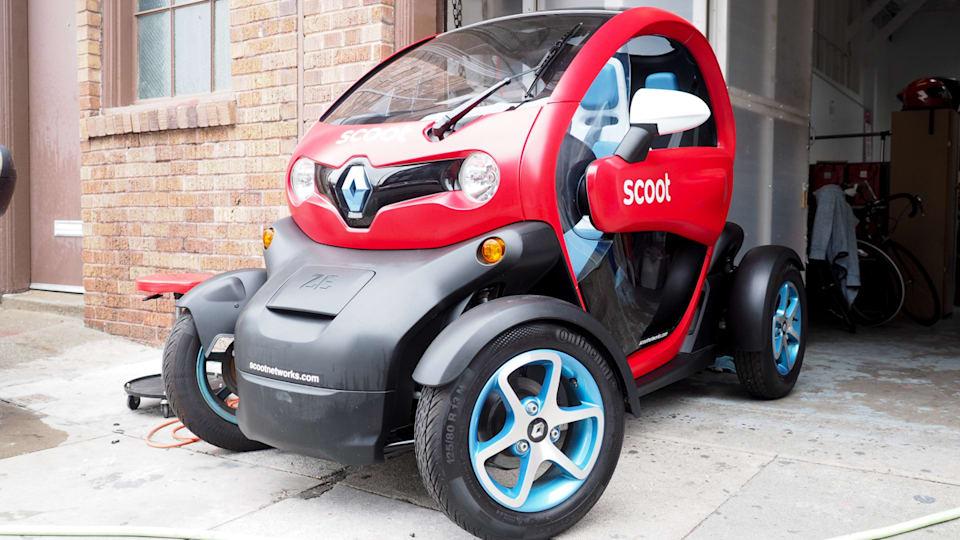 If you live in San Francisco you've seen them. The red Scoot scooters buzz pass vehicles trapped in San Francisco's increasingly frustrating traffic. The riders' helmets sport a lightning bolt while the signage on the vehicles touts a cheap alternative to Uber, Lyft and other car-sharing services as a way to get around town. Those tiny rolling billboards are working. Scooter-rental service Scoot is currently adding an additional 150 scooters to its current fleet of 250. The new Scoot Cargos are larger and less about commuting and more about running errands. It's a logical expansion for the company. But its future might lie beyond two wheels.

Scoot has been showing off its latest experiment, an electric Renault Twizy, at company events. The 17-horsepower, two-person vehicle puts the passenger directly behind the driver and has a small trunk. While it's not available for purchase in the United States, one sits outside the company's headquarters in San Francisco. It's a huge jump from two wheels (specifically it's four wheels). But in the rapidly changing world of urban transportation and the growth of electric vehicles, it's something a company like Scoot should be investigating.

It won't say much more than it's testing out the Twizy. The company's VP of Fleet, Mike Waltman told Engadget, "We're constantly thinking about what would make the service more valuable for our riders." But it's a safe bet that if and when the Scoot car hits the road, it will work like the current Scoot fleet. The company is far from the first to offer a car-rental service that's based on quick trips rather than a full-day reservation. In cities like Austin, Car2Go offers a similar service that charges per mile in addition to per hour. But Scoot's been working its way toward this inevitability for over two years.

Scoot launched its rental service in September 2012. After signing up, an instructor gives new customers a 30-minute introduction to the scooters and how the service works and the riders are off. Customers rent a scooter for a few bucks to get them across town -- no motorcycle license needed. Previously, the bikes were only available at charging stations. But, a recent update added street parking in busy neighborhoods to the mix. Now the bright red scooters are more visible (not to mention easier to pick up and drop off) than ever. Currently, Scoot is only available in San Francisco. And while it's actively investigating other cities, it's picked a city that's ready to embrace a two-wheeled lifestyle. Between 2010 and 2014, according to DMV estimates, motorcycle registrations in San Francisco have increased 10.3 percent while car registrations have only increased 5.5 percent. Scoot just made it easier to join the folks getting from point A to point B quicker without having to actually buy or service a vehicle. An electric rental car could do well. With 400 vehicles available on the streets in the next few weeks, Scoot seems to be resonating with the populace and it's continually experimenting to see what those customers might want next. The company is already evaluating renting an electric "Super Scoot" motorcycle on a limited basis while it figures out if cars are a good fit. "Scoot is designed as a platform for light electric vehicle rental. Scooters are where we are now, but we expect that in the future there will be a broader offering set and the Super Scoot is one good example of things we're testing in that direction," said Waltman.

Scooters are fine in cities with mild year-round weather like San Francisco, Portland and San Diego, but to succeed in a city like New York where there are actual seasons, you need a car. Scoot's testing the car; now it just needs to test the cities.

In this article: ElectricVehicle, EV, RenaultTwizy, Scoot, ScootCargo, Scooter, SuperScoot
All products recommended by Engadget are selected by our editorial team, independent of our parent company. Some of our stories include affiliate links. If you buy something through one of these links, we may earn an affiliate commission.