Chevrolet's Menlo EV is a Bolt-based crossover bound for China 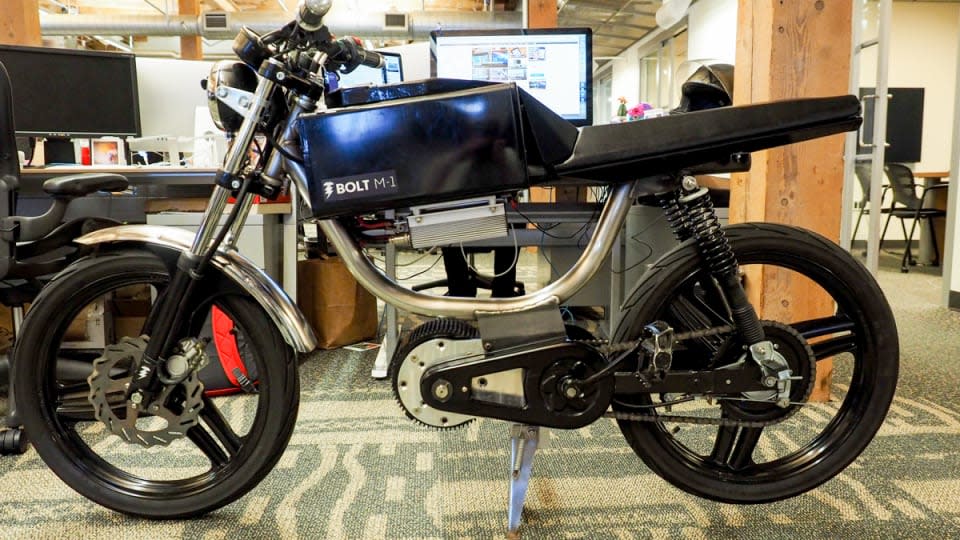 The Bolt looks sort of like a motorcycle, but it's really more like a BMX bike with an electric motor bolted to it. The startup's electric bike doesn't try to compete with motorcycle maker Zero or scooter manufacturer Gogoro; instead it's targeting the bicycle commuter that wants a smoother ride to work. While it also looks like a cross between a moped and cafe racer, it's technically a bicycle with an electric motor and can technically be ridden in the bicycle lane. Angry cyclists aside, that also means you don't need a license to ride it or a have to get it registered or insured. For urban environmentalists tired of showing up to work all sweaty, it could be the ultimate commuter. The Bolt M-1 is fun to ride. You just get on, twist the throttle and you're off. Not off like a shot. It's not a motorcycle -- far from it -- but its electric engine is zippy enough to pleasantly surprise you the first time you open the throttle. The 140-pound frame and pedals remind you that you're on something closer to a bicycle than a motorcycle. But it's heavy enough that those pedals should only be used on flat surfaces or while pointed downhill. Or better yet, not at all. You can ride the M-1 like a bike, but it's not ideal.

Even though I was riding a pre-production version of the bike (code-named: Raven), it's sturdy enough to be jumped over speed bumps (something co-founder Nathan Jauvtis was happy to demonstrate during my initial test ride with him) and has a sufficiently sporty look so that it doesn't seem like a standard moped. It's cool looking enough to get the attention of the Engadget staff when I rolled it into the office. Did I mention it's technically a bike? It has the expected technical touches you would expect from a Silicon Valley startup. It uses a passcode instead of a key and has a USB charger for your smartphone and a companion app that connects via Bluetooth. Two quick-release batteries sit at the top of the frame like a motorcycle gas tank. The batteries can be removed and charged in your home or at work. Jauvtis noted that not everyone has a garage to charge their vehicle. This way you can lock up the M-1 and charge its batteries without connecting the bike to a wall.

The bike has two settings: Eco mode with a top speed of 20MPH pushing 1,000 watts with a 50-mile range and Sport mode with a top speed of 40MPH with a 30-mile range pushing 5,500 watts. While you would be tempted to buzz around town in Sport mode, legally you shouldn't. Bolt notes that it's for "off-road use only." That's because once the bike is out of Eco mode, it's technically not an electric bike anymore and is subject to registration and the rider needs a license. So owners should never ride on the streets in Sport mode (wink wink). Of course if you do, and you're a fan of obeying the letter of the law, Bolt will help you register the vehicle as a "special construction" (like a custom motorcycle) with the DMV.

That is, when the bike is available to the general public. Bolt is currently accepting $500 deposits to be part of the initial production of the bike. The deposit will secure potential buyers a spot in the crowdfunding campaign it will launch in September. The first bikes will cost $4,995 with normal pricing landing somewhere between $5,500 and $6,000. It's not cheap. The first generation of any product rarely is.

In the meantime, the Bolt team is hand building 10 bikes for beta testers out of a garage and a living room in San Francisco's Richmond district. Jauvtis is excited. The Bolt M-1 offers scooter and moped convenience without the licensing and registration barriers associated with those vehicles. The bonus is that it's fun to ride and easy on the eyes.

In this article: Bolt, BoltMotorbike, Commuting, e-bike, ElectricBike, video
All products recommended by Engadget are selected by our editorial team, independent of our parent company. Some of our stories include affiliate links. If you buy something through one of these links, we may earn an affiliate commission.