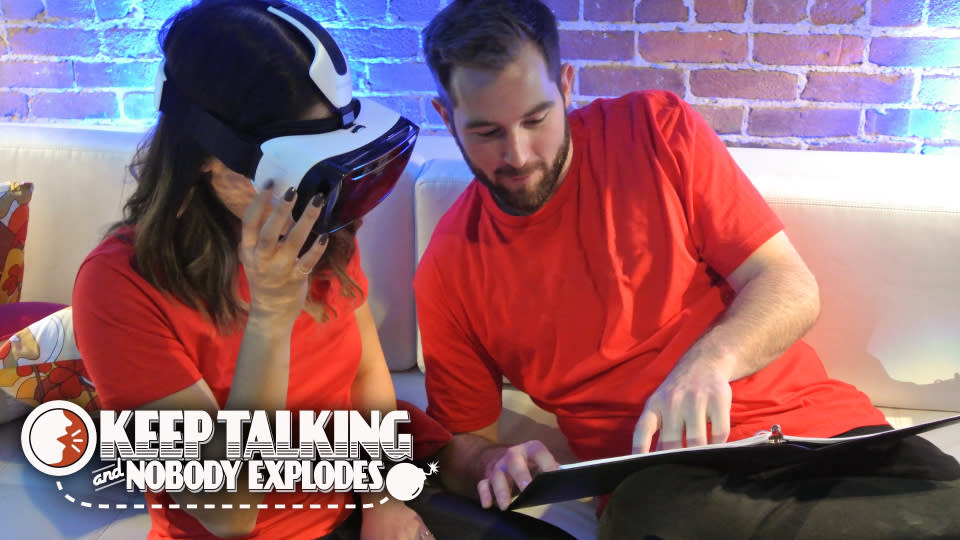 Keep Talking and Nobody Explodes. It sounds like a threat, but it's really the title of (and the instructions for) one of the best dang cooperative video games I've ever played. It's a virtual reality thriller: two players must work together to defuse a bomb--one wears a VR headset and handles the explosive, the other rifles through a convoluted manual in search of defusal instructions. Neither player can see what the other sees. It's intense, hilarious and completely unique in every way--and now it's available for Gear VR. The game hits the Gear VR store today for $9.99, but folks who wandered the GDC 2015 showfloor back in March might have seen it at Alt.Ctrl.GDC's alternative gaming arcade -- a unique showcase of games that defy traditional controller and gameplay conventions. Keep Talking and Nobody Explodes embodies the spirit the gallery perfectly: not only does it simulate the absurdity of the b-movie over-the-phone bomb disarming scene (cut the red wire! No! The green wire!), but it also redefines cooperative gameplay and leverages the inherent isolation of virtual reality gaming to create a new type of video game.

Now you can plan it at home -- and if you have a Gear VR and a friend (you don't need a gamepad, while it will work with one, it's been adjusted to use the Gear VR's built-in touchpad too), you really should. Check out the game's official launch announcement at the source link below.

In this article: gaming, gearvr, keeptalkingandnobodyexplodes, samsung, videogames, virtual reality, virtualreality, vr
All products recommended by Engadget are selected by our editorial team, independent of our parent company. Some of our stories include affiliate links. If you buy something through one of these links, we may earn an affiliate commission.