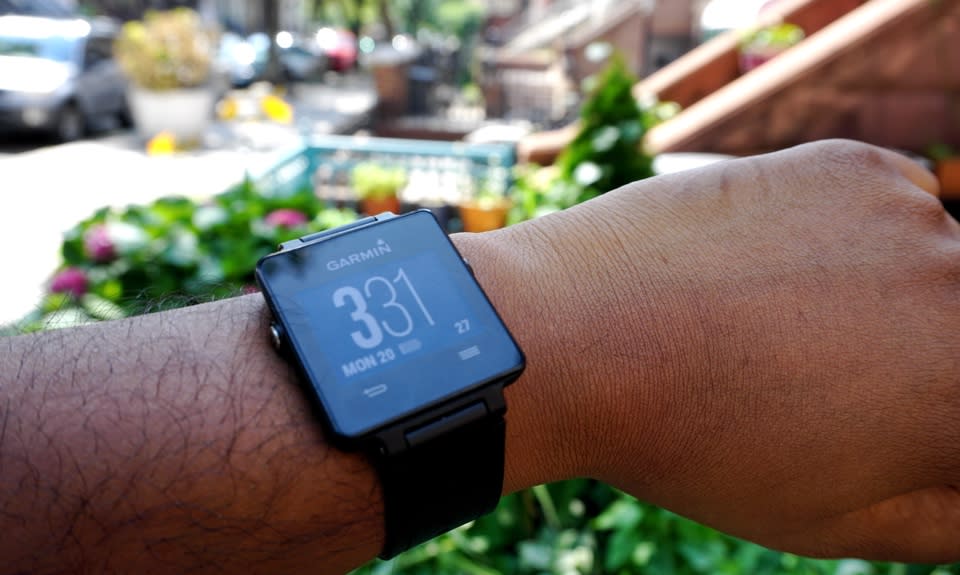 There may never be a wearable equivalent of the iPhone -- a must-have gadget that sparks a fundamental change in how we live. Instead, the future of wearables is all about niche products that may be right for some, but won't necessarily be everyone's cup of tea. That's my main takeaway after spending a few weeks with Garmin's Vivoactive ($250), which is yet another one of its wearable gadgets for people who make working out a way of life. Honestly, though, it's a thought I've had percolating for a while now, especially after Jawbone's disappointing Up3. The Vivoactive isn't a great smartwatch or activity tracker for most people, but for someone who demands a GPS-enabled wearable for tracking their runs, swims and just about anything involving movement, it might be ideal. Garmin's never been known for its design chops, and that's clearly apparent with the Vivoactive. It's a fairly nondescript black slab of plastic and glass that, from afar, might look like an old digital timepiece. Up close, you can see it's a bit more intriguing: There's a low-resolution color touchscreen LCD with an interface that resembles Pebble's watches, as well as a relatively thin profile (it's even thinner than the bulbous Apple Watch). The Vivoactive's watchband isn't anything fancy, but it's relatively comfortable for prolonged wear. Overall, it's not the sort of thing that screams for attention. That's a good thing, since it's a tad too dorky for when you want to dress up. After testing out the Apple Watch and several Android Wear devices, it took a while to get used to the Vivoactive's sluggish and archaic interface. Tapping the home button on the right side of the watch opens the main menu of activities to track, which includes running, biking, swimming, golfing and walking by default. You navigate through the Vivoactive's screens by swiping right on the display, and there are "Back" and "Menu" buttons (a la Android) on the bottom. It's a functional interface, but really nothing more than that. It takes a bit of time for your swipes to register, and I often had to tap the watch repeatedly to activate the bottom buttons. The Vivoactive ended up crashing multiple times after I apparently overloaded it with swipes and button presses.

Oh, and that button on the left? It manually turns on the Vivoactive's LED backlight -- no different than your cheapo Timex of yesteryear. Talk about taking a step back in time.

So why get the Vivoactive when just about everything tracks your steps these days? Like all of Garmin's wearables, it's meant more for keeping tabs on specific workouts. Since it's GPS-equipped, it can accurately track how far you go, as well as plot your excursions on a map. It's also waterproof up to 50 meters, so you won't have to worry about it when going for a swim. You can get it bundled with one of Garmin's heart rate monitor chest straps for around $300, or just use a chest monitor that you already own. There's no built-in heart rate monitoring like the Apple Watch or Fitbit's recent entries, but then again, fitness junkies typically prefer chest straps, which are more accurate than wrist-based monitors. It also offers far better battery life than more advanced smartwatches, lasting around a week for typical usage.

While the Vivoactive wasn't anything special for typical smartwatch use -- it also pipes in phone notifications, including call and text details -- it was ideal for tracking my runs around the neighborhood. Being able to hit a physical button to start and stop your laps is far more useful than stopping what you're doing and swiping a touchscreen on Android Wear watches or the Apple Watch. But since I can only fit in two or three runs a week, the Vivoactive ended up feeling like a step backward for me most of the time. I longed for the plethora of apps on other platforms (Garmin has a handful available through its Connect app), and the larger, more colorful touchscreen interface on modern smartwatches. If I were the sort of person who had time to work out every day, or at least more than three times a week, the Vivoactive might make more sense. But even then, it's not the sort of thing that I'd recommend wearing outside of workout sessions. Most smartphones do a decent job of basic step tracking, and fitness bands from Fitbit and Jawbone do a much better job of sleep tracking. It's really only worth shelling out for the Vivoactive if you're actually going to use its advanced tracking features regularly.

It's also a shame that Garmin's software offerings are still far weaker than what Apple, Fitbit and Jawbone are offering. The company's "Connect" app syncs with the Vivoactive and displays all of your fitness data (no surprises there), but it's not as well-designed as other apps. There's plenty of detail for all of the activities you log, at least -- my runs included data about the elevation I climbed and my cadence. You can also get to Garmin's "Connect IQ" store from the app to get more software for the Vivoactive, but honestly there's not much there that's compelling. None of this is to say that the Vivoactive is a bad device; it's just one meant for a certain type of very active consumer. Given the company's history of wearables so far, that shouldn't be too surprising, but with its lower price, I hoped it would also be a decent option for mainstream users. That sadly isn't the case here.

In this article: engadgetirl, Garmin, GPS, irl, mobilepostcross, smartwatches, VivoActive
All products recommended by Engadget are selected by our editorial team, independent of our parent company. Some of our stories include affiliate links. If you buy something through one of these links, we may earn an affiliate commission.