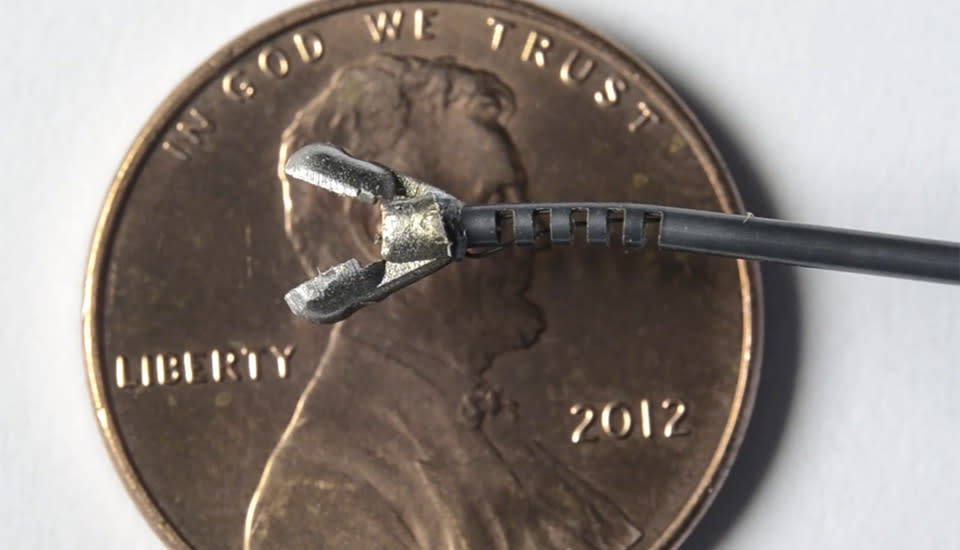 The coin above wasn't enlarged to make the pincer-like device look extremely small -- it's really that tiny. That "pincer" is a two-millimeter-thin instrument designed and built by a group of researchers from Vanderbilt University for incredibly precise minimally invasive surgery. It's pretty comparable to the da Vinci surgical robot, though that one has bigger needles and requires five to eight millimeter incisions. According to the Vanderbilt team's lead researcher, Robert Webster, the da Vinci works great for abdominal surgery, but it's not ideal for smaller parts of the body. Unfortunately, "the da Vinci uses a wire-and-pulley system that is extremely difficult to miniaturize any further," he said.

A perfectly straight probe has limited capabilities, though, so the team spent six years designing one that has a bendable tip that surgeons can steer. Since their attempts to put together several minuscule pieces ended in disappointment, the team decided to change tactics and cut slots out of the tip of a nickel titanium tube to make it flexible. Surgeons can then pull a wire that runs through the tube and is attached to the tip to bend the instrument up to 90 degrees.

The project's consultant, Professor S. Duke Herrell, believes that bendable wrist makes all the difference in the world:

Adding the wrists to the steerable needles greatly expands the system's usefulness. There are a myriad of potential applications in some really exciting areas such as endoscopic neurosurgery, operating within small lumens such as the ear, bronchus, urethra, etc. This would allow us to do surgeries that at present require much larger incisions and may even enable us to perform operations that are not feasible at present.

The researchers want to test their creation by using it for a transnasal procedure to remove tumors in the base of the skull and the pituitary gland. That process usually involves opening up the face, but by passing this instrument through the nasal cavity, the patient can recover more quickly and prevent scarring where it will be perfectly visible. Afterward, they aim to find a commercial partner that can help them pass through the FDA, perform clinical trials and get the device to the hands of capable surgeons.

In this article: davinci, medicine
All products recommended by Engadget are selected by our editorial team, independent of our parent company. Some of our stories include affiliate links. If you buy something through one of these links, we may earn an affiliate commission.