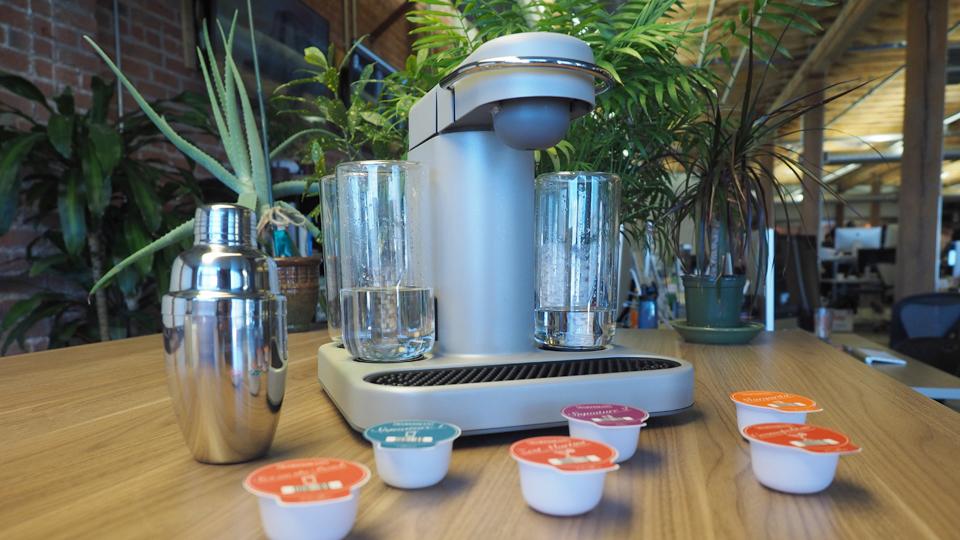 My desire for a mechanized mixologist is as strong as an overproof rum. Much to my chagrin, and despite a long history of inventors toiling to perfect the drink-mixing machine, the practice is still largely the domain of human beings. That said, two Kickstarter projects are offering a new, more consumer-focused take on the "robot bartender." Ladies and gentlemen, 2015 is the year of the "Keurig for cocktails." Like it or not, a pair of comparably practical, single-use kitchen appliances could crush my dreams of a humanoid mixologist. That is, if they can get it right. Just a few months after publishing a story about Somabar, a "robotic" bartender casually referred to as the "Keurig for craft cocktails," I came across Bartesian, a cocktail maker that bites off the K-Cup concept, albeit with a more democratic approach.

Functionality is the main differentiator here and potentially the key to one automated barman's success over another.

The prototype that Bartesian co-founder Bryan Fedorak showed me has the same general design concept as the Somabar. Both are flanked by refillable glass bottles (Somabar has six and Bartesian has four) containing key ingredients and both have a recessed front-and-center spout for dispensing liquids into the appropriate glassware. While they each have the unmistakable air of a kitchen gadget, Bartesian looks something like a KitchenAid mixer minus the paddle and bowl while Somabar has a more refined, cabinet-like appearance.

Functionality is the main differentiator here and potentially the key to one automated barman's success over another. Somabar is targeting craft cocktail enthusiasts and amateur bartenders -- people who, as I've pointed out, will likely be underwhelmed by its limited skillset. Meanwhile, Bartesian has its eye on a more casual consumer. As such, the process of procuring a drink is so easy you could teach a toddler to do it (you can thank me later for the awesome new party trick).


Where Somabar has an endless cocktail repertoire, a built-in social network for sharing recipes and a customizable smartphone app for remote control, Bartesian has a simple, three-button, step-by-step interface and is only capable of making six different drinks. Users choose from one of six capsules and insert them into the machine, which uses a barcode reader to add the corresponding liquor and water to dilute concentrated mixers. The machine then prompts you to select the appropriate glass and strength and boom! You've got a Cosmo.

Somabar relies on a well-stocked bar, requiring users to provide all of the ingredients for their drinks of choice. Bartesian only requires four basic liquors (gin, vodka, rum and tequila) and K-Cup-style capsules packed with concentrated mixers. Fedorak says they're experimenting with new recipes, but will launch with three classics (Cosmopolitan, Margarita and Sex on the Beach) and three originals (Uptown Rocks, Bartesian Breeze, Zest Martini). Somabar may have a more robust menu, but if you're looking to make the perfect martini, neither is going to deliver.

A drinksman needs a machine-made cocktail like a foodie needs a TV dinner.

Part of being a discerning drunk comes from the practice of painstakingly creating cocktails by hand. Somabar takes the shaker out of the hands of amateur bartenders, effectively eliminating the ritual and the sense of accomplishment of making the perfect drink. Bartesian, on the other hand, targets the type of weekend warrior who's more concerned with getting twisted and far less with how they get there. A drinksman needs a machine-made cocktail like a foodie needs a TV dinner.

That's not to say that Bartesian will be an overnight success. In our taste-test, the device malfunctioned, spraying the contents of the pods across our office bar. (Yeah, we have an office bar. You jelly?) According to Fedorak, those pods have been the most difficult part of the equation to nail down. It turns out, finding beverage-grade plastics that are flimsy enough to be punctured by the machine is no easy feat. And, while the company boasts all-natural ingredients in its repertoire of six different mixers (available for $20 for a pack of 12 capsules), existing brands like Stirrings already produce mixers that will get the job done without sending you into a diabetic coma.

Bartesian successfully funded its Kickstarter campaign with a final total of $115,846 earlier this month, but it still has a long way to go before it's consumer friendly. And even then it could be a hard sell. Ultimately, you're spending $299 to save yourself a shake or a stir. You have to ask yourself, how valuable is a flick of the wrist to you?
In this article: bartesian, cocktail, cocktails, drink, drinks, hands-on, k-cup, keurig, mixology, robot, robot bartender
All products recommended by Engadget are selected by our editorial team, independent of our parent company. Some of our stories include affiliate links. If you buy something through one of these links, we may earn an affiliate commission.