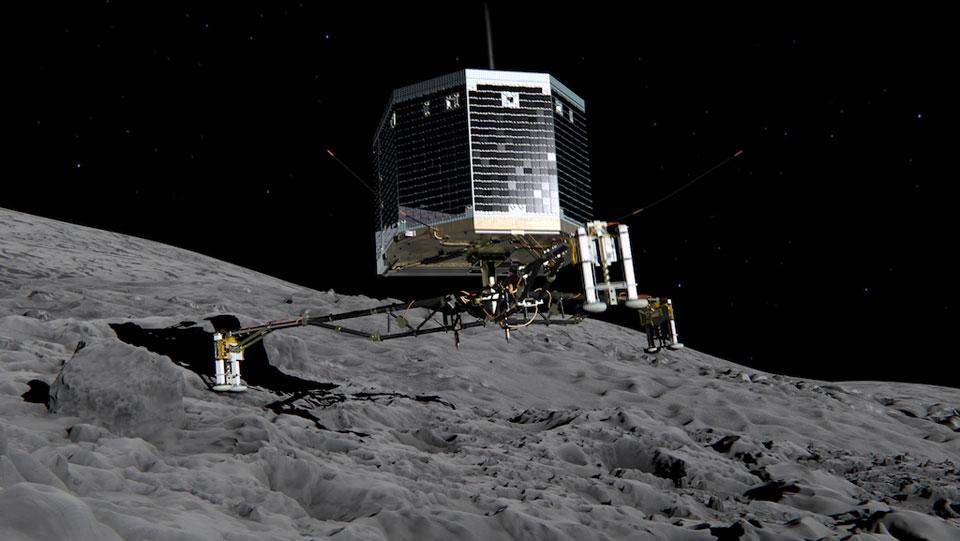 Philae had a bumpy landing on the 67P/Churyumov-Gerasimenko comet last November, but that didn't stop it from relaying some important data back to Earth. Papers published in the journal Science reveal how scientists, using the data collected by Philae's onboard instruments, have been able to identify the internal structure of the comet, its daily fluctuations in temperature and organic compounds that could help support life.

The MUPUS sensors which hammered into Abydos -- the name given to Philae's final resting place -- has revealed that the lander is sitting on a thin layer of dust less than 3cm thick and a compacted mixture of ice and dust below. The CONSERT radar, meanwhile -- which fired radio waves through the nucleus to Rosetta -- has given a detailed picture of the dust and ice located in the comet's center. Using MUPUS' thermal sensor, scientists have also discovered that the temperature on the comet shifts between -292 degrees Fahrenheit (-180 Celsius) and -229 degrees Fahrenheit (-145 Celsius) during the day.

These findings alone would be cause for celebration, but they're only the tip of what's been published in Science. Using Philae's ROLIS and CIVA camera systems, researchers have been taking a closer look at the surface of the comet. Before touching down at Agilkia -- the name given to the spacecraft's first and brief landing point -- ROLIS observed a vastly uneven surface comprised of meter-long boulders and dusty regolith measuring up to 2 meters deep. One of the largest shards is five meters high and has a tail of debris on one side, revealing how parts of the comet move while it's hurtling through space. A photo shot by CIVA of the Abydos landing site. Credit: ESA/Rosetta/Philae/CIVA

Philae was also able to collect gas and dust samples that kicked up during and after its double-bounce landing. The data collected by several onboard instruments have revealed 16 organic compounds -- four of which have never been detected on a comet before. The gases that entered the top-mounted tubes included components of coma gases and carbon-bearing organic compounds such as formaldehyde. These can contribute to the creation of amino acids, nucleobases and sugars, including ribose -- which can be found in DNA molecules. It's early days, but these findings do provide some clues as to how comets and the early Solar System could have transported crucial building blocks for life. Even if the Philae lander never wakes up again, scientists can probably call that a job well done.

In this article: comet, cometlanding, ESA, philae, space
All products recommended by Engadget are selected by our editorial team, independent of our parent company. Some of our stories include affiliate links. If you buy something through one of these links, we may earn an affiliate commission.