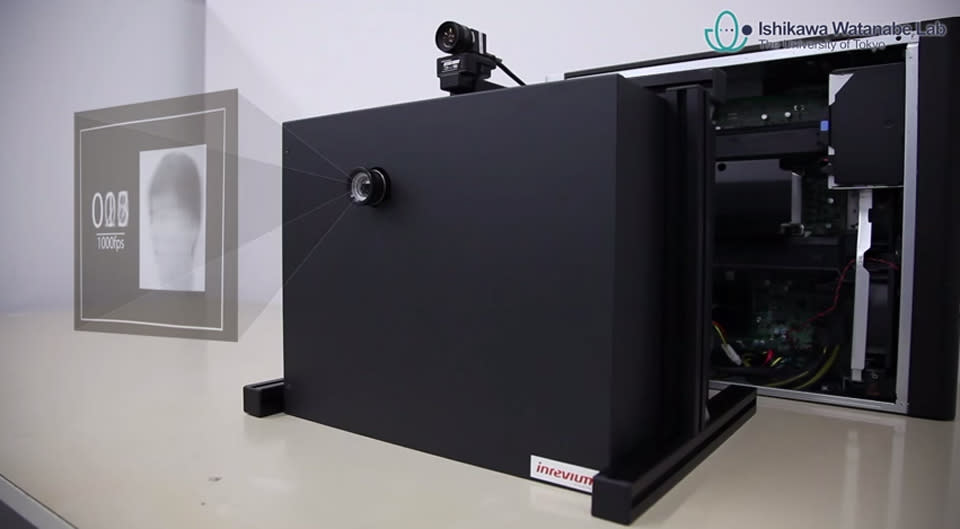 Projection mapping theoretically adds a Holodeck-like level of immersion to simulations, but current projectors are simply too slow to keep up with fast-moving people. That won't be an issue if University of Tokyo researchers have their way. They've developed DynaFlash, a 1,000 frames per second projector that can keep up with just about any moving object. It can't beam images into thin air, like you see above (that's just for show), but it can seemingly do everything else -- even if you shake or spin an object very quickly, you'll still get the image where you wanted it to be. The trick involves adding a special controller to a DLP (digital light processing) projector that, combined with fast image output, delivers both high frame rates and low latency.

The current projector is crude: it outputs at a mere 1,024 x 768 resolution in a 256-color scale, which pales in comparison to the visual quality you'll get from just about any conventional projector. The scientists expect to ship a real product as soon as summer 2016, though, and the possibilities extend beyond just extra-involving games. You could use it for highly detailed 3D measurements -- a parking lot could keep track of the exact positions of cars as they move around, for instance, letting you know which spaces are about to be filled. DynaFlash will need a higher resolution and a richer palette to be effective for much more, but that may only be a matter of time.

In this article: dlp, dynaflash, hdpostcross, ishikawawatanabelaboratory, projectionmapping, projector, science, UniversityOfTokyo, video
All products recommended by Engadget are selected by our editorial team, independent of our parent company. Some of our stories include affiliate links. If you buy something through one of these links, we may earn an affiliate commission.