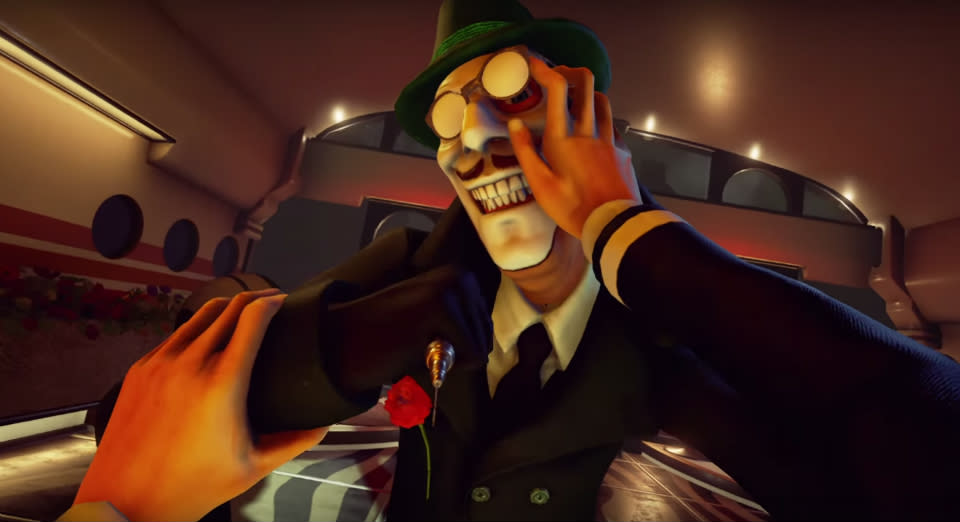 We Happy Few isn't necessarily a terrifying first-person stealth and combat game. So far, it's more of a bone-chilling, creepy, deeply unsettling experience. In other words: It looks great. Today, there's good news for anyone who pledged to the game's successful $330,000 Kickstarter, or anyone in the market for a drug-fueled romp through a fictional 1960s English town. We Happy Few will hit Steam Early Access and Xbox Game Preview at the same time this holiday season, Compulsion founder Guillaume Provost tells Engadget.

We Happy Few took center stage at Gamescom's Xbox conference, complete with a nursery-rhyme trailer and the Game Preview announcement. It was a slight surprise to see We Happy Few under the lime-green Xbox lights, since the game has been fairly platform-agnostic to this point. Compulsion's first game, Contrast, was a PlayStation 4 launch title, and development on We Happy Few originally targeted PC first, followed by Mac and Linux, and finally consoles.

"We hadn't really planned on associating directly with a first party this time around, but Microsoft was consistently very, very excited about the title and after discussing it internally we felt like we should simply embrace a partner who was clearly passionate about the game," Provost says. Now, Compulsion is prioritizing development on Xbox, Windows 10 and Steam, he says. The full game is due out in 2016.

We Happy Few is set in 1964 in the quaint English town of Wellington Wells, where every citizen is constantly doped up on pills that make them forget the horrifying things they had to do during the war. In a first-person view, players try to blend in with the suspicious, murderous townsfolk and attempt to escape Wellington Wells. We recently played an early version of We Happy Few and found it to be dreadfully delightful.

In this article: compulsion, gamescom-2015, gamescom2015, hdpostcross, STEAM, steamearlyaccess, WeHappyFew, xbox, XboxGamePreview
All products recommended by Engadget are selected by our editorial team, independent of our parent company. Some of our stories include affiliate links. If you buy something through one of these links, we may earn an affiliate commission.