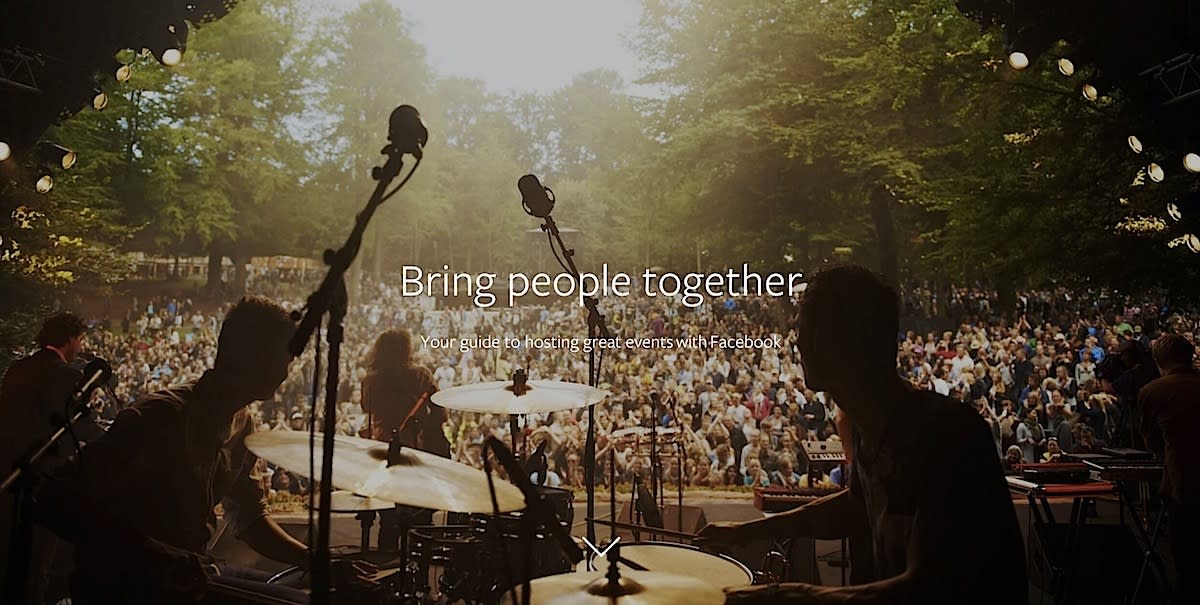 In the latest Facebook earnings call, CEO Mark Zuckerberg said that Facebook Events now has 450 million users, a big jump in numbers that he says is now of "global scale." Of course, any Facebook user can tell you that this momentum with Events has been building for a while now. After all, why use sites like Evite and Eventbrite to organize parties if you can do so on a site that your friends and family likely already use? But the company isn't stopping there. In the coming weeks and months, Facebook is about to add even more features to Events, with a big push toward creating a bigger separation between public and private occasions.

Aditya Koolwal, the product manager for Facebook's Events team, says that event listings is perhaps one of the few things that Facebook is uniquely positioned to do really well. Not only do most people use the social network to connect with their friends and family, but also artists and venues that frequently organize events are on Facebook too. Put the two together, and you've got the makings of an events juggernaut.

But it wasn't until a few years ago that Facebook realized this potential. For a while, the Events system on Facebook was just a simple web-invite product geared toward organizing private gatherings like birthday parties. Then Koolwal joined the team a year and a half ago and started looking into how it was actually used. It turns out that more than 50 percent of people used Events for public events, not parties. That includes examples like farmer's markets, concerts, music festivals, book readings -- basically the sort of thing that you would normally find in the calendar section of the local newspaper. "We realized that we hadn't really built a product that was for public events," says Koolwal. "So we decided that we're going to really pursue private parties and public events as two separate paths." This means that Facebook is now starting to treat public and private events very differently, presenting and promoting them in distinct ways. You can already see the separation on how it's marketing the two paths in an events guide that Facebook launched a few weeks ago.

For one thing, public events now have larger header images. Going forward, they'll also have more context about what the place and event are about. Perhaps you'd see a profile of the artist if it's a concert, or photos of the venue if you're wondering what it looks like. Wall posts on public events will be less prominent, because you likely don't care too much about what strangers have to say about them.

Facebook has also started experimenting with adding events popular with friends or popular nearby in the left- and right-hand side columns of the site. As you might expect, Facebook is using the information it gleans about you -- the pages you like, the groups you're a part of -- to suss out what kinds of events you might be into. And if you seem interested in 'em, it'll surface even more related events for you. You might notice more suggested events in your newsfeed as a result.

Aside from spotlighting events in your newsfeed, Facebook wants to use notifications to keep you up-to-date on the latest goings-on as well. A few months ago, for example, it introduced the ability to subscribe to event calendars, which are sometimes published by performers or venues. So if you're subscribed to the SF Symphony and there's a concert coming up this weekend, you'll get an alert for it. There might be future plans for implementing notifications in events too, like recommendations for what to do this weekend if you're in town.

One other thing that the Facebook team is changing is this notion of what it means to "connect" to an event. Right now, if you're interested in an event, your only option of indicating enthusiasm is to select "Join." In normal parlance, that means that you're telling the organizer that you're going to attend. But Koolwal says that in most cases, people select Join not because they're actually going to attend, but because they're simply just flagging it for a follow-up. "A lot of what people are doing is collecting options," he says. "So at a given day, they'll look at their options and choose the best one." Right now the company is testing alternate options, like a "Follow" button, where you'll get event updates and so forth without committing to it, or a "Remind me" link to check out the event closer to the actual date. Personally, what I really want out of an events site is to give me a tailored list of what's going on this evening or this weekend in any given city. It's what I miss the most about Upcoming.org, a social calendar site that was bought and then put out to pasture by Yahoo (although it's currently being rescued by founder Andy Baio). Koolwal tells me that this is actually Facebook's eventual goal, but it's implementing the other changes to first bring greater awareness about events in the first place.

As for private parties, Facebook's going to be mixing that up too. Starting today, it will start testing new cover art themes for prettying up your party invitation on the Facebook app. It's something that users have wanted for a while now, says Koolwal. To start, there'll be 36 themes to choose from, including categories like family, holiday and seasons. It'll roll out to Android users first and then iOS folks later on.

"We're the only Facebook team that's geared towards getting you off of Facebook," jokes Koolwal. "We're helping people get outside for a change."

In this article: facebook
All products recommended by Engadget are selected by our editorial team, independent of our parent company. Some of our stories include affiliate links. If you buy something through one of these links, we may earn an affiliate commission.