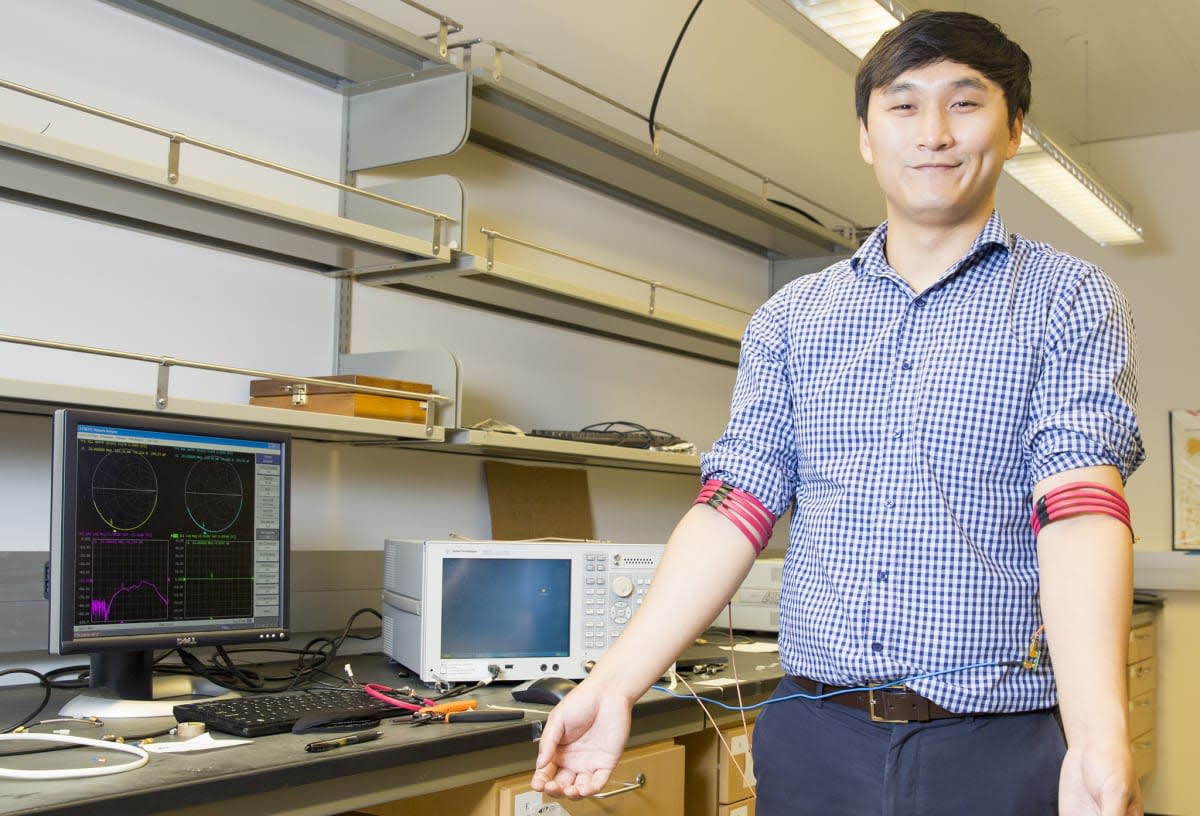 A team of researchers from the University of California, San Diego announced Tuesday that they had developed a proof-of-concept wireless transmission system that is both more efficient and more secure than Bluetooth. It works by sending data signals through your body's natural magnetic field instead of over the air and could lead to a new class of ultra-low power wearables.

Bluetooth is the current king of short range wireless communication but it has a number of shortcomings. While BT works efficiently when there is a clear air path between the two devices, it requires a significant power boost to push the signal through obstacles like the human body, known as "path loss". UCSD's system doesn't suffer from that problem because it uses the human body itself as a transmission medium to send magnetic signals between devices. In the prototype, PVC-wrapped wires coiled around the user's extremities generate magnetic fields that transmit signal between the various body parts.

It operates in essentially the same fashion as an MRI or wireless medical implant, albeit at a far lower energy level. In fact, the research team estimates that the path loss associated with this technique is roughly 10 million times lower than Bluetooth. That should translate into significant energy savings and longer battery lives. "A problem with wearable devices like smart watches is that they have short operating times because they are limited to using small batteries. With this magnetic field human body communication system, we hope to significantly reduce power consumption as well as how frequently users need to recharge their devices," UCSD Ph.D student and lead author Jiwoong Park said in a statement.

Additionally, this system offers increased security over existing wireless standards. Bluetooth signals emanate omni-directionally from their source up to 30 feet. Anybody within that perimeter can, theoretically, pick up that signal and intercept the data. But because this system's signal travels through the body, an eavesdropper would need to be all up in your grill, if not in direct physical contact, to intercept it. The team recently presented their findings at the 37th Annual International Conference of the IEEE Engineering in Medicine and Biology Society in Milan, Italy.

In this article: bluetooth, MagneticFields, Milan, UCSD
All products recommended by Engadget are selected by our editorial team, independent of our parent company. Some of our stories include affiliate links. If you buy something through one of these links, we may earn an affiliate commission.