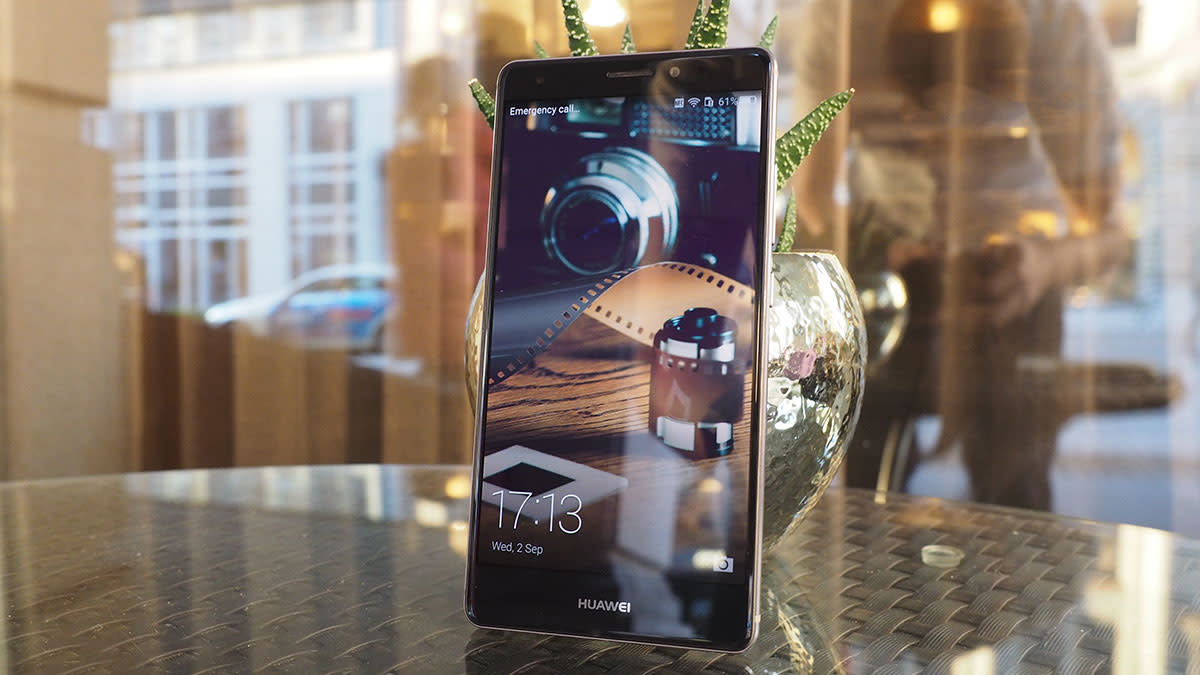 Today at its IFA 2015 press event, Huawei unveiled the Mate S, a follow-up to last year's fingerprint sensor-enabled Ascend Mate 7. The device, which has now shrunk in size from six inches to a more manageable 5.5 inches, is a refresh that borrows the all-metal looks of its predecessor. But more so than looking back to the Ascend Mate 7, Huawei's new flagship draws heavy comparison to Apple's marquee smartphone: the iPhone 6 Plus. Huawei CEO Richard Yu walked attendees through the basics of the Mate S: 5.5-inch 1080p screen with 2.5D fourth-generation Gorilla Glass display, 7.2mm thickness, Kirin chipset, 13-megapixel rear camera with optical image stabilization, stepped battery rated for over one full day and an improved rear-fixed fingerprint sensor. Where the Mate S' design is concerned, Yu specifically called out its curved metal build -- what he referred to as "diamond cut" -- as being more comfortable for most consumers to hold. Gone from the Mate S are the typical Android shortcut keys as they are now hidden in the Mate S' "magic bottom" just beneath the screen. (Update: This applies only to the 128GB Force Touch model) And down at the base, surrounding the micro-USB port, are dual speakers.

As for its antenna design, he displayed the Mate S side by side with the iPhone 6 Plus to demonstrate how similar the design is, although Huawei's managed to make that banding 0.5mm thinner. But that's not the only iPhone 6 Plus comparison Yu was eager to highlight; the Mate S also features fast charging -- reportedly up to "2x faster" than the iPhone 6 Plus.

The real emphasis of Yu's presentation was on the gesture improvements made to the Mate S in the form of its fingerprint sensor, "Knuckle sense 2.0" functionality and its "Force Touch" screen. For that rear sensor, fingerprint recognition and speed has been increased by 100 percent -- making sweaty or wet hands less of an issue -- with directional swipes triggering specific actions. For example, beyond simply unlocking the phone, the sensor can be used to scroll through notifications with a vertical swipe; navigate through photos with a horizontal swipe; answer phone calls; and even capture selfies with its 8-megapixel front-facing camera (which now packs a soft light).

Knuckle sense 2.0, one of the Mate S' more dubious features, allows consumers to drag their knuckles down a page to effect a long screen capture; or scrawl letters to trigger certain apps like "M" for music or "C" for camera. And the new "Force Touch" screen offers the ability to zoom in closer to photos for detail or photo previews while browsing the gallery.

Where the Mate S breaks from the pack is in how it manages data: The device has two SIM slots so users can jump between separate LTE connections. Yu said the device can support up to 13 major LTE frequencies across the United States, Asia and Europe. It'll be available starting in September (pre-orders begin on the 15th) in two versions: a 649 euro standard version that comes in either mystique champagne or titanium gray and has 3GB RAM/32GB storage; a 699 euro premium version in prestige gold or coral pink that ups the storage to 64GB. Pricing for a Force Touch-enabled 128GB Mate S will be announced at a later date.

Photos: Mat Smith
In this article: hands-on, Huawei, ifa, IFA2015, MateS, mobilepostcross
All products recommended by Engadget are selected by our editorial team, independent of our parent company. Some of our stories include affiliate links. If you buy something through one of these links, we may earn an affiliate commission.