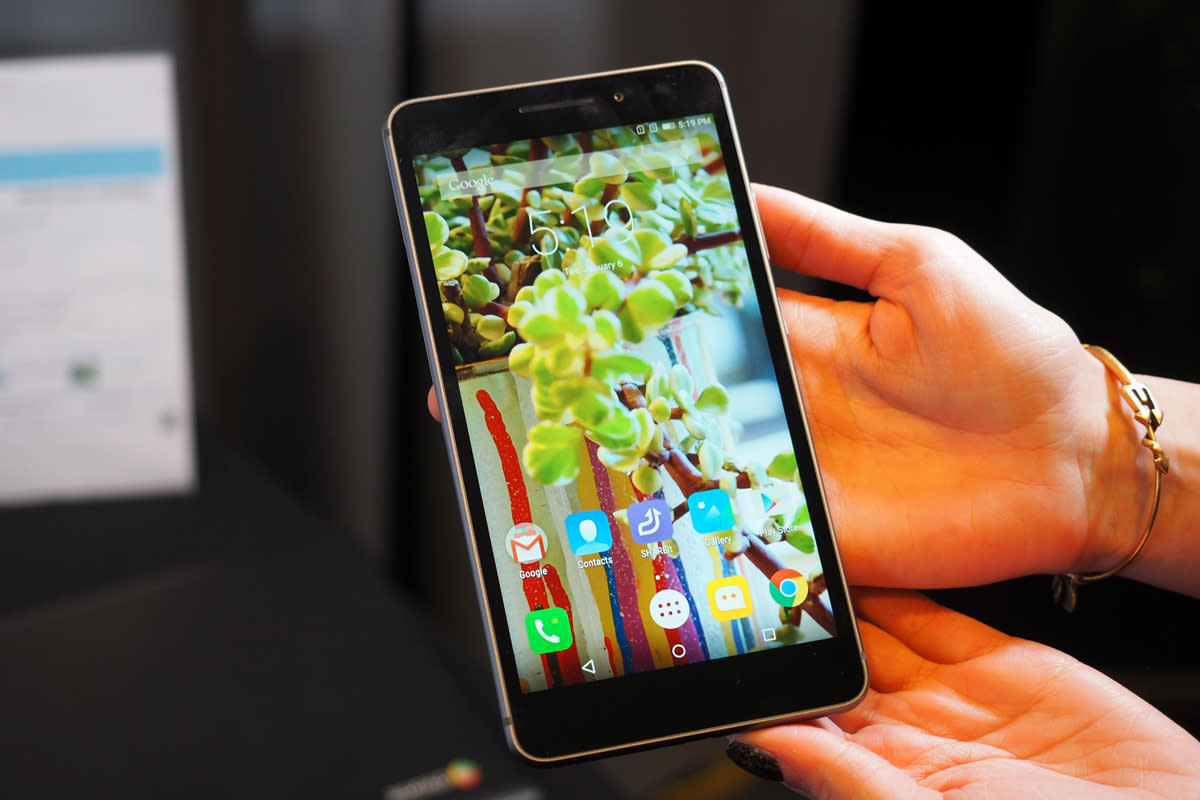 "Phablet" may be a horrible word, but it was a pretty accurate descriptor when Samsung launched its then-massive Galaxy Note way back in 2011. Since then, it's become difficult to find a premium smartphone that doesn't have a screen measuring well over five inches, thus making the term phablet a bit unnecessary. That is, unless you're Lenovo. Today at IFA, the company is officially introducing two phones called the Phab and Phab Plus, and their screen sizes are as ridiculous as their names. The higher-end Phab Plus sports a monstrous 6.8-inch, 1080p display while the Phab comes in at an even larger 6.98 inches. Let us pause, and remember that it wasn't long ago that 7-inch screens were solely the domain of small-ish tablets. These aren't so much phablets as they are tablets that can make phone calls. With that out of the way, let's focus on the Phab Plus, a phone that arrived in China a few weeks ago and certainly the more interesting of the two devices. Lenovo humorously claims that the device's design is such that it can call it "optimized for one-handed use," something that would be funny if it weren't so sad. That said, the Android 5.0 phone does feature a software trick that pops up a smaller one-handed keyboard that snaps in place and resizes to fit your fingers. There are a few other tricks here to navigate the unruly size, like double-tapping to turn the screen on and long-pressing anywhere on the display to take a photo.

Spec-wise, the dual-SIM Phab Plus features 32GB of storage, a 13-megapixel main camera (the front-facing camera comes in at five megapixels), a 3,500mAh battery and a Qualcomm Snapdragon 615 processor with 2GB of RAM. Not bad for only $299 if you need a tablet that can make the occasional phone call. The $179 Phab, however, is less enticing -- its 7-inch screen is described as "HD" rather than "full HD," which makes us think the massive panel is only sporting a 720p resolution. It features an unnamed octa-core Qualcomm processor, 1GB of RAM and a huge 4250mAh battery to power its similarly huge display.

Despite the insanity on display here, these are hardly the first phones this big -- the Huawei P8 Max is another option if you want your phone and tablet to truly converge. But despite our love for everything supersized in the USA, it looks like Lenovo doesn't think the country is quite ready for these phones yet. They'll be available in countries throughout Asia, Eastern Europe and South America, but no US launch is on tap.

In this article: hands-on, hugephones, ifa, ifa2015, lenovo, mobilepostcross, phab, phablet, phabplus
All products recommended by Engadget are selected by our editorial team, independent of our parent company. Some of our stories include affiliate links. If you buy something through one of these links, we may earn an affiliate commission.