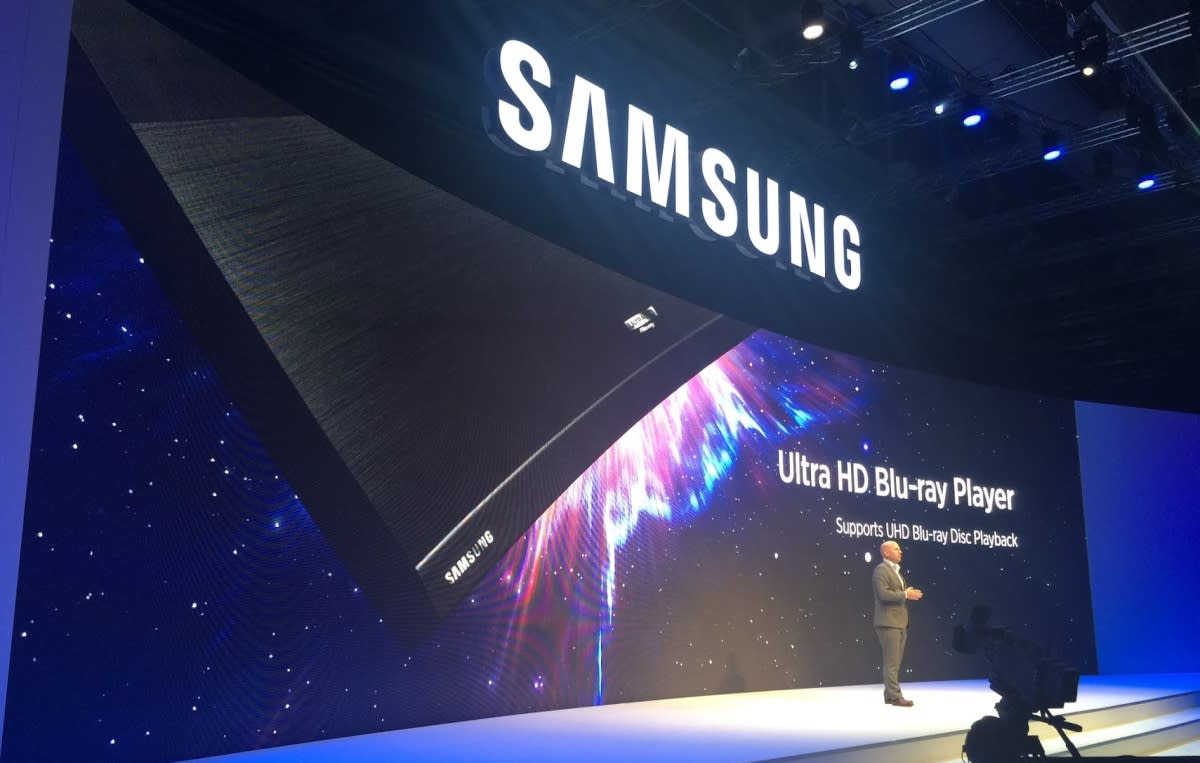 Today Samsung is the first company to announce an Ultra HD Blu-ray player, taking the lead in 4K and HDR video. Following up on its big Ultra HD push at CES and the movie-streaming/download tech that has arrived in the months since, Samsung is ready to push super-high-resolution movies (four times the resolution of Blu-ray, and 64 times as many colors) on discs too. There's not much detail available on its new player, although we expect it will cost less than the $1,000 price its first Blu-ray player commanded nearly a decade ago and it should launch early next year. Joining the tech company on its IFA 2015 stage are Fox execs, with President Mike Dunn proclaiming the studio is committed to releasing its slate of upcoming movies in Ultra HD with HDR day-and-date with the Blu-ray and Digital HD releases. That includes Fantastic Four, Maze Runner, Kingsman: The Secret Service and more.

Samsung's Ultra HD Blu-ray player is curved to match its TVs, and also includes a number of UHD streaming services. The other news today at IFA is that Samsung's TVs will be the first ones getting a software update to support HDMI 2.0a, necessary to receive HDR info from the new Blu-ray players. As far as that UHD Alliance the tech industry and Hollywood are creating to push their new video standards, Fox CTO Hanno Basse said it has tripled in size, and hopes to share more details in "the coming months."

Check out all the news from Berlin at our IFA 2015 hub.
In this article: 4K, Blu-ray, Fox, hdpostcross, HDR, IFA, IFA2015, microsoft, MikeDunn, samsung, SUHD, UltraHD, UltraHDBlu-ray
All products recommended by Engadget are selected by our editorial team, independent of our parent company. Some of our stories include affiliate links. If you buy something through one of these links, we may earn an affiliate commission.