Rumor: LG releasing a phone with a secondary 'ticker' display 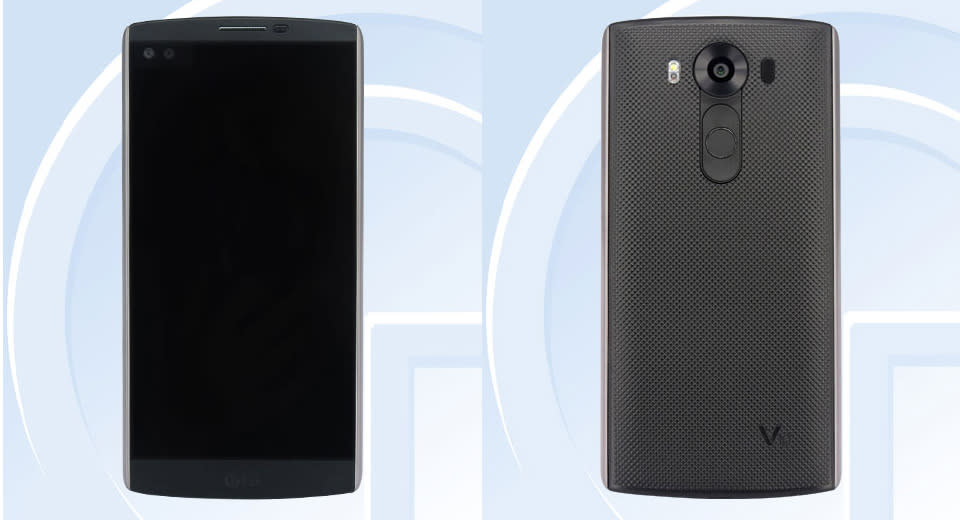 LG is launching a phone called the V10 with a small auxiliary "ticker" display above the main screen, according to Evan Blass (@evleaks) and photos from Chinese regulator Tenaa. That might sound bizarre, but it was actually used before on Samsung's Continuum, a 2010 Galaxy S Verizon variant. Still, it's a unusual idea for a modern phone that otherwise looks rather decent. According to Blass, it'll have a 5.7-inch 2,560 x 1,440 screen, Snapdragon 808 CPU, 3GB memory, 16-megapixel rear/5-megapixel front cameras, expandable memory and a back fingerprint scanner.

We're not sure what LG will put on the ticker -- perhaps some kind of launcher like Samsung uses on the curved sides of the Galaxy Note Edge. While the phone has a removable-looking plastic back, the frame itself appears to be metal, according to the Tenaa photos (which have since been pulled). Provided all this info is correct, we should see the handset imminently, given that it's cleared the regulatory hurdle. With the dual-sim setup shown in the Tenaa listing, there's no guarantee it'll come to North America or Europe, however.

In this article: GalaxyContinuum, leak, lg, LG-H968, mobilepostcross, rumor, V10
All products recommended by Engadget are selected by our editorial team, independent of our parent company. Some of our stories include affiliate links. If you buy something through one of these links, we may earn an affiliate commission.