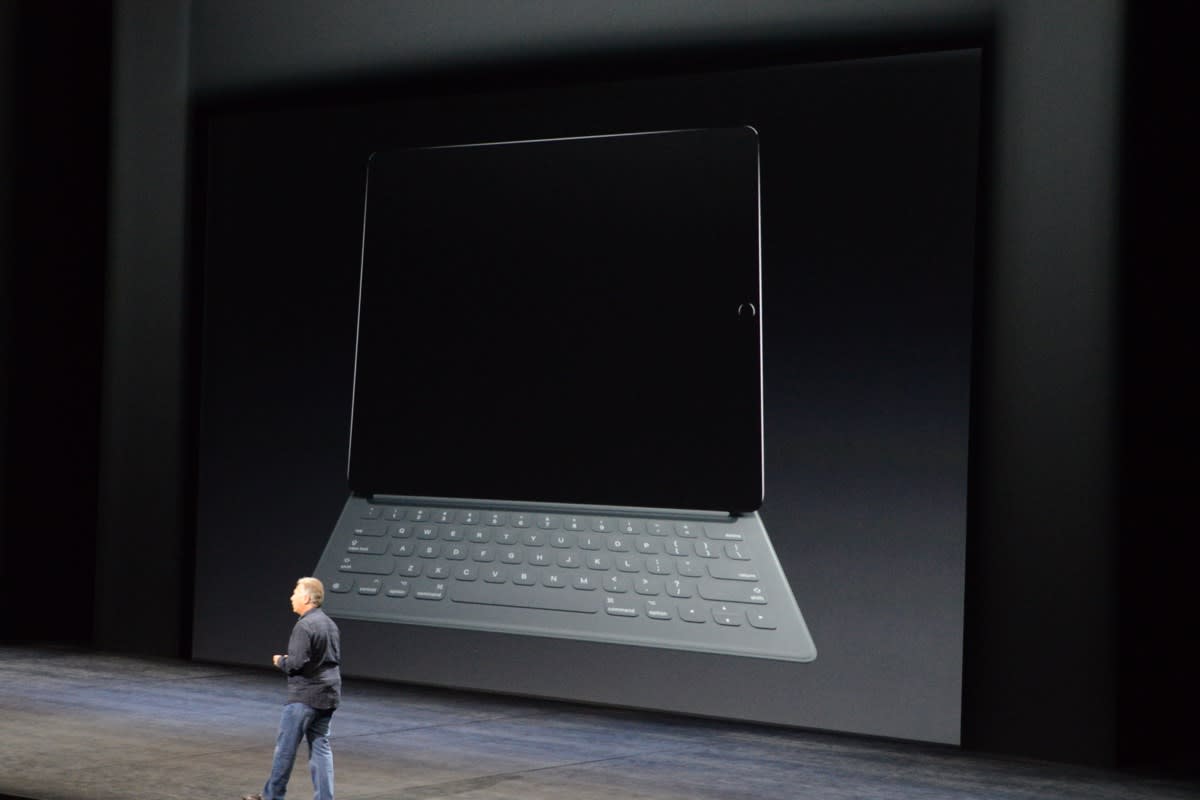 Apple's larger iPad Pro is aimed at suits and other creative professionals that want to get work done. Although its 12.9-inch display offers plenty of pixels for your fingers to poke at, the company will also be offering a standalone keyboard and stylus accessories. The latter is called the Pencil, and in typical Apple fashion it's a simple, minimalist-looking tool. It has pressure sensitivity -- meaning you can press harder for thicker, darker strokes -- as well as tilt sensors for realistic shading. While you're scribbling on the iPad Pro, Apple says the tablet's subsystem scans for Pencil's signal 240 times per second, recording your input with "lightning-fast responsiveness" as a result. Pencil's internal battery lasts for 12 hours and with the hidden Lightning connector you can plug it directly into the iPad Pro for easy charging -- just 15 seconds gives you another 30 minutes of battery life, Apple claims.

The Smart Keyboard, meanwhile, attaches to the iPad Pro using a new port on the side of the tablet. Apple's calling it the Smart Connector -- it looks like three small, circular buttons and supplies both power and data to the keyboard when you need to do some serious typing. It's made from a special fabric and, similar to Apple's other iPad cases, you can wrap it around the back and prop your tablet up with a triangular-shaped hinge. The accessory includes a full QWERTY layout -- no numeric keypad though, which is no great surprise -- and each individual key uses a butterfly mechanism similar to Apple's 12-inch MacBook. Do both of these tools sound familiar? They should, because it's the same one-two punch that Microsoft has been touting with its Surface laptop-tablet hybrids. Not that there's anything wrong with "copying" the competition, but it's notable that Apple seems to be taking a page out of Microsoft's playbook, rather than the other way around.

Both accessories are launching in November, and you'll have to buy them separately from the iPad Pro. The Smart Keyboard costs $169, while the Pencil comes in at $99. That's an extra $268 on top of the iPad Pro's $799 starting price, tipping the set over the $1,000 mark. Not cheap, but that's often the case with Apple's "Pro" products, isn't it?

In this article: apple, ipad, IpadPro, iphone2015, keyboard, stylus
All products recommended by Engadget are selected by our editorial team, independent of our parent company. Some of our stories include affiliate links. If you buy something through one of these links, we may earn an affiliate commission.