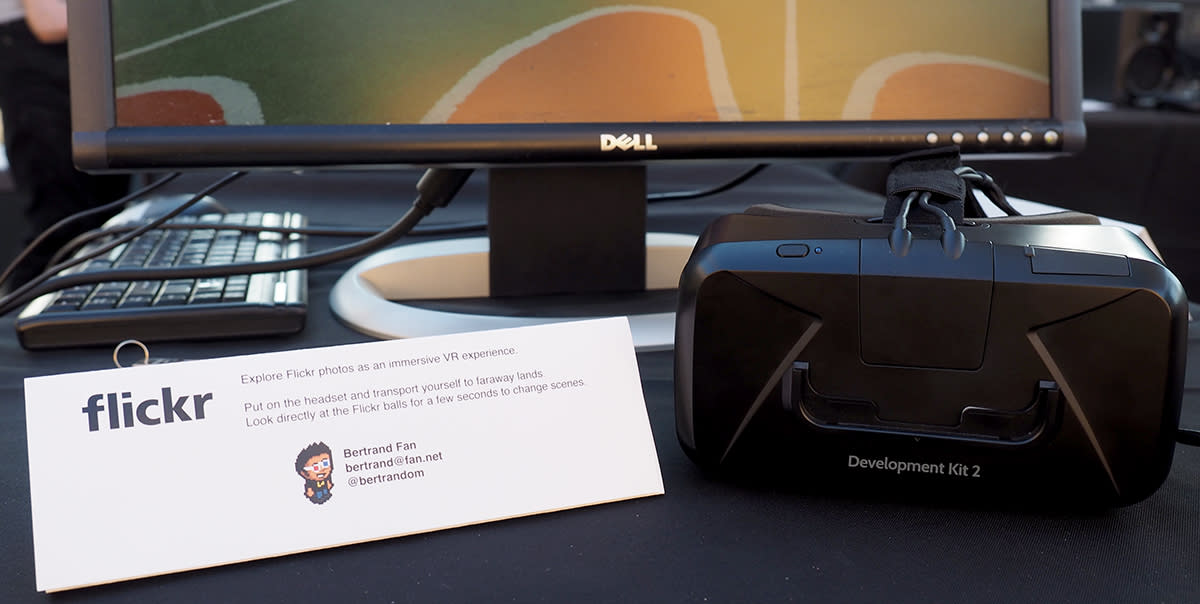 Some day you could be flipping through your vacation photos while wearing a VR headset. At the XOXO Festival taking place in Portland, Oregon this weekend, Flickr is showing off an early preview of a virtual reality experience that it hopes to integrate with its photo service. The demo at the festival was with an Oculus DK 2 hooked up to a PC and the idea is that you'll be able to use the headset specifically with 360-degree panoramic photos. I tried it on and indeed I was able to look all around me in 360 degrees to view an entire scene. To flip through the slides, I looked down at a pair of pink and blue balls for a couple of seconds, which triggers the next photo to load.

Of course, this is still very early days, and a lot of this could change. Bertrand Fan, the front-end architect for Flickr who was heading up the project (and whose contact info you can see in the image above, which he said was fine for me to post on the internet), says he's only been working on it for the past couple of weeks. The plan right now is to add a VR headset link or button at every page with a 360-degree photo, so if you happen to have a VR headset lying around, you can try the VR experience out. The Flickr VR demo currently only works with the Oculus, but Fan hopes to have it integrated with the Gear VR and other VR headsets as well.

As for whether there are a ton of 360-degree photos out there, he tells me that it's actually a fairly burgeoning community. You can take these photos with your phone in some instances (through Google photosphere stitching) or with cameras like the Ricoh Theta. He says that there'll eventually be an Explore Section on Flickr devoted to 360-degree panoramic photos.

But Fan's ambitions for Flickr VR extends beyond just slideshows. He tells me that some day he wants it to be possible for you to browse through your library and even organize your photos into albums just by waving your hands, Minority Report-style. He hopes to roll out the initial stages of Flickr VR to the general public by early next year.

In this article: flickr, virtualreality, vr, xoxo2015, xoxofest
All products recommended by Engadget are selected by our editorial team, independent of our parent company. Some of our stories include affiliate links. If you buy something through one of these links, we may earn an affiliate commission.