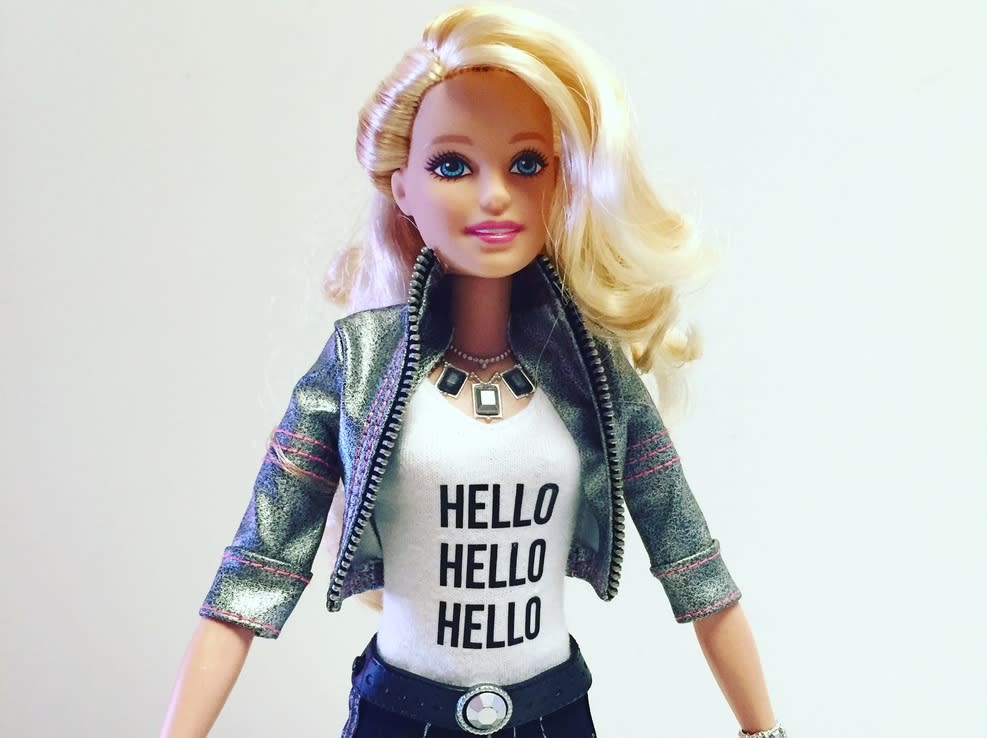 There's a new Barbie on the block. She's chatty and she comes with a charging station. She's dressed in a cropped, metallic leather jacket, dark skinny jeans and a white sweater vest with the word "HELLO" printed thrice on the front. Within seconds of switching her on, her chunky necklace lights up as it searches for a WiFi connection. When the LED goes from red to green, you know she's ready to play. A shiny, round belt buckle doubles as a button. You press it down to activate speech-recognition for your child's first two-way conversation with the iconic, inanimate doll.

Now that playtime includes light-as-air gadgets and power-packed game consoles, Barbie's historically staggering sales have been in a constant slump over the past three years. But with this talk-back, feature Mattel's premier product might have a fighting chance. Hello Barbie blazes into the world of interactive toys as the first doll equipped with artificial intelligence.

The first time I hear her talk, she sounds perky, friendly and even strangely familiar. The voice seems to fit the character. "What do you want to be when you grow?" She jumps right to it. Depending on the response she gets, she offers some career options. For instance, if you say you want to be a scientist, she's quick to compare your aspirations to Marie Curie or Albert Einstein. As she continues to prompt and control the conversation, she leads you to your interests. So if you point out that you like animals, she responds with one of her preset options -- "Do you want to take care of them like a veterinarian or study them like a zoologist?"

Mattel believes eliciting a conversation in this way encourages children to think and communicate, but it also allows them to get to know Barbie a little bit better. This doll has clearly gone from being one of many passive objects on your child's shelf to a conversationalist who wants to know more about her playmate. Through that process, she reveals a fully fleshed-out personality that was always in the background. (Who knew her full name is Barbara Millicent Roberts?) As a character that's been around for 56 years, she certainly has a solid backstory to dip into. If asked, she can talk about her own life, including her seven siblings. But she mostly comes equipped with opinions about pets, professions, food or some such, and asks questions. She also slips in a bunch of enthusiastic comments that range from affirmations (there seems to be no wrong answer when you're chatting with Barbie) to factual snippets like, "Did you know a cat can see six times better than a human?"

It starts to feel like she might be able to respond to every conversational need a child might have and that's unsettling. Does a child need a digital assistant wrapped up in a doll? In Barbie's defense, though, she's nothing like Apple's Siri or Microsoft's Cortana. She doesn't trawl the web for answers, and isn't designed to address every question. There are things that she doesn't know and that's supposed to be a part of her character. When that happens, instead of an awkward pause that was already ruled out during the testing rounds, this almost-ready-for-the-market Barbie will swiftly steer the conversation back to the things that she does know -- or at least is pre-programmed to talk about.

Every response is part of her "content library" that is currently capped at 8,000 predetermined dialogues. Her voice, recorded by a voice artist, is overtly animated yet carefully directed to be relatable for six- to eight-year-old girls, the target group for the talking doll.

It's precisely this target audience -- an impressionable and vulnerable age group -- that had privacy advocates raising concerns over Hello Barbie's communicative ways. The doll picks up the child's audio and pushes it through servers where the conversation is stored. The makers of the doll, including San Francisco-based ToyTalk (a company that develops voice-recognition software for toys and apps), point out that the audio is stored specifically for parents to access at any given time. Through an accompanying app (available for both iOS and Android), parents can log in to listen or choose to delete the child's personal conversations with her doll. It's also quick to add that it isn't an "always-on" product -- a child would need to press down the belt buckle to be "heard" by its servers. Issues like privacy and security against hacks are deeply troubling when it comes to AI toys. But neither of those concerns seems lost on the company that is in the business of delivering dolls to suit every generation. Whether those concerns have been fully addressed will be seen in November when the doll hits the shelves.

Technology isn't perfect; neither is this doll. Like any other mundane device, even the stylized Barbie can have trouble connecting to a WiFi connection. The necklace can continue to blink and search for a network as you, or in this case an excited child, might impatiently look on. The doll is also another product in the ever-increasing list of things that need constant charging -- "My battery needs to be recharged; please connect me to the charging station," isn't the ideal response from a doll when it's time to play. But for a generation that's starting to integrate swift swipes on a high-definition screen into their play routines, perhaps these glitches won't get in the way of their next $75 Barbie purchase.

In this article: AI, Barbie, hands-on, HelloBarbie, Mattel, speechrecognition, TalkingBarbie, ToyTalk
All products recommended by Engadget are selected by our editorial team, independent of our parent company. Some of our stories include affiliate links. If you buy something through one of these links, we may earn an affiliate commission.