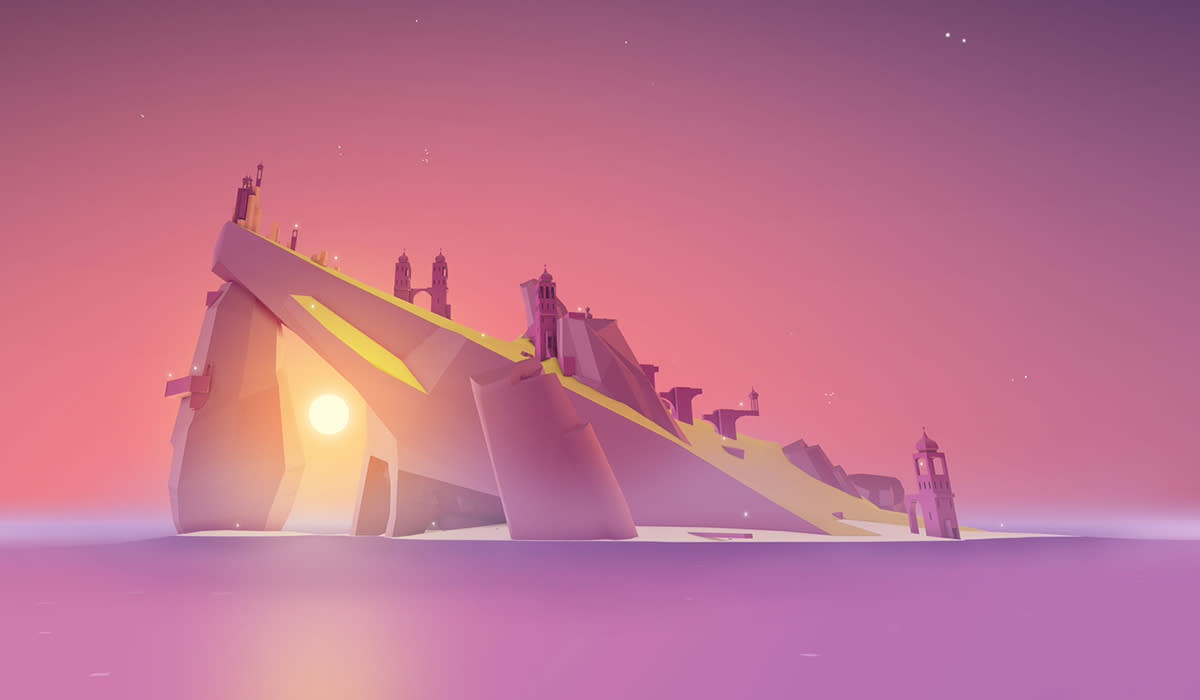 It's a tough act to follow, selling over 2 million copies of a game in a single year. That's the task that Ustwo, the British developer behind the award-winning Monument Valley, was facing as it started work on its latest effort Land's End, a virtual reality adventure game created exclusively for Samsung's Gear VR headset. Going from building a game for mobile to one that will only run on a specific accessory for a handful of Samsung phones is a bold move. And as the studio's lead designer and technical director explain, it wasn't even their initial plan.

Due for release on October 30th, Land's End is a first-person game that plays out like an old-school point-and-click adventure. Something like Myst, except, with no actual pointing or clicking. Maybe "look-and-stare adventure" is a more apt title for the genre as it's presented here. You move your head to look around a scene, and navigate from point to point by fixing your gaze on small white indicators. You just focus on a point for a second or so, and then you start moving.

"We didn't set out to make a VR game," Peter Pashley, technical director at Ustwo, said after we played through the demo. He explained that while the game was still being prototyped as a non-VR title, the studio tried out the Gear VR headset, and was impressed by the "step change" it represented over the then-current Oculus Rift development kit. "Going from something that felt like this clunky bit of technology on your head to having a relatively light, well-fitting, good-tracking, low-latency headset ... it was exciting to see that." Following the initial reaction, the team decided to "spend some time trying VR stuff," and things grew from there.

Every few minutes, you'll come across a puzzle, which will require you to levitate blocks or join dots — again, using nothing but head movements and indicators — to advance. The two levels we played offered a relaxing, almost purifying experience. We explored the pastel-hued, dream-like locales at our own pace, took in the scenery and solved the gentle puzzles without great difficulty. The experience leaves a feeling, like somehow you've been to this world before, even though you know you haven't. A false memory, perhaps evoked by the common spirit shared between Land's End and Monument Valley. As in its predecessor, the complexity of the puzzles does increase with each level, but never to the point where it becomes too taxing. Despite the similarity in tone, though, Land's End feels fresh and new. It's not a sequel or something derivative of Ustwo's past success.

Figuring out how to enable movement in VR without inducing nausea took months.

Helping maintain this relaxed, soothing experience was the fact that, even after 30 minutes or so, Land's End didn't provoke even a hint of nausea. It's something many complain about with VR. Figuring out exactly how the movement should work apparently took months. Early concepts saw you "sat on the shoulders of a giant telling it where to go," said Pashley, but it quickly became apparent that gamers felt sick when they weren't in full control of the motion. The end result of Ustwo's experimentation is a controlled, slow game. "The fact that [movement] is pretty much in a straight line and at a deliberate speed is good for nausea," Pashley continued, "but the fact that you focus on a point first, you're paying attention and your mind is focused in that direction really helps as well."

The comparisons to Monument Valley are inevitable. As is the fact that, when you try, you can find analogs between the two. The team has grown with its success, from eight up to the 11 creatives who work from Ustwo's office in the heart of London's East End. But the key names involved in its first game remain. While Pashley led programming on Monument Valley, it was Ken Wong, lead designer at the studio, whose concept drawings first inspired what was then better-known as a design agency to risk close to $1 million by developing Monument Valley, and it's Wong leading the design on Land's End.

"We thought we were building 'Monument Valley' for hipsters."

"We thought we were building Monument Valley for hipsters," Wong explained, but it wasn't long after release that the studio realized its wider impact. "Everyone I meet that's played it tells me 'Oh, I played it with my niece,' or, 'Oh, I showed it to my dad and he doesn't even like computer games and still got into it.' That made making that game so rewarding -- to know that we're getting through to people that don't like games." At this point, Pashley interjects. "It felt like a validation of our approach," he said. "That if we try to make something the best we can, and the best designed for the platform it's on, then people will like it, and it'll end up being worth it." Wong agreed, adding that "even though Land's End is a single-player experience, that aspect of sharing is something that we'd really like to have again."

Both Pashley and Wong, like everyone else involved in the game, must know that even a "perfect" Gear VR game will not get close to Monument Valley's multimillion-dollar success. Although we don't know the total number of Samsung headsets out there, it's surely nowhere near a million, let alone two. But Ustwo still has lofty ambitions. "We hope that it'll be the thing that people use to show off Gear VR," said Wong, "that if people have tried the Gear VR, they've tried Land's End."

In some ways, the desire for Land's End to be a defining moment in the evolution of VR is even more ambitious than "just" selling a few million copies. Wong talked dreamily of early adopters and VR enthusiasts taking their headsets to cafes, picnics or bars and excitedly sharing Ustwo's creation with their friends. It's a nice thought, and given Monument Valley's success, not an impossible one.

So Land's End is a single-player game, then, but one that's meant for sharing. It's short, even by mobile standards, with roughly an hour's worth of gameplay in total. Ustwo envisions players taking in the game over a few sessions -- "I think only me and my girlfriend have played it all in one sitting," said Wong. "It's not really intended for that. ... We're totally aiming for a very casual audience. Anyone that could possibly be interested in VR, come check out Land's End."

If you have a Gear VR, you should check it out. It's out on October 30th for an undisclosed price, but we'd happily pay a few dollars just for the two stages (there are five in total) we've played through. It's impossible to say if Ustwo has achieved its goal, and made not just a VR game, but an early ambassador for the not-yet-understood mobile VR space. But it's definitely made a good VR game, and one that feels polished and accessible to the point that you could probably hand it to an aging relative and they'd still have a blast.

In this article: LandsEnd, mobilepostcross, MonumentValley, ustwo
All products recommended by Engadget are selected by our editorial team, independent of our parent company. Some of our stories include affiliate links. If you buy something through one of these links, we may earn an affiliate commission.