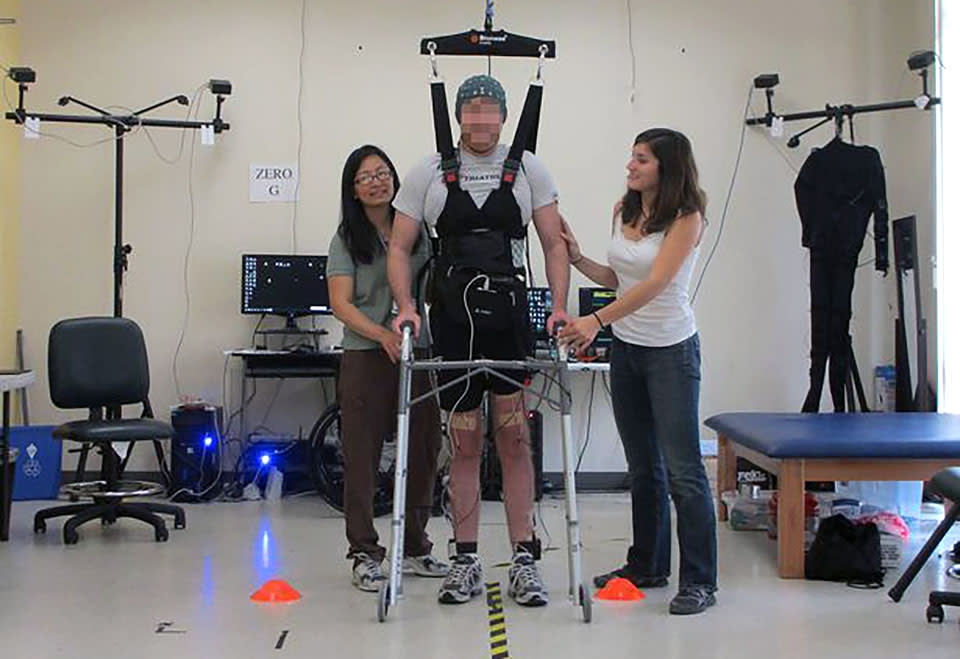 A paraplegic has walked without robotics using his own brain waves, thanks to research done at Southern California's UC Irvine. Scientists used a computer to "link" 28-year-old Adam Fritz's brain to his legs over a Bluetooth connection, bypassing the severed region of his spinal cord. An EEG then picked up signals from his brain, which were relayed by a "brain-control interface" (BCI) computer to electrodes on his knee, triggering walking movements. Though Fritz was supported and only walked haltingly for 12 feet, the research is being heralded as a milestone -- so far, paralyzed patients have only be able to walk using suits like that from Ekso Bionics.

It wasn't just a matter of strapping on the EEG cap and taking a stroll. Prior to the attempt, Fritz underwent extensive physical rehab to strengthen his muscles and learned to control a virtual avatar using the BCI device. He also made similar movements in the lab while suspended slightly above the floor. During a conversation with Sky News, Fritz dubbed the interface a "mind walker," and said, "it's complete concentration. You have to think about every single step when you're doing it."

Despite the success, the team said there's still a lot of work to be done before patients can gain any mobility. The next step is to reduce the EEG components enough that they can be implanted in the brain, which could give patients more precise control the and the ability to "sense" pressure. Meanwhile, Fritz described the experience as "incredible," saying, "when you're first injured, you're sitting in hospital hoping you'll walk again, but when it actually happened it was a dream come true."

In this article: brain-computer interface, eeg, neuroscience, paralyzed, UC Irvine, video
All products recommended by Engadget are selected by our editorial team, independent of our parent company. Some of our stories include affiliate links. If you buy something through one of these links, we may earn an affiliate commission.