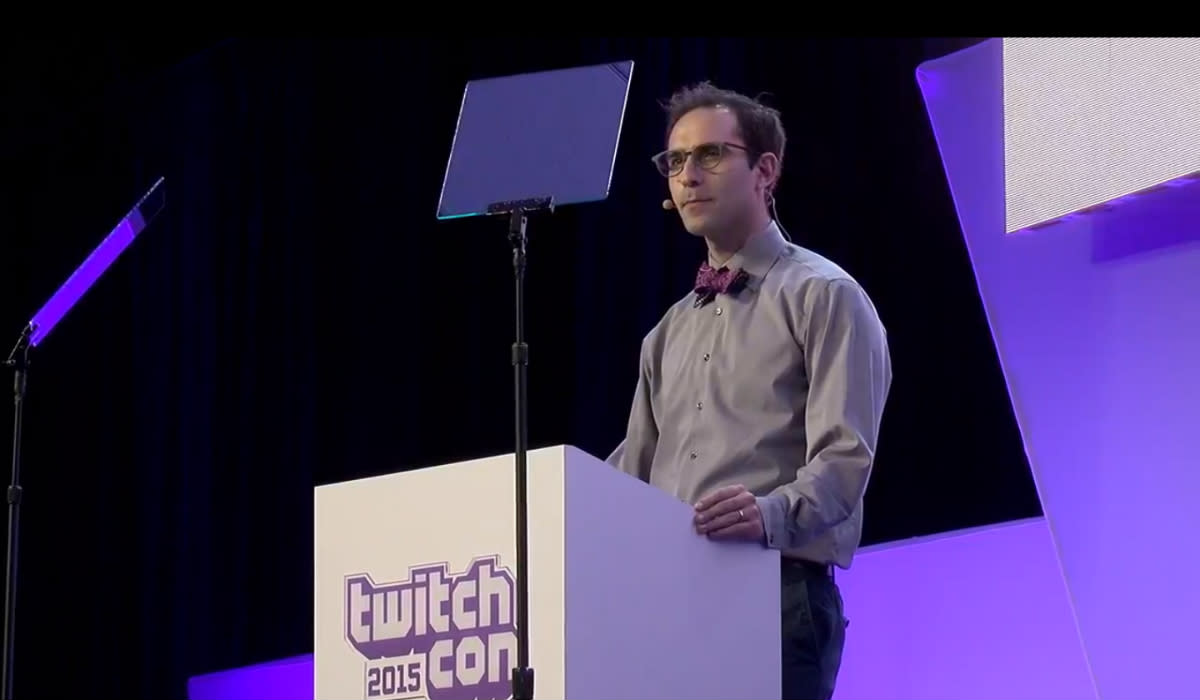 When YouTube announced its new gaming-focused livestreaming program, YouTube Gaming, Twitch SVP of Marketing Matthew DiPietro released a statement reminding everyone that his company did it first. "The opportunity in gaming video is enormous, and others have clearly taken notice," he said. "We're proud of what we've accomplished in the last four years, but our eyes are on the future." DiPietro said that Twitch was listening to its users' requests and it had a lot of changes in store. And, following YouTube Gaming's robust, feature-laden launch, Twitch needed a serious update. Now, as announced at the first-ever TwitchCon keynote address, it's getting exactly that.

Onstage today, Twitch co-founder Emmett Shear (pictured above) introduced some new Twitch features by saying, "I want to bring to you a bunch of little, but important, things that we think will make your Twitch experience just that little bit more fun." And it's true, Twitch's announcements may seem like granular changes, but they should have a big impact on the way people consume the site's content. The major (minor) updates are as follows:

These changes in particular feel like a direct reply to YouTube Gaming. One of the biggest gripes with Twitch is also a huge reason it attained rapid success -- it emphasizes live content, rather than archived videos. In this sense, Twitch is almost a throwback to the days before DVR and streaming video. Content is available when it's live, and it could disappear or be difficult to track down afterward. It's like the days when you had to be home at 8PM every Sunday to watch The Simpsons, or else you'd have nothing to talk about around the water cooler the next day. Now, you can set the DVR and watch when you have the time. This formula of modern convenience is at the heart of Twitch's -- and YouTube Gaming's -- new vision.

Video game streamer HikePlays has 1.5 million subscribers on YouTube and he helped the company set up its new Gaming section. We spoke with him just before the site's launch and he laid out the numbers behind his attraction to YouTube over Twitch: Just 10 to 20 percent of his views stemmed from live shows. The majority of his audience tuned into archived streams, so it was beneficial to have all of his recorded videos front-and-center, rather than second-tier. YouTube Gaming allows streamers to showcase playlists of past videos and reams of archived content. Now, Twitch will, too.

Twitch's new Playlist and video-on-demand options attempt to close the gap between its live and archived content, highlighting previous broadcasts as well as live shows. Video uploads allow streamers to plan more organized segments with higher production values, just like YouTube has for years. Switching to HTML5 should modernize Twitch's video quality and its embed options, an essential part of YouTube's own success. Whisper is the icing on the cake: Popping out private messages directly in the Twitch app and site is a fancy little feature that YouTube Gaming simply doesn't have yet.

Twitch is aiming to become a hub for gaming videos, 24 hours a day, seven days a week. After all, very few people in the 1980s turned on the TV to watch stations sign off. Now, instead of finding a Twitch streamer's page and seeing an "offline" notification, viewers will get playlists of curated content and uploaded videos. YouTube Gaming clearly learned a ton from Twitch's experiments in video game streaming, and this time around, Twitch is taking some lessons from YouTube.

In this article: amazon, hdpostcross, streaming, twitch, twitchcon, youtube, youtubegaming
All products recommended by Engadget are selected by our editorial team, independent of our parent company. Some of our stories include affiliate links. If you buy something through one of these links, we may earn an affiliate commission.