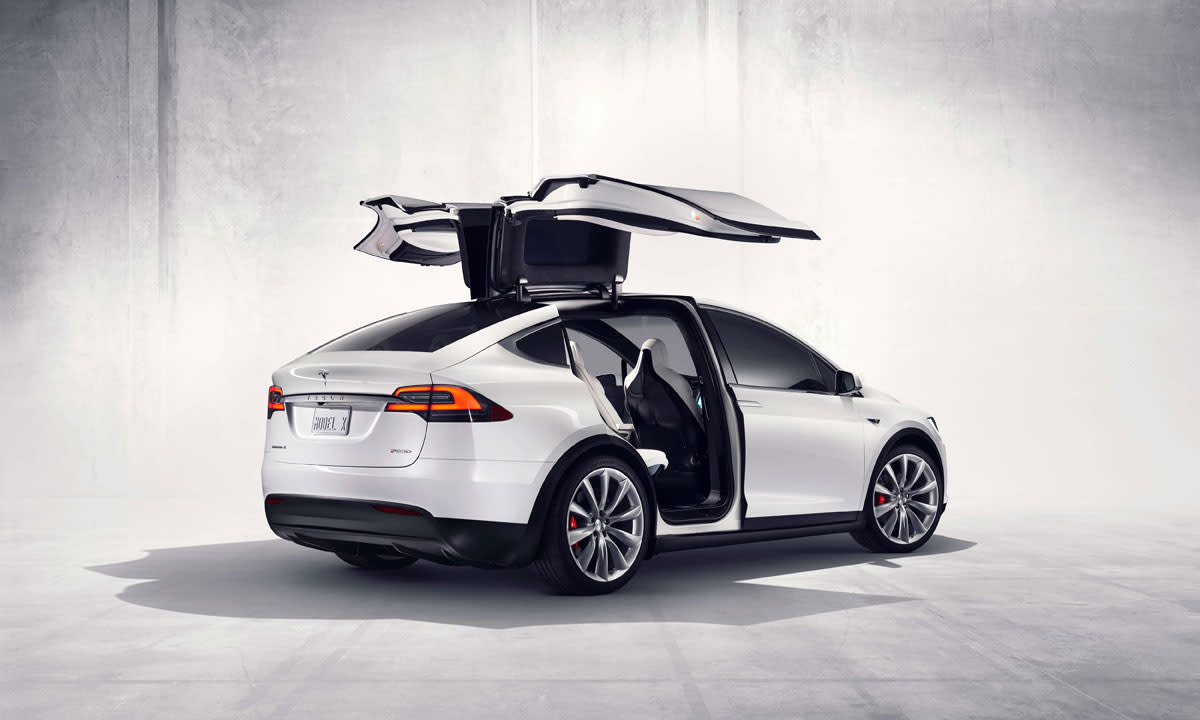 Now that Tesla's Model S has the world warmed up to the idea of classy-looking electric cars, it's ready to do it all again with a different form factor. After delays (and more delays), CEO Elon Musk announced the Model X in full specific detail -- much to the delight to those that put down some heavy deposits years back. A cheat sheet for what you'll get for waiting? Falcon wing doors to access the back; a scooch slower than the Model S; but also a taller and bigger interior than its forebear. It'll initially come in two models (at two prices): Reuters reports prices as $132,000 for the P90D Signature and $142,000 for the P90D Founder edition. (Update: The company has not said when the cheaper versions of the X will be available, but the CEO told press that the models will cost roughly $5,000 more than a comparable Model S).The future isn't cheap, but let's take a look at what alleged time-traveler Musk has crammed underneath those falcon wings. Let's start with safety. Because, well, it's a car. No kidding, the Model X has a bioweapon defense mode button -- one that seals the car with true HEPA filters that are 10 times larger than a regular car's. At the launch event, Musk described that interior of the Model X was "like a hospital."

Tesla calls the Model X the safest car in the world: The company even states it'll receive a five-star safety rating -- before it's even taken the test. That's brassy... and it would make the car the first-ever SUV to do so. Active safety is at the core of all of this: Automatic emergency braking and side-collision avoidance is built-in. That emergency braking even works at high speed -- another Tesla-only feature. There are forward-looking cameras, radar and even a 360-degree sonar for autopilot features. The company is promising to update the vehicle through software with even more features for lazy drivers including, yes, Autopark.

Those wings. The Tesla Model X's falcon doors are actuated on a pair of hinges. It can cheekily open itself while being crammed between two parked cars -- you'll need only 30 cm (around 12 inches) of space to open up. Sensors can also detect the ceiling height to decide how far to open the doors. Oh, and the "auto-presenting" driver door automatically opens when you get near it. Inside, seats move by reading your mind independently of each other for easy access to the back seat. As you might be able to tell from photos, that huge windscreen pretty much reaches the head of the driver and shotgun passenger. Naturally, it's solar-tinted.

If the giant view of the road ahead bores you, there's a 17-inch touchscreen that'll pull together media playing, navigation and cabin control. (We think the latter means HVAC). In other firsts, the Model X is the first EV to have a 5,000-pound tow capacity. It's a proper SUV, yet promises a rush of 0-60 mph in 3.2 seconds and a top speed of 155 mph. The built-in 90 kWh battery on the signature model promises a run of 250 miles on a single charge. As long as you're not playing with the doors all day, presumably.

In this article: electric, electriccar, models, modelx, tesla, teslamodelx, TL16ModelX, video
All products recommended by Engadget are selected by our editorial team, independent of our parent company. Some of our stories include affiliate links. If you buy something through one of these links, we may earn an affiliate commission.