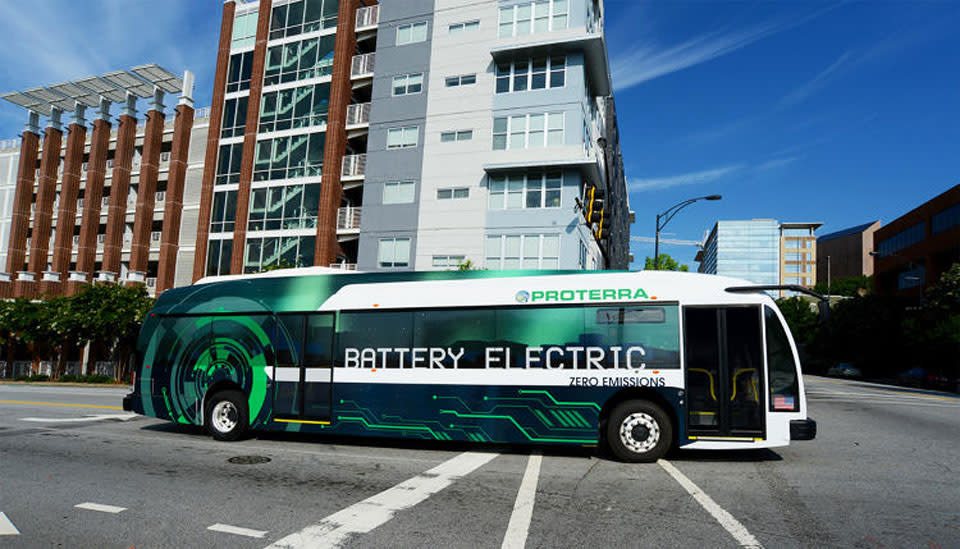 This article originally appeared on Fast Company and is reprinted with permission.

Electric cars might be sexier. But Ryan Popple, who was an early employee at Tesla, is now convinced that electric buses are more interesting.

Gallery: Meet the electric bus that could push every other polluting bus off the road | 10 Photos Proterra, the startup Popple runs, designed a sleek new electric bus that drove 258 miles on a single charge in a recent test. That's farther than most tiny electric cars can go and also farther than a daily city bus route.

That means it's ready to start to replace the hundreds of thousands of diesel buses in the country, most of which average less than five miles to the gallon and pump out carbon pollution, soot, and carcinogens like arsenic.

Because the bus saves on fuel, it's actually cheaper over a lifetime of use than alternatives, including hybrid-diesel buses or those running on natural gas. And it's something that anyone can use, democratizing the most advanced alternative transportation technology.

"We're taking a technology that's used to power $100,000 sports cars, and we're putting it into the absolute most accessible transportation asset in the country," says Popple.

Like Tesla, Proterra designed its vehicle from scratch. "I think it's important to cut ties with the legacy technology," he says. "If you tell your engineering group one of the rules they have to stick by is they have to use all the old parts from the parts bin, you're going to end up with a terrible product."

Because electric vehicles work in a fundamentally different way than something that runs on gas or diesel, the old designs don't make sense. The engine is no longer the heaviest part, and you don't have to worry about exhaust or a tank of flammable liquid. New parts—like battery packs—need to go in different places.

Some parts of the new design that were optimized for electricity also have other advantages. The bus is made from carbon fiber so it's ultra-lightweight, so the battery system doesn't have to be as big. But because it isn't made of metal, it also doesn't rust and lasts longer on the road. The weight is distributed more evenly than on a regular bus, so it's also better at acceleration and turning.

It's even easier to manufacture. "Long term, we have a huge advantage over steel bus manufacturers," Popple says. "They're building buses like you'd build a house. They build a steel frame, they rivet things onto it. At our factory, we take in a composite body just like an aircraft fuselage."

An earlier model of the bus, designed for airports or other short routes, only went 30 miles on a charge; a special battery inside could recharge in just 10 minutes. The new version uses the same technology that cars like Tesla use for long-range storage.

In the recent test, the company was hoping that the new bus would drive 200 miles on the track. But it did more than 50 miles extra, and the designers say it will keep improving. "The next milestone I think we'll hit is 300," says Popple.

In real conditions—loaded with passengers, on rough roads, and different weather—it won't go as far. But it only needs to go about 130 miles to cover an average bus route. Then the bus can charge at night. It's also designed to plug into the fast chargers that cities may have already installed along some routes.

As the battery technology improves, cities can swap in upgrades. The first buses will be sold next year to Foothill Transit, which runs routes in Southern California. Five or six years later, by the time the batteries need to be replaced, the replacements may have a range that's 100 miles or more better.

Popple is convinced that every bus will eventually run on electricity, and the question is just how soon that can happen.

"The business case works today for replacing diesel with electric, but the scale of the problem is so big," he says. "There are diesel bus companies that build 50 buses a week. We can get there—Tesla grew from building a couple cars a week to today a hundred or 200 cars a day. We know technology companies can scale faster than anyone ever expected."

Right now, he talking to a number of U.S. transit agencies. In five years, he hopes he can reach all of them. "We want to talk to that last agency that's about to buy that last set of diesel buses," he says.

He's most excited about the fact that the bus brings clean tech to everyone, rathern than making it a luxury item. When the oil industry recently rolled out a PR campaign fighting higher gas prices in California—saying that it would hurt lower-income families—Popple started thinking that the argument needed to change.

"I don't know why we're encouraging people to buy cars," he says. "It's a terrible investment, you're exposed to oil prices, you have insurance costs. What we should be doing is putting out low carbon mass transit, and helping people get back to work for pennies a day as opposed to dollars."

[All Images: via Proterra]

In this article: bus, buses, electricbus, fastcompany, gear, partner, syndicated, timeline16ecocarrange, transportation
All products recommended by Engadget are selected by our editorial team, independent of our parent company. Some of our stories include affiliate links. If you buy something through one of these links, we may earn an affiliate commission.
Share
Tweet
Share