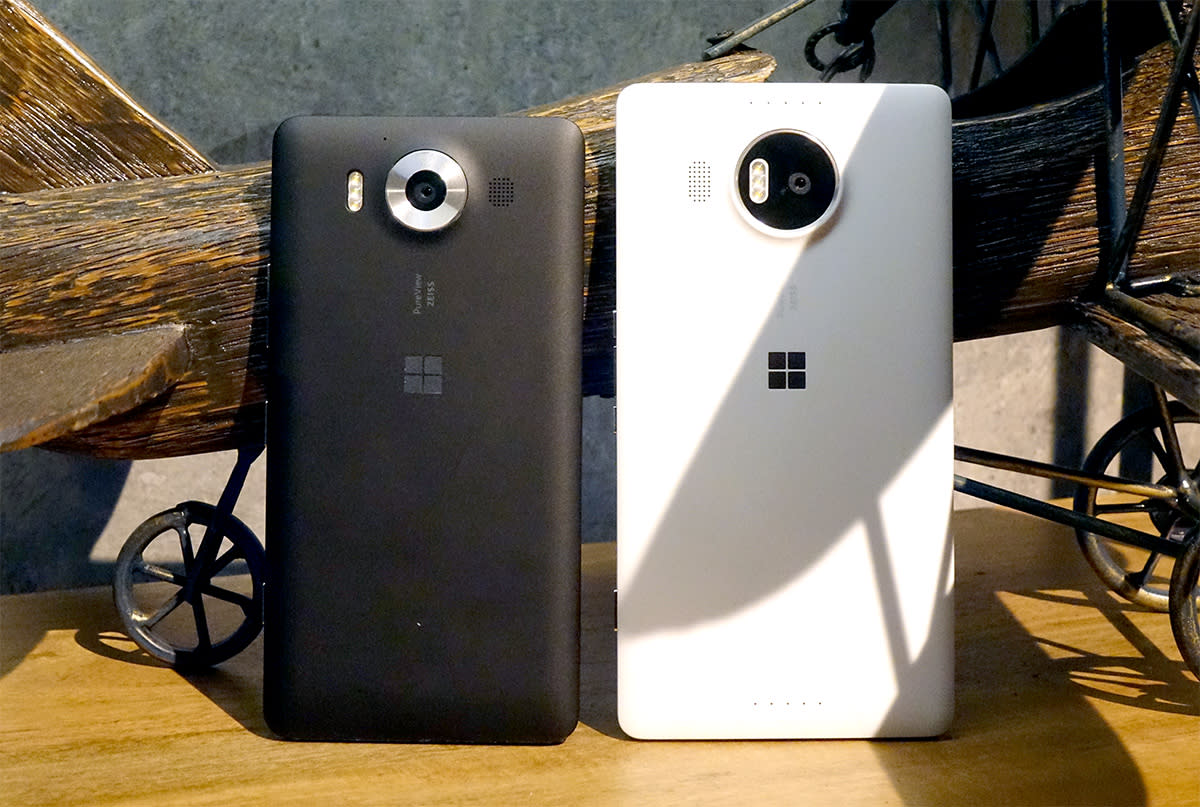 You could be forgiven for forgetting that Windows Phones were ever really a thing -- iOS and Android devices keep making headlines. After all, it's been ages since we got a high-end phone from Microsoft or one of its partners. It was... frustrating to say the least, especially if you were one of those people who fell under the spell of Microsoft's mega-marketing blitz. Now, though, we've got two new high-end Windows Phones -- the Lumia 950 and 950 XL -- ready to bring the best of Redmond's new vision of software straight into our pockets. I spent a little time here in New York City to futz around with both, and one thing seems clear: While the hardware doesn't feel like Microsoft's best, there are plenty of good ideas here.

Let's start with the Lumia 950 (and disregard for a moment how the weirdo naming scheme Microsoft adopted from Nokia would imply that this thing is somehow inferior to a two-year-old phone). It's a surprisingly light thing, with a body hewn almost entirely of plastic -- definitely not what you'd expect from a supposed premium Windows Phone. Still, between its light chassis and the 5.2-inch Quad HD AMOLED screen running up front, it's an awfully comfortable thing to hold for a while; it was a welcome change after having used an iPhone 6s Plus for a week or two.

Meanwhile, I'm told the 20-megapixel camera on the 950's back is capable of capturing better photos than even the Lumia 1020 did (with the added benefit of fitting nicely in a pocket). That's thanks in part to an f/1.9 aperture lens and optical image stabilization, and while the few sample photos I shot in this dark, rave-y warehouse environment turned out surprisingly well, I'll hold off my judgment until we can take this thing outside. The 950 also rocks a USB Type-C port along its bottom edge instead of the usual micro-USB, but a spokesperson confirmed that it'll play nice with wireless chargers too (just in case you were worried). Microsoft went with Qualcomm's hexa-core Snapdragon 808 (clocked at 1.8GHz) with 3GB of RAM to power the show and it's about as quick as you'd expect a high-end chipset to run in a Windows Phone — that is, very. The "XL" moniker might make you think the only difference is it has a bigger screen. Erm, not quite. Sure, the XL's Quad HD AMOLED display comes in at 5.7 inches diagonal, but it also packs a slightly snappier (on paper, anyway) 2.0GHz Snapdragon 810 chipset -- again paired with 3GB of RAM. I say "on paper" because Windows Phone was always one of those platforms that never needed a lot of horsepower to provide slippery-smooth performance -- that's mostly the case here too, although that speedier silicon should help when you connect the phone to a display via a dock accessory and get your Continuum on. That's probably where the liquid-cooling tech (originally seen in the Surface Pro 3) comes in -- lashing these things to a big screen must certainly be pushing these to the limit, although not many Microsoft staffers were keen to dig into detail here. I didn't mind the 950's lightness so much, but the 950 XL feels similarly airy... and lacking in the sort of material gravitas that older high-end Lumias were known for. I know, I know: I'm probably alone in loving slightly heavy phones, but at least the 950XL is surprisingly easy to hang on to thanks to its weight and despite its bigger screen. Oh, and the icing on the cake? Both phones have expandable memory slots and removable batteries.

A bombastic Continuum demo drew cheers during the presentation, and for good reason -- the ease with which these phones basically turned into tiny computers was near-astonishing. Connecting the phones to a display with the help of a tiny adapter box let the multiple Universal apps preloaded onto the phone -- think Word, Outlook and the like -- breathe easier with more screen real estate. The jury's still out on how many normal, phone-shopping consumers will want to turn their phones into mostly capable desktops, but you know what? Continuum really, properly works. Neither Lumia is equipped to seriously replace a laptop thanks to the feature, but it's a welcome touch for when you need just a little more room to get things done.

Microsoft has plenty to be proud of here: After cooking up a mobile platform that seemed destined for very little, Windows 10 feels like a really meaningful step forward. What remains to be seen is whether people shopping for smartphones will take a chance -- even a deserved one -- on Microsoft's mobile comeback. For Microsoft's sake, and for the sake of the competition that'll push all players to do a little better, I hope they do.

In this article: handson, lumia, lumia950, lumia950xl, microsoft, mobilepostcross, preview, windows, windows10, windows10devices, windowsphone, windowsphone10
All products recommended by Engadget are selected by our editorial team, independent of our parent company. Some of our stories include affiliate links. If you buy something through one of these links, we may earn an affiliate commission.