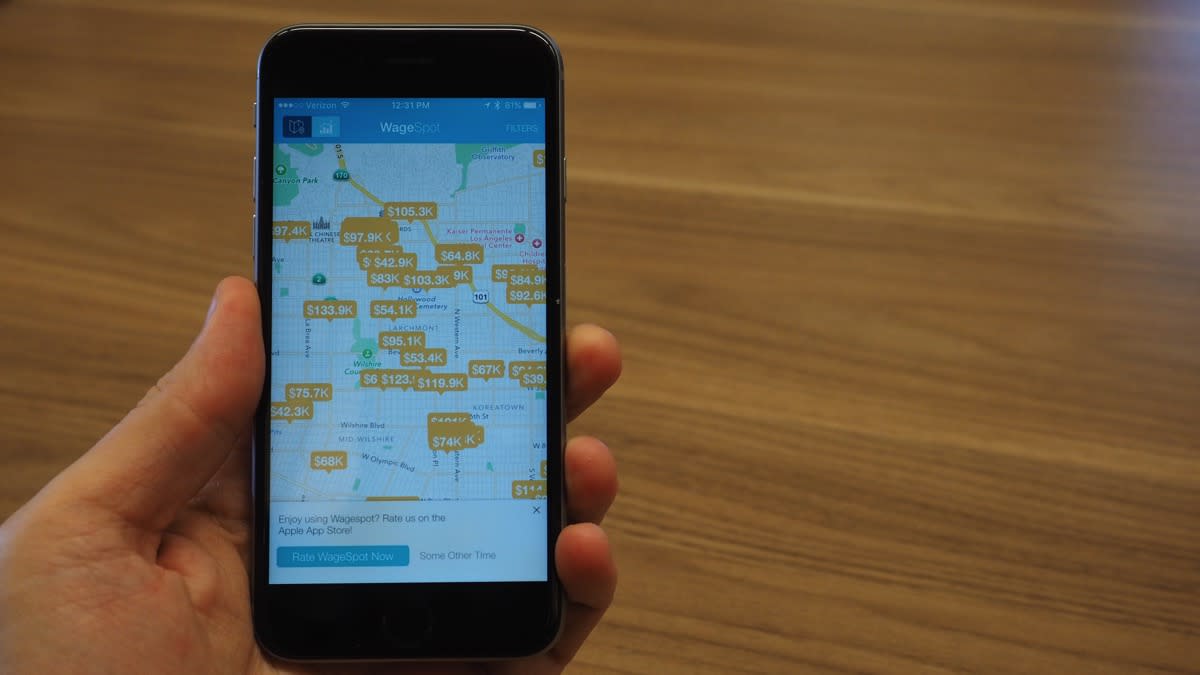 WageSpot's founders called it a "Zillow for salary data," and that's not a bad description. That's because WageSpot's main view is a map full of dots, each of which is an individual who entered their salary and job information. You're encouraged to do the same when you sign up, because without a community of users sharing data, the service will be essentially useless. You can be as public or as private as you want -- by default, you need to share your job title, salary and location, but you can also add a photo, name, age, gender and so forth. For the most part, though, you can participate in WageSpot while keeping truly personal information private.

Beyond the map view, you can slice and dice this information in a variety of ways, so the more info that people fill out in their profile, the more useful WageSpot can be. For example, you can search for everyone in your particular industry and sort it by age or gender, or by other measures like job satisfaction or years of experience. WageSpot definitely keeps the focus on location, though. There isn't a traditional "search" view, but instead that wide set of filters that you can use to show only the most relevant results to you on the map.

There's also a pretty detailed stats view in the app that lets you compare your pay against others across different industries at the country, state, city or specific zip code level. RIght now, since the app has only just launched, there isn't much data to be found -- WageSpot has been populated with publicly available information for things like government jobs or CEO salaries, and the company also added some less relevant info like salaries of professional athletes as a fun way to populate the maps. It doesn't really add much useful info for the average person, but it's kind of fun to browse around and see absurd $30 million salaries for starting pitchers in LA.

The catch for WageSpot is going to be populating its service with relevant data from users, something that gives Glassdoor and other competitive services a huge leg up. But after playing around with both the WageSpot and Glassdoor apps, it does seem that WageSpot is doing some things right here -- its app is much, much simpler to use, and there's something fun about browsing hyper-local data around you. In the same way it's kind of fun to look at houses you could never afford near you on Zillow, it's interesting to see what others near you are making. And the barrier to entry is low -- while it does feel a bit weird sharing your salary publicly, anonymity should make it relatively painless.

Whether or not the combo of data that could help your job hunt and simple curiosity to see what others near you are making will be enough to draw people in remains to be seen. If you want to check it out yourself, WageSpot is out now for iOS and Android. The company is also launching a Kickstarter with a $10,000 goal to fund its access to the all-important Google Maps API, but the app will remain free for the foreseeable future.

In this article: crowdsourcing, jobs, jobsearch, salary, wagespot
All products recommended by Engadget are selected by our editorial team, independent of our parent company. Some of our stories include affiliate links. If you buy something through one of these links, we may earn an affiliate commission.