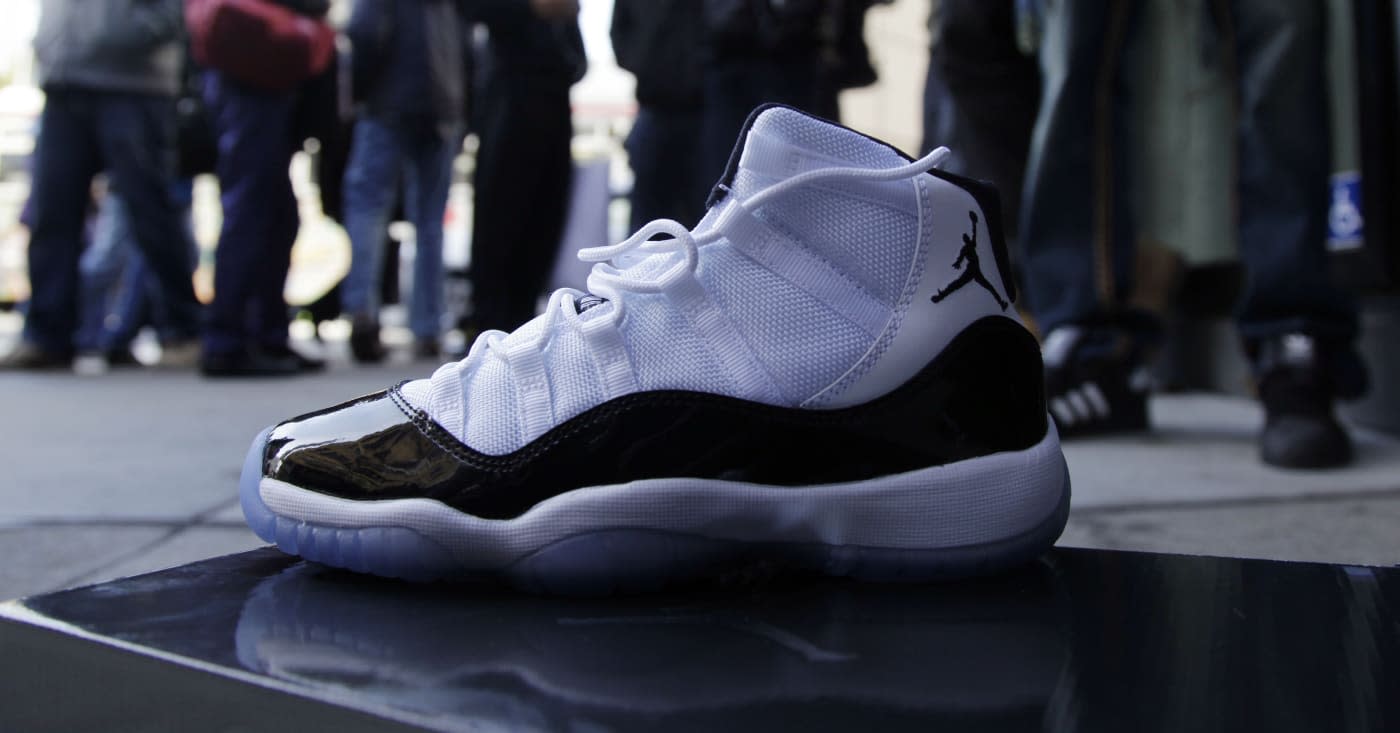 I recently bought an online shopping cart from a 16-year-old on Twitter. And when I say "an online shopping cart," I mean it: In exchange for $140, I received a login code to Nike's site that guaranteed me a pair of highly coveted sneakers, the "Chicago" Air Jordan 1s. That code was won through a Twitter-based raffle, a system Nike has started testing for limited edition releases; I had entered myself, but wasn't lucky enough to have my name drawn. Instead, while sadly browsing the social network to see how many people were chosen, I came across a young kid from New Mexico who had been picked and wasn't interested in purchasing the shoes. I reached out to him; we followed each other on Twitter; and, after vetting my character over direct messages to make sure I wasn't a scammer, he agreed to sell his "ticket" to me. It was bizarre, considering I still had to pay the $160-plus-tax retail price for the footwear. But, nowadays, it's the kind of thing you have to do to get Jordans. My other option was to find them on eBay or Amazon and shell out $400 to $500 -- more than twice as much as the original MSRP.

Here's the deal, though: I'm not talking about any sneaker. This is a retro Nike Air, the kind Jordan wore during his professional basketball career, and part of the replica models that have turned his brand into a cultural and fashion phenomenon. Since 1984, Jordan's first year with the Chicago Bulls, Nike has made 29 versions of his signature shoe, each with multiple color variations. But they're not all equal. Every now and then, a pair comes along that's special enough to make sole collectors go above and beyond to secure them -- to the point where lining up at retail shops became unsafe over the past few years. Back in December 2011, for example, during the release of a retro Air Jordan 11, there were reports of physical violence at stores like Foot Locker in California, North Carolina, New York and Texas. The next year, Joshua Woods, 22, was gunned down outside a Houston mall by three men who wanted to steal his newly purchased Jordans. He died a week later from his injuries, over a $185 pair of shoes. A screenshot of the Nike countdown page for high-profile shoe releases, such as the Air Jordan 1 "Chicago."

As it turns out, however, keeping the crowds under control is easier said than done.

Cases like these have led Nike to experiment with different purchasing methods for consumers, such as its SNKRS app for iOS and the Twitter lottery system I mentioned earlier. As it turns out, however, keeping the crowds under control is easier said than done. While the application, introduced earlier this year, was designed to provide an efficient and safe way to get access to special releases, it hasn't worked that way in practice. On May 29th, Nike announced it would be canceling the online launch of the Air Jordan 1 "Chicago," which was supposed to be the application's first real test -- since thousands of people were expected to overwhelm it, and Nike's site, with traffic. "Nike is committed to creating the most premium experiences for our consumers online," the company said in a statement regarding its decision to temporarily pull the plug on the shoe. "Bots have been compromising the experience around specific products. We're working hard to make sure real consumers are the ones getting access."

Bots are every sneakerhead's worst nightmare, especially on the day of a major launch. Shortly after Nike began selling limited edition shoes online, and via the SNKRS app, some people found a way to gain an unfair advantage over others. A bot could be self-coded and come in the form of a browser plugin, with its main purpose being to save you time setting up your order; a simple click and anyone can skip directly to a predetermined place on a website. Say Nike tweets out a link to a product page for long-awaited Jordans; you could then use your bot to have the pair added to your cart instantly -- complete with your shoe size and other personal information filled in, such as your name and address. And believe me, every second counts: The longer you take to place your order, the more likely the Jordans you want will run out of stock.

The drawing for the Air Jordan 1 begins Wednesday, 9.30 at 7pm EDT. Here's how it works: http://t.co/JINFuddsB4 pic.twitter.com/E3soq3lpXm

While one could argue that a savvy person shouldn't be frowned upon for building their own bots -- those are often associated with resellers, who are responsible for driving up the prices of sneakers on the market. These people don't buy limited-run shoes because they want to wear them; they buy to sell for a large profit on eBay, Flight Club, Amazon and other third-party sites. That's why Nike is now trying a new lottery system on Twitter, with the goal being to control the crowds at brick-and-mortar stores as well as on the web.

This is how it works: Nike sends out a tweet with a link to a retro sneaker, after which you have 60 minutes to enter the raffle. After you've signed in with your Nike+ account and entered the verification code sent to your phone, you pick your size and whether you want to have the shoes shipped or do a pick-up at your local Nike store on launch day. Within 24 hours, the company will send you an email to let you know whether you were chosen and have reserved a pair. If so, you get sent a private link to the product where you can pay for it and, voila, it's yours. (I've entered a couple of Nike lotteries to no avail, hence the ridiculous amount of money I paid for someone else's token.)

Nike, which declined to comment for this story, has completely given up on releasing high-profile shoes on its SNKRS app, at least as it intended from the beginning. Last time a limited release came out, nearly a month ago, the application basically acted as a barebones web browser that simply let you enter the raffle from within. That's not how Nike pegged it when it launched. Still, using the app to buy other types of shoes remains a pleasant experience, thanks to its big, pretty imagery and a speedy checkout process. Not surprisingly, The Swoosh isn't the only one trying to come up with a solution that works for everyone. Adidas is doing something similar with its Confirmed app, available on iOS and Android, which is designed to make it easy for people to purchase Kanye West's Yeezy Boost sneakers. The Yeezy Boost has been one of, if not the, most hyped footwear lines of 2015. Unlike Nike's SNKRS app, though, Confirmed is only available in Chicago, Los Angeles and New York City. But its purpose is similar.

Once Yeezy season hits, the Adidas app will let you know the exact date a sneaker is expected to be released and, on that day, you're able to reserve a pair and pick it up from a retail store when it comes out. That's assuming the application doesn't crumble under the heavy traffic pressure, as has been the case every time I've tried to order a pair of Yeezys -- first the Boost 750, then the blacked-out 350s. To put things in perspective, Adidas sold the Boost 750 for $350 at launch, before selling out, and now you can find them on eBay for anywhere between $800 and $3,000 (brand-new).

Real people know. I'm off the kids getting killed for Jordan's. I hate that this dude won't change that. Greedy! https://t.co/tcpL2whXVE

"Right now there's not a safe, fair and efficient way to launch products, period, and we saw an opportunity," says Brandon Beaty, director of brand communications at Adidas Originals, about the idea behind Confirmed and how the app came to be. "Today the industry standard is Twitter, or sometimes it's a Twitter-based system. Sometimes it's a manual lottery system, and there's problems with those. Some are riddled with bots; some are perceived to be unfair; some are manual. We wanted to take that out of it, streamline it, make it fair and also make it safe."

"Right now there's not a safe, fair and efficient way to launch products, period, and we saw an opportunity."

When Beaty mentions safety, he's of course referring to violence over a pair of sneakers. "The reality today is that lines out the door isn't the cool thing anymore. We used to say energy is perceived by if there's a line around the corner, but the reality is the majority of malls are actually shutting those down," he says. "Ideally, there should not be a line for a Kanye West shoe, or whatever shoe we're launching within that app, at the retailer in which you're getting it, so we're eliminating the line, but we're also still making it fair for everyone to be able to purchase it." As for what Adidas is doing to combat bots, Beaty says the app is "close guarded to those bots and threats" he sees other launch-reservation systems fall victim to. Still, Confirmed is far from perfect, and that has to do with Adidas not making enough supply to meet demand -- there aren't enough Yeezy Boosts to go around. "One thing we could do is you make more product available and then it doesn't sell out as quickly. That's not something strategically that you just turn the faucet on right away. We have a plan; we're going to build that business, in a very smart way over time," Beaty explains. "So a lot of the responses and I think frustration is that people aren't able to get the shoe, and that's a very fair frustration. What I would say is that no matter what happens along that experience within the app, no one is given an unfair advantage and that's the number one thing that we wanna make sure happens. We hope that everyone has a level playing field and everyone has the same shot at getting the shoe as the person next to them, as long as you're in that territory [where the app is live]."

Between Nike's SNKRS app and its Twitter raffles, plus Adidas Confirmed, both sportswear juggernauts are preparing well for the future of shopping, taking into account past and present elements that are going to shape the experience for consumers. Yes, there are tedious growing pains, but it beats having to wait in line at a store and risk not making it out alive -- unfortunately, that's not an exaggeration.