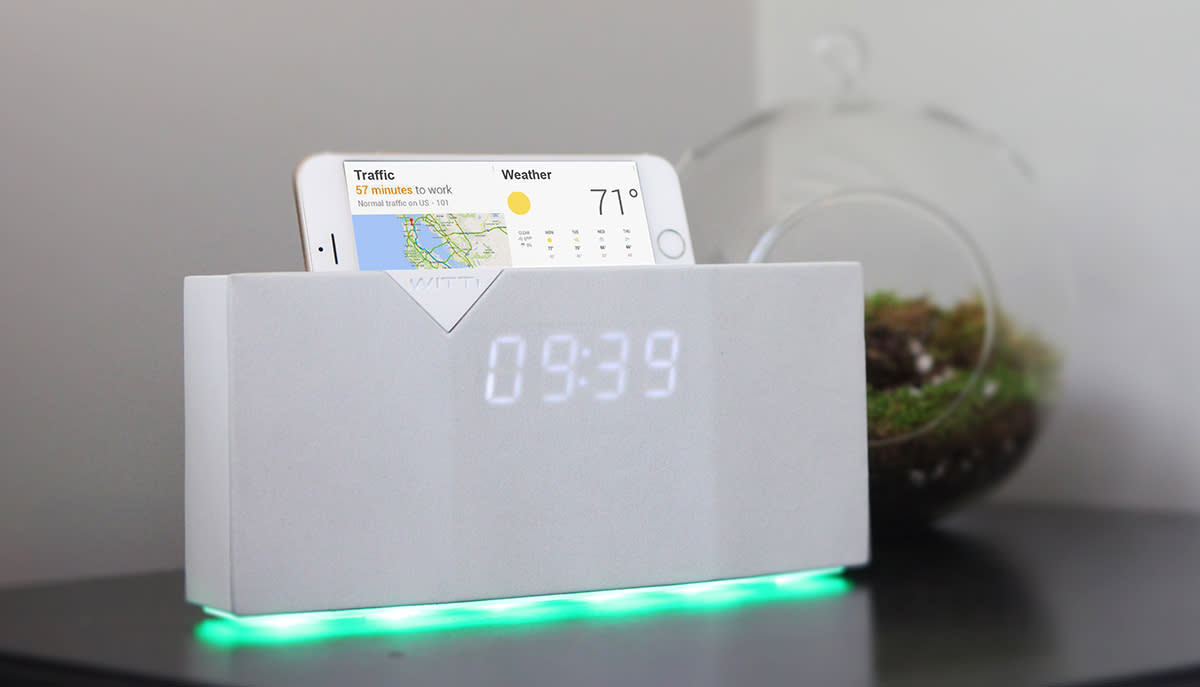 We've seen plenty of smartphone -- well, mostly iPhone -- alarm docks in our lifetime, but there's been little development on that end in recent years. OK, there was that one bacon scent alarm from Oscar Mayer, but not much else. That's why we were pretty stoked when we came across Witti's neat and affordable solution dubbed Beddi. This $100 minimalistic dock houses an iOS or Android phone in landscape mode on the top, and recharging is done via your own USB cable -- you get a 2.1A port and a 1A port on the back. But it's really all about the companion app: Once paired up over Bluetooth, you can preset Beddi's three physical buttons to either call an Uber taxi, toggle a Spotify playlist, control the temperature on your Nest or switch on a Philips Hue light. Some of these can even be automated according to your desired schedule. The dock itself also packs some goodies. You get a pair of 3W speakers that actually sound pretty good for the price, and they'll go nicely with Beddi's soothing ambient noise function or just the general music playback -- via either Bluetooth 4.0 or line-in at the back. For those who still use the old-school FM radio, Beddi has it as well. Thanks to the Google Maps integration, you can also wake up to voice-based weather plus live traffic information to get to work on time. Beddi also comes with two sets of LED lights: The one along the bottom edge serves as a 16-million color mood light, and the one on the back is a warm-white wake-up light to give you an easier start in the morning.

Not bad for a $100 smartphone dock, right? It's even cheaper on Kickstarter: You can grab a Beddi for just $75 a piece or from just $115 for two, with delivery expected in June next year.

In this article: alarm, alarmclock, beddi, clock, dock, hongkong, hue, kickstarter, mobilepostcross, moodlight, phillipshue, smartalarm, smartphonedock, spotify, uber, video, witti
All products recommended by Engadget are selected by our editorial team, independent of our parent company. Some of our stories include affiliate links. If you buy something through one of these links, we may earn an affiliate commission.