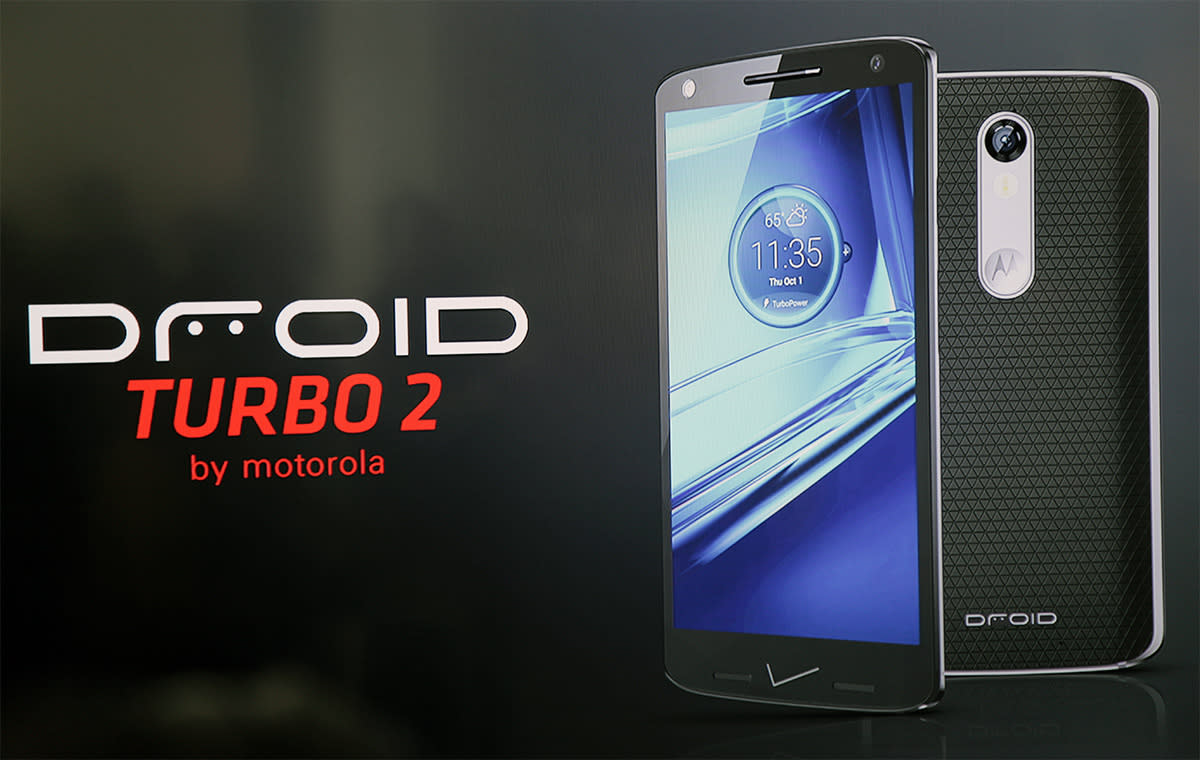 It's a little hard to believe Verizon's Droid line is six years old, and the family just keeps growing. Today, the carrier and its hardware partner Motorola pulled back the curtain on the Droid Turbo 2, a new flagship that doesn't exactly come as a surprise. If you liked the Moto X Style/Pure, you just might be a little jealous of all the extra stuff its Verizon-only cousin just got.

Just like last year's Turbo, this updated model basically takes the year's existing Moto X formula and fixes some of its notable shortcomings. Rather than stick with the Pure edition's hexa-core Snapdragon 808, Motorola paired the Turbo 2 with a beefier Snapdragon 810 chipset (just like most of its top-tier rivals). And while battery life on this year's Pure edition didn't exactly stun, Motorola President Rick Osterloh confirmed that the Turbo 2 should last through about 48 hours of mixed usage -- not too shabby. We're no strangers to mobile marketing hyperbole around here, so you can imagine how our eyebrows shot up when we heard the Turbo 2 has a "shatterproof" screen. Those are fighting words, guys, but Osterloh made it a point to drop his personal Turbo 2 on some conveniently placed cinder blocks. As it turns out, the new Turbo's defensive capabilities extend far beyond just the screen. Sure, there are two lenses covering the phone, but there's also a solid aluminum core for stability and a flexible 5.4-inch WQHD AMOLED screen that's meant to absorb some shock. Throw in a secondary touch layer in case the first one goes a little screwy and we've got a pretty robust package to compared Motorola's earlier flagship. Oh, and just to fan those fanboy flames, the Turbo 2 is the first Droid you can customize through Moto Maker -- options include a soft-grip finish, the Turbo's classic ballistic nylon and some Horween leather, among others.

If all that's got you a touch tempted, you'll be able to score a 32GB model for $26/month or a 64GB version for $30/month when the Turbo 2 hits store shelves later this week.

In this article: android, droid, droidturbo, droidturbo2, google, mobilepostcross, motorola, smartphone, verizon, video
All products recommended by Engadget are selected by our editorial team, independent of our parent company. Some of our stories include affiliate links. If you buy something through one of these links, we may earn an affiliate commission.