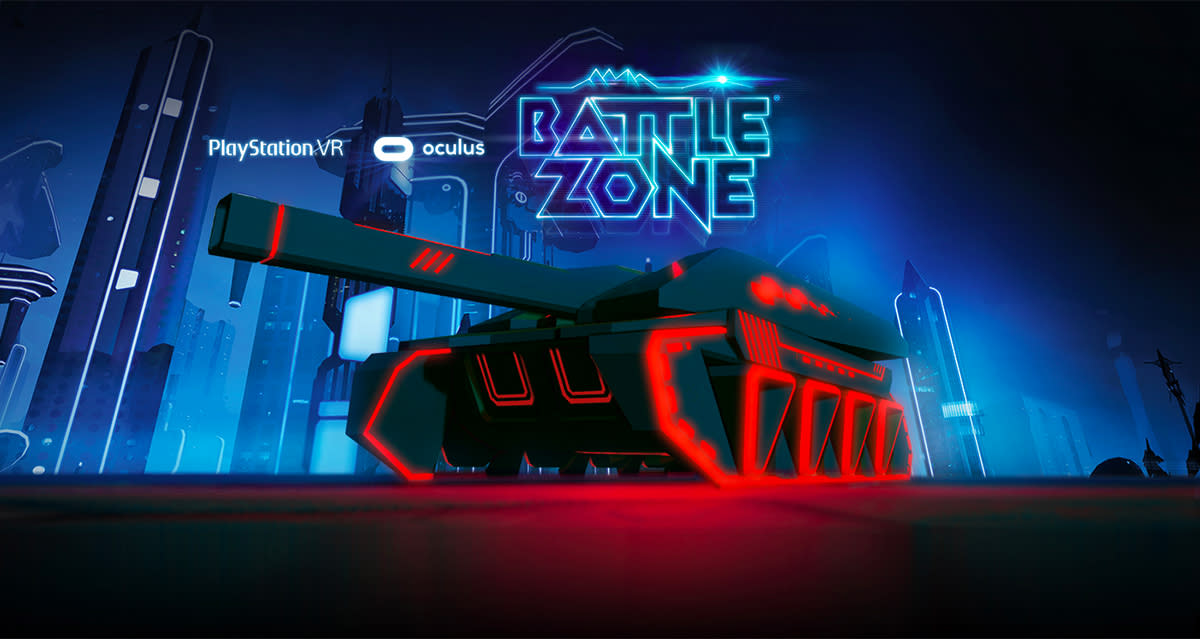 It could be argued that Atari's 1980 arcade classic Battlezone was the first virtual reality game. In a simple duel of tanks, players looked through a small opening in the cabinet to maneuver their lumbering vehicle, firing at a single enemy and avoiding being struck by projectiles. The game's wireframe design was graphically simplistic, but stenciled in thin green lines on the horizon was a single object that drew the attention of fans: an erupting volcano. Rumors swirled of a secret route that would lead players to the volcano's crater where a castle lay awaiting brave explorers. "Of course, none of this was true," Atari engineer Lyle Rains pointed out in Van Burnham's 2001 book Supercade. But that didn't stop the dreamers. In one case, a fan even wrote to Atari to tell the company he'd reached the mythical castle.

After decades of speculation, developer Rebellion, best known for the Sniper Elite series, is rebooting Battlezone for Sony's PlayStation VR and taking players into the heart of the volcano.

"It's a love letter to our roots really," said Rebellion's Head of Creative Tim Jones. Battlezone is a fast-paced take on the classic formula. As in the original, you're at the helm of a tank, but this time it's nimble, capable of strafing, boosting and even jumping. It's one of very few PlayStation VR games on display at Paris Games Week that utilized the regular DualShock 4 controller, rather than the PlayStation Move. Because of the more typical control scheme, it's easy to pick up and play without instruction.

The game is referential to the extreme. At the start of each session you see an "Insert C.O.I.N." prompt, a tongue-in-cheek backronym that stands for Combat Operative Information Nexus. The enemies you're fighting come from an evil world-conquering entity known as the Rotberg Corporation. "[Ed] Rotberg was the name of the original programmer of Battlezone" explained Jones. "He's given his blessing on that as well. He thought it was an awesome idea. It's a real thrill."

The visuals fit the spirit of the idea. Battlezone mashes the slick retro-futurism of Tron with the angular shapes of the '80s game. Some of the enemies are familiar, while new types still fit within the lore -- there are swarms of flying foes, for example, that look similar to the original Battlezone's guided missiles. In another nod to the first game, destroyed tanks break up into piles of geometric pieces. Other '80s favorites, like the UFOs that were key to racking up a giant score, will also make an appearance at some point.

Toward the end of the single-player campaign, you'll reach the volcano, allowing fans of the classic to finally fulfill their dreams.

Strangely, the gameplay itself is perhaps the least referential thing about Battlezone. Rather than the tense one-on-one combat preferred by Atari, enemies here come in waves. You'll find yourself zooming from one side of a level to another, hunting them down using your radar. It's frenetic stuff.

Catering to fans of the original game while attracting a new generation of gamers is sure to be a tricky balancing act for Rebellion. Right now Battlezone seems especially targeted at high-score chasers; at the marginalized lovers of a fast-paced arcade style that are now mainly served by indie developers. But there's the potential for the game to appeal to a broader audience as a pick-up-and-play multiplayer experience.

Although Rebellion is tight-lipped on what exactly the multiplayer component will offer, it's going to be a big part of the final game. As for the single-player campaign, it will be comprised of "bite-sized experiences" to ensure early adopters of PlayStation VR aren't plunged into long sessions without a break. This "short-but-sweet" approach also provides "an opportunity to present lots of different landscapes and environment styles," said Jones.

Toward the end of the single-player campaign, you'll reach the volcano, where the heart of the evil Rotberg lies in wait, allowing fans of the classic to finally fulfill their dreams. But the myth of Battlezone's volcano came from how much was left to the players' imagination. While I love Rebellion's dream-fulfilling aspirations, I wonder how the fans that wrote to Atari about the volcano on the horizon will feel about finally reaching it. I wonder if one team's reality can ever meet the expectations of generational legend.

In this article: atari, av, Battlezone, hdpostcross, parisgamesweek, PGW2015, PlayStationVR, PSVR, Rebellion, sony, timeline16vidreboot
All products recommended by Engadget are selected by our editorial team, independent of our parent company. Some of our stories include affiliate links. If you buy something through one of these links, we may earn an affiliate commission.