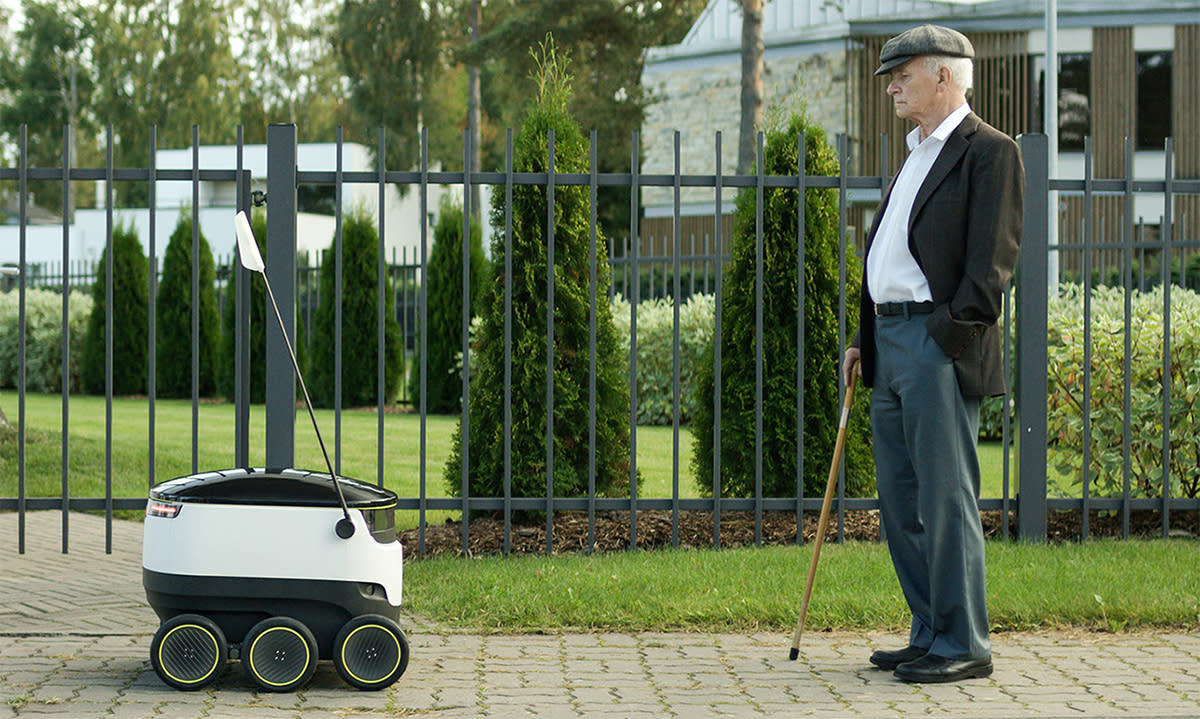 While companies like Amazon and Google are betting on airborne drones for the future of delivery, two of the founders of Skype are taking a more pedestrian approach. They've created a company called Starship Technologies, and its eponymous robots are autonomous rovers that drive along sidewalks to carry packages at an average speed of 4mph. The aim is to deliver "two grocery bags" worth of goods (weighing up to 20lbs) in 5-30 minutes for "10-15 times less than the cost of current last-mile delivery alternatives."

Starship's robots are said to be "99-percent" autonomous, which means that although they'll drive themselves, human oversight will be present at all times, ready to take control if the robot gets confused. The goods inside Starship's "cargo bay" are securely locked while it's making deliveries, and can only be opened with the recipient's mobile phone. We assume that's through a specific application, as you'll also be able to track the robot's progress as it makes your delivery.

Because of the slow speed and limited range, there would need to be a number of Starship hubs in any given city -- each hub could only serve a few miles. "Our vision revolves around three zeroes," says Ahti Heinla, CEO at Starship Technologies, "zero cost, zero waiting time, and zero environmental impact." The rovers are electric, so they're only technically as environmentally friendly as the power grid they charge from, but they're undoubtably more friendly than traditional delivery vans and bikes. The grand plan is for businesses to ship goods in bulk to hubs, and then have the robot fleet do the door-to-door deliveries. That's actually not too dissimilar from the way Amazon runs its Prime Now delivery service; it just replaces human drivers with slow-moving robots.

Starship Technologies is clearly targeting companies that want to compete with services like Amazon's Prime Now one-hour deliveries -- although there's no reason why Amazon couldn't integrate this robot into its supply chain if it proves as cost-effective as claimed. The company still has a lot of questions to answer, though. It says the robots "consume less energy than most light bulbs," but that's not exactly the most precise metric. We also don't know how much it'll cost companies to run and maintain a fleet of bots, or whether Starship can secure the necessary regulatory permission to ride on sidewalks. Assuming it can answer those questions, and the many more that'll arise in the coming months, Starship says it'll launch "pilot services" in partnership with other companies across the US, UK, and other countries in 2016.

In this article: autonomous, delivery, drones, robot, skype, starship, startup
All products recommended by Engadget are selected by our editorial team, independent of our parent company. Some of our stories include affiliate links. If you buy something through one of these links, we may earn an affiliate commission.