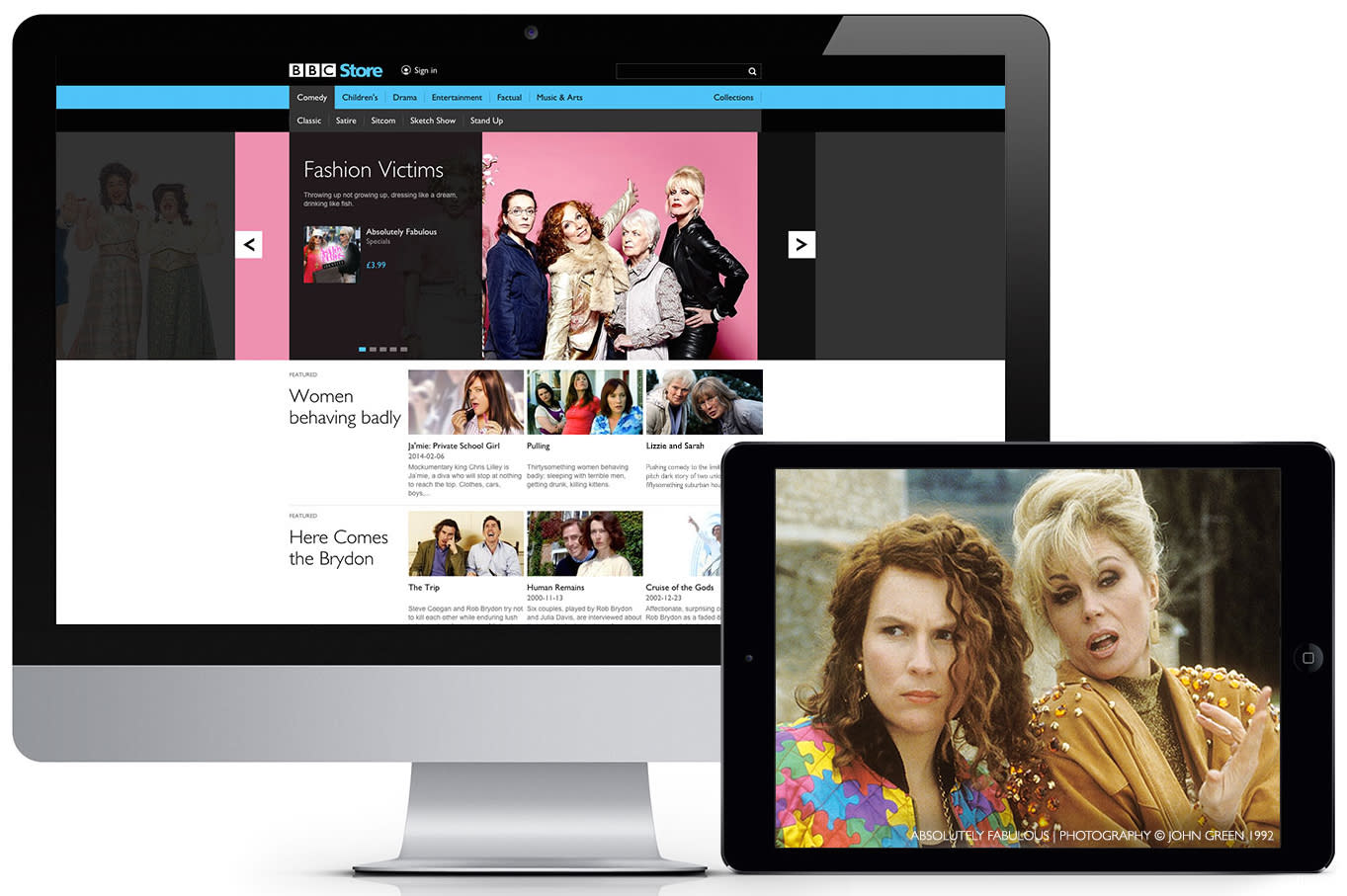 Before iPlayer existed, VHS tapes and DVDs were one of the few ways to rewatch BBC shows. Unless you caught a rerun or had diligently prepared the VCR, that is. These days iPlayer reigns supreme, but catchup is limited to a 30-day window -- so there's still a reason to buy your favourites on DVD, Blu-ray or digitally. Today, the BBC is embracing the latter with BBC Store, a new site that lets you buy, download and stream its best programming. Roughly 7,000 hours of TV is available at launch, including shows that have never been available digitally before, like Dad's Army and Morecambe & Wise.

Shows that you buy will always be available to stream through the site, whether you're on a PC, laptop, mobile or tablet. BBC Store is also connected to iPlayer, so on the web you'll find your new library in the "Purchasesd" sub-tab under My Programmes. Jumping between the two is a little clunky -- thankfully the BBC has been working on dedicated apps to streamline the experience. A "BBC Store Download Manager" lets you watch shows offline on your PC or Mac, and a BBC Store app is currently in development for Android and iOS. Eventually you'll be able to stream through the regular iPlayer apps too, although that functionality isn't ready at launch -- if you're on mobile, you'll have to make do with watching through the browser. It's frustrating to say the least, especially if you want to watch anything on your TV. The BBC says other iPlayer apps, such as those for smart TVs, set-top boxes and gaming consoles are on its roadmap, but won't be updated until the new year.

(Update: A Windows 10 app is now live. Thanks for the tip, Matthew Ashworth!) So why use BBC Store over iTunes, Amazon or Google Play? For starters, the BBC's own storefront has a significantly broader selection of shows and documentaries. Contemporary hits like Doctor Who, Sherlock and Luther will live alongside classic comedies such as Fawlty Towers, Blackadder and Absolutely Fabulous. The BBC will be pushing factual programming too, with renowned documentaries by Louis Theroux, David Attenborough and Professor Brian Cox. It'll cover shows that are currently airing too --- the broadcaster is aiming to have new episodes up on BBC Store by 1am the following day. In addition to single episodes, seasons and multi-season bundles, you'll have the option to buy a "series pass," which slowly builds out your box set as new episodes are released.

None of this affects the core iPlayer service. Shows will still be available to stream for 30 days, and the smattering of content that's been permanently archived will remain online, free to watch at any time. The BBC says BBC Store is simply a modernisation of its DVD business -- it won't affect its ambitions for iPlayer, or how it sells shows to streaming services like Netflix and Amazon Prime Video. It's promising prices that are competitive with iTunes and Amazon too, with single episodes starting at £1.89 and an average six-part series going for £7.99. There will also be SD and HD options, which could be useful if you're just buying episodes for the little ones to watch on a tiny tablet in the car. BBC Store isn't a new concept and, right now, is far from complete. None of its mobile apps are ready yet and there's no obvious way to watch programmes on your TV (I'll probably be using a laptop and Chromecast for now). Furthermore, most families already own some TV shows elsewhere, whether that's on iTunes, Google Play or the Sky Store. BBC Store is yet another siloed marketplace -- which isn't to say it's a bad one, it just makes digital ownership that little bit messier for most people. Still, if you love the BBC, this is probably a no-brainer. The broadcaster is offering a deep selection from its extensive TV archive, and wants to have at least 10,000 hours of programming available in the first year. Whether you're obsessed with Poldark or Torchwood, you're going to find it here.

In this article: bbc, bbcstore, digital, dvd, film, TvStreaming
All products recommended by Engadget are selected by our editorial team, independent of our parent company. Some of our stories include affiliate links. If you buy something through one of these links, we may earn an affiliate commission.