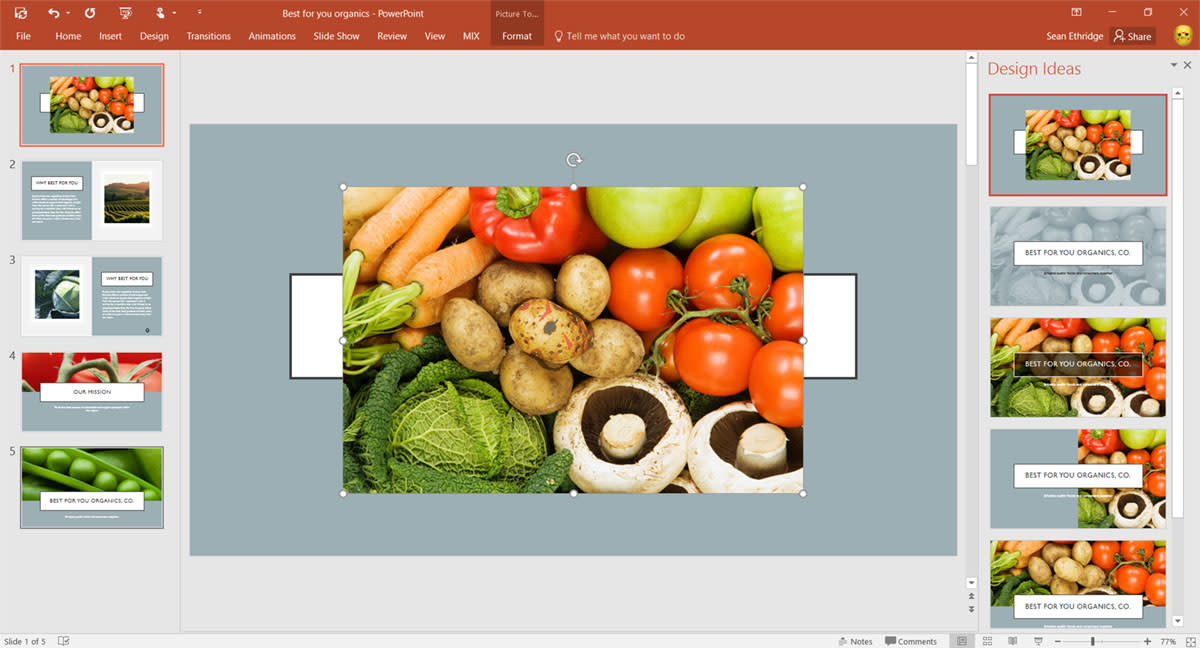 If you've ever slapped together a PowerPoint presentation at the last minute, Microsoft has an Office 2016 feature called Designer that may save your bacon. It worked with graphics pros to build about 12,000 "blueprint" design templates in total. All you have to do is select an image, and it will use the cloud "to analyze and identify the most compelling portion of your images," and build an appropriate design. For instance, it can zoom in on the tomatoes or peas (above) to build a theme, or avoid busy overlay images altogether if you have lots of charts. Once you've picked an appropriate blueprint, you just need to fill it in with your content.

To further ensure your audience won't nod off, you can put fancy transitions between your slides using another new PowerPoint tool called "Morph." It actually sounds pretty easy -- you just duplicate a slide, move the objects to the position you want to animate them to and click "morph transitions." The feature works not only with text and images, but also 3D shapes and individual characters, including text wrapping.

Both features arrive today in Windows desktop and mobile, but Microsoft says they'll come to other platforms soon as well. Redmond also launched Office Insider for anyone who wants to try such things before everybody else. It's like a less fun version of the Xbox Preview program, letting you opt into pre-release Office 2016 builds (on Windows only for now) to test out new features. To get it, you can sign up at Office 365 Office Insider page.

In this article: Designer, microsoft, Morph, Office2016, PowerPoint, video
All products recommended by Engadget are selected by our editorial team, independent of our parent company. Some of our stories include affiliate links. If you buy something through one of these links, we may earn an affiliate commission.