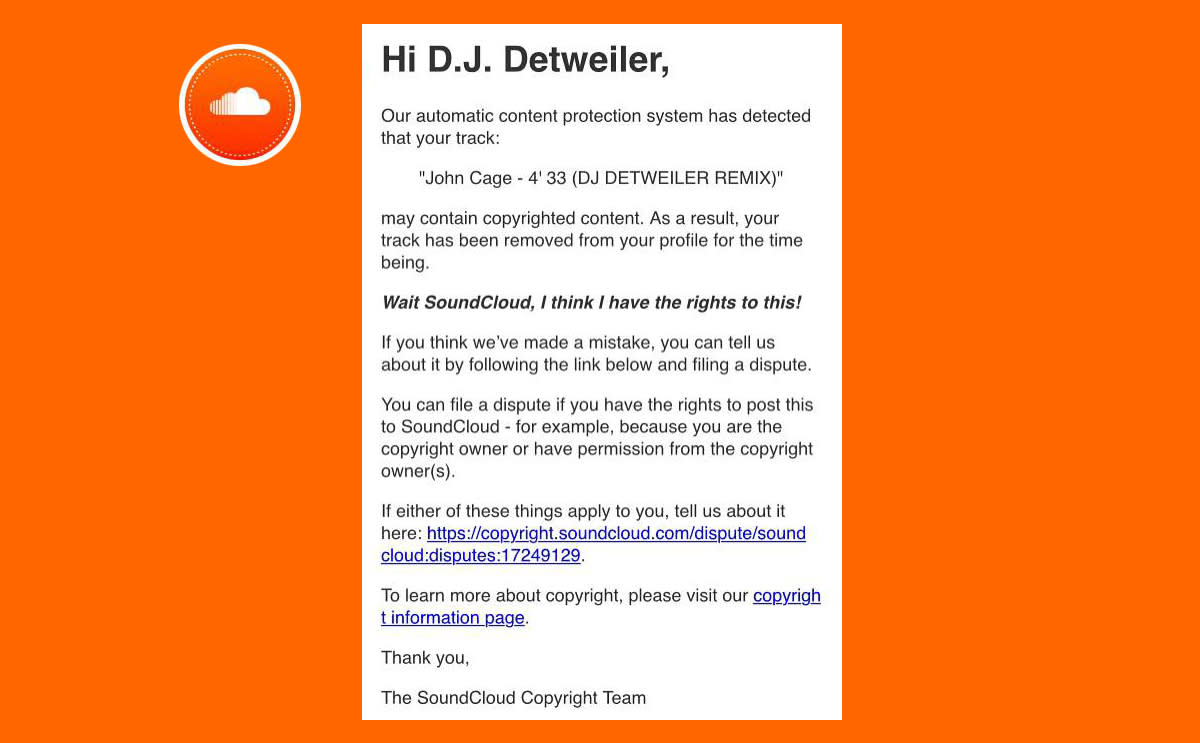 On November 22nd, artist collective DJ Detweiler posted a screenshot of a message from SoundCloud that said its track, "John Cage - 4'33 (DJ DETWEILER REMIX)," had been removed because it appeared to contain copyrighted content. The joke here is that the original "4'33"" is completely silent and a remix would supposedly be just as soundless. DJ Detweiler shared the image with the caption, "MADE A NEW REMIX TODAY, SOMEHOW THIS HAPPENED," and tagged a handful of music publications. The story was picked up online with headlines decrying SoundCloud's over-reach of copyright law and the absurdity of content-protection algorithms.

However, DJ Detweiler's "remix" wasn't silent at all, according to SoundCloud. "The upload referenced in the screenshot was not a track of silence and was taken down because it included Justin Bieber's 'What Do You Mean' without the rightsholder's permission," the company says.

The upload referenced in the screenshot was not a track of silence and was taken down because it included Justin Bieber's What Do You Mean without the rightsholder's permission. The respective user uploaded the track under the title "4'33"," which is also the name of John Cage's famous piece of silence but it was not, in fact, silence. We're happy to host any content on the platform as long as it's properly authorized. If we're told that any content has been posted without permission, we need to remove that content in accordance with applicable law.

DJ Detweiler, for its part, has been sharing stories about the "silent track" and laughing about the situation on Twitter. We've reached out to the group for comment.

Update: We spoke with four members of DJ Detweiler and learned a few things. One, they claim to be serious about reforming antiquated copyright laws and two, this whole thing is a bit of live, online performance art.

"This is a performance," one member said. "We are making a remix of the original performance of John Cage. The only different thing is that we are making it on the internet in 2015, instead of doing it in a space like a theater, like John Cage did."

Another member chimed in, "The whole environment around what we're doing is the performance because everybody's reacting."

The first member continued, "You can not buy '4'33"' by John Cage on CD or vinyl because it doesn't exist. '4'33"' is actually something that has a place in a theater. So, this is our remix."

A third voice added, "All the content that comes out from this is part of our remix."

That means I'm part of the remix and so is anyone reading this story (that means you). Regarding copyright laws, the DJ Detweiler artists asserted they were serious in making a statement, with one member noting, "When John Cage wrote that piece, one of the main reasons was because he was trying to ask, who owns the silence? Who has the copyright for the silence?"

The conversation meandered but eventually came back to a central question: "What can you not copyright at this point? Can you copyright a heartbeat?" one member asked.

"The laws surrounding copyright at this point seem highly outdated and need some sort of reformation, and we just want to push that," a final member said.

As for the original, "remixed" track -- the DJ Detweiler members were cagey about whether it actually contained silence or a Justin Bieber song. Besides, they argued, it didn't matter. This conversation was the performance and the remix was right here, right now, live on the world's stage. The artists are participating in a panel discussion about branding, hype and trends on Saturday at the 3hd Festival in Berlin -- and this strange little story certainly includes all three of those descriptors.

"I AM A JOURNALIST FOR AN INTERNET MAGAZINE" STARTER PACK pic.twitter.com/4nBuhZ3RsV

In this article: 433, art, av, culture, djdetweiler, entertainment, internet, JohnCage, joke, practicaljoke, prank, silence, soundcloud
All products recommended by Engadget are selected by our editorial team, independent of our parent company. Some of our stories include affiliate links. If you buy something through one of these links, we may earn an affiliate commission.